Gentlemen of the Road Stopover 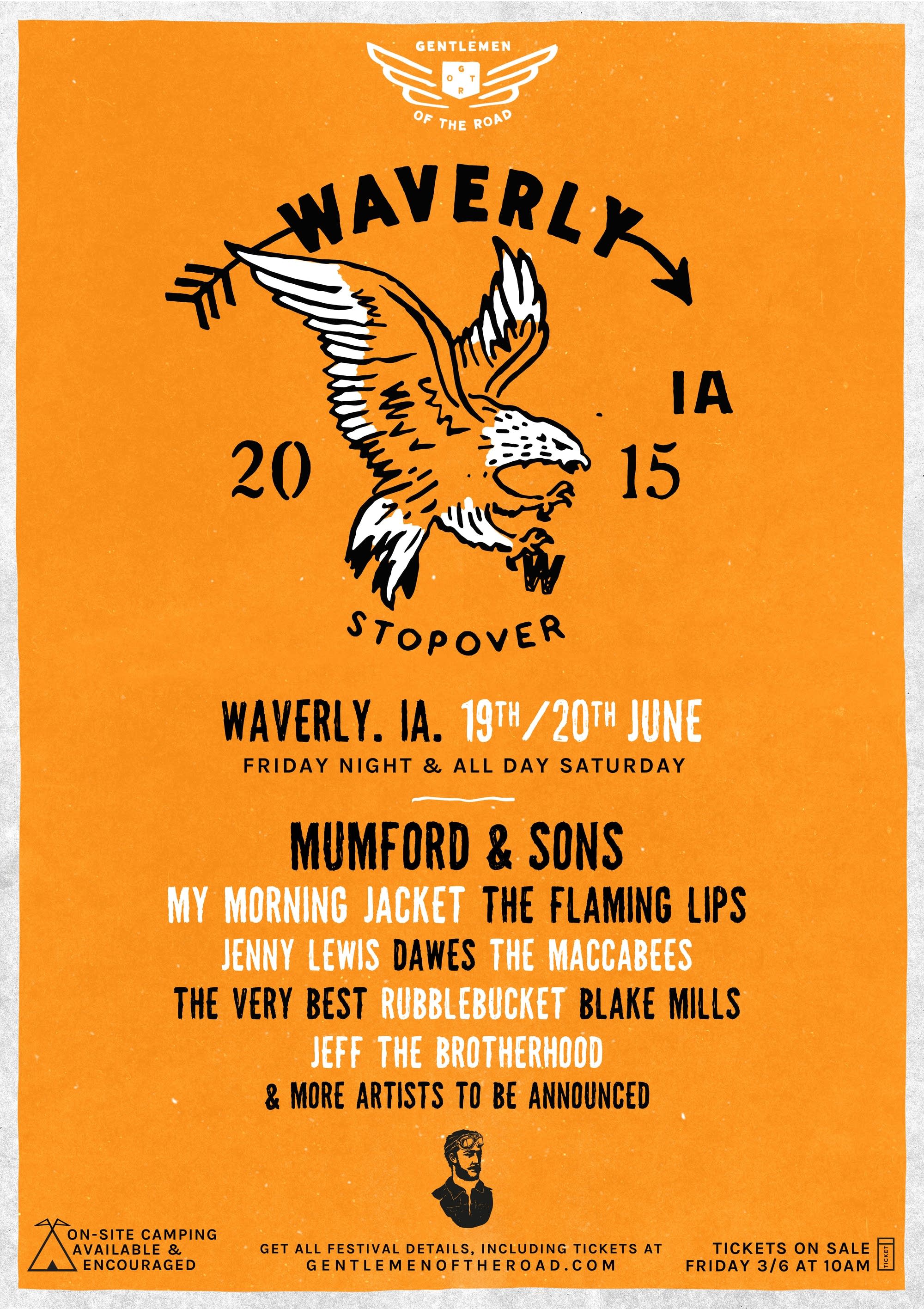 
Theft of the Dial: Mumford and Sons Mumford & Sons are pleased to announce the details of their forthcoming Gentlemen of the Road Stopover in Waverly, IA on June 19 and 20, 2015. The Stopover includes numerous internationally acclaimed artists including the Flaming Lips, My Morning Jacket, Dawes, Jenny Lewis, the Maccabees, the Very Best, Rubblebucket, JEFF the Brotherhood, Blake Mills and more to be announced. Each Stopover is a two-day event that combines the intimacy of a community celebration with the excitement of a world-class music festival. Mumford & Sons will headline the Saturday shows, alongside an eclectic and energetic roster of artists curated by the band themselves. A series of smaller events involving local businesses, venues, and, most importantly, local people will happen in and around the town. About this year’s upcoming Stopover tour, Mumford & Sons said: “The Gentlemen of the Road Stopovers are all about live music. We get to put them on in towns not normally frequented by touring bands in busses or splitter vans. We deliberately look for towns that have something unique, or some vibe of which they are proud, explore them and enjoy what they have to offer.” The Gentlemen of the Road Stopovers announcement comes with news that band will soon be releasing their third album, Wilder Mind (now available for pre-order). Wilder Mind will be released in North America through Glassnote Records on May 4. It is produced by James Ford (Arctic Monkeys, HAIM, Florence & The Machine). It features twelve new tracks, written collaboratively by the band in London, Brooklyn, and Texas. A number of the new songs were written and demoed at Aaron Dessner’s (The National) garage studios in Brooklyn. The band also returned to Eastcote Studios in London, where they recorded Sigh No More, for further writing and demo sessions. The album was recorded at AIR studios in London. This new album marks a significant departure for the young British band from their previous records, 2009’s Sigh No More, and 2012’s Babel. The early sessions in New York and London witnessed a change in the band’s approach not just to writing and recording, but to texture and dynamics, too. There is a minimalist yet panoramic feel to the new album, whose sound Marcus Mumford describes as “a development, not a departure.” It came about by both accident, and by conscious decision. “Towards the end of the Babel tour, we’d always play new songs during soundchecks, and none of them featured the banjo, or a kick-drum,” says Marcus Mumford. “And demoing with Aaron meant that, when we took a break, we knew it wasn’t going to involve acoustic instruments. We didn’t say: ‘No acoustic instruments.’ But I think all of us had this desire to shake it up. The songwriting hasn’t changed drastically; it was led more by a desire to not do the same thing again. Plus, we fell back in love with drums! It’s as simple as that.” “It felt completely natural, though,” says Ben Lovett, “like it did when we started out. It was very much a case of, if someone was playing an electric guitar, drums were going to complement that best; and, sonically, it then made sense to add a synth or an organ. We chose instruments that played well off each other, rather than consciously trying to overhaul it.”
Tweet