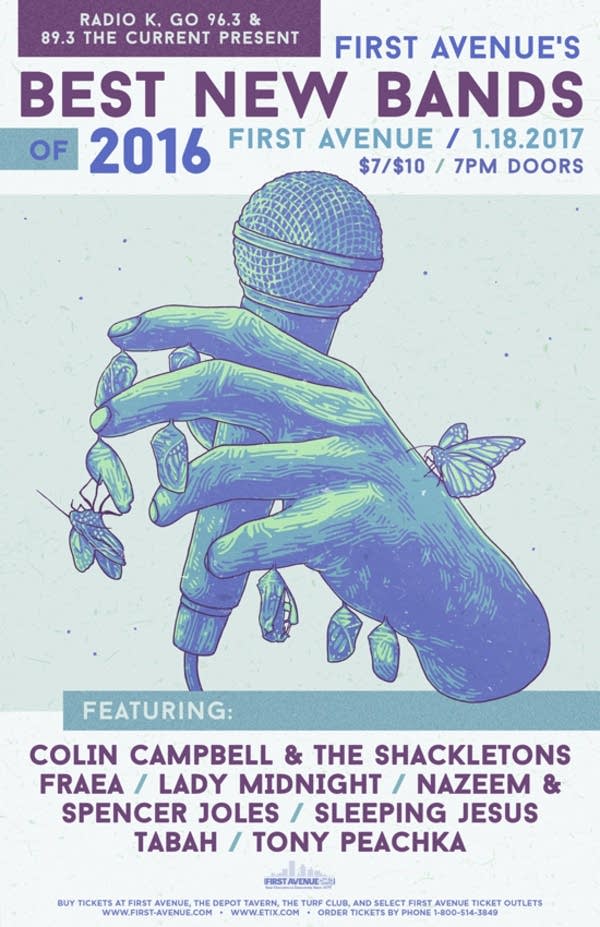 
Colin Campbell and the Shackletons

Colin Campbell and the Shackletons are a rock and blues band out of the Twin Cities writing and playing songs rooted in the rich influence of the “Minnesota Sound.” The band at its core consists of Colin Campbell (vocals/guitar), his older brother, Cameron (Bass), and younger brother Evan (Drums/miscellaneous screaming). Living a double life as both a knee-buckling indie rock band as well as a stomp-your-foot-through-the-floor blues band, Colin Campbell and the Shackletons have been generating buzz throughout the Twin Cities area. Read more »

Fraea is the Minneapolis-based duo of Jessie Daley and Drew Preiner who together combined to create musing, hypnotic shadow pop. Bend Your Bones, their debut EP, is a sonic landscape that’s so colorful it's dark, so moody it's approachable, so pixelated it's smooth. Read more »

"Lady Midnight has developed her chops by playing in wide-ranging groups like the electro-pop trio VANDAAM and the horn-fueled Afro-Cuban band Malamanya. There's never been a better time to take a closer look at this entrancing singer, however, as she emerges as a solo artist. [...] It's hard not to picture Sade lounging on a yacht in the Caribbean, or Lady Midnight herself coolly driving around town with the top down." – Andrea Swensson, The Current

Sleeping Jesus, the soft-spoken hopeless romantic, paces his third story apartment humming the melody to what would be “Brooklyn”. Caught flatfooted by unlikely love, uncertainty of what a summer in New York may bring, and the reality of a fleeting youth. New York falls through the cracks; he spends the mid west summer recording and writing what would soon become Perennial, his debut EP release. Perennial sweetly delivers a dose of nostalgia with the feeling of being torn apart by the surrender to love’s binding grip. Read more »

TABAH is a new sound for Minneapolis to hear,” says Minnesota Public Radio’s 89.3 The Current. This spirited and dynamic group is committed to their pursuit of a sound that is uniquely theirs, alive in the present and grounded in the past. The band found their roots when lead singer and guitarist, Cecelia Erholtz met bassist Charlie Bruber in 2013 at a benefit concert at St. John’s University in Minnesota. Fueled by a mutual interest in Crosby Stills, Nash & Young, they began writing original music together at their home studio in Minneapolis. Read more »

Nazeem Cunningham met Spencer Joles in middle school, and neither expected to be making music together almost a decade later. “I kind of just went up to him and started freestyling, but we wouldn’t ever freestyle about anything or have it rhyme. It would just be ridiculous,” Joles said. By the time the collaborators, now both 20, made it to Southwest High School, they began writing music seriously, and the two have been close collaborators ever since. “Sometime in high school we realized we could actually kind of make music,” Cunningham said. Read more »

Tony Peachka is what happens when teenage angst hits drinking age. The group — singer/guitarist Melissa Jones, guitarist Stephanie Jo Murck, bassist Danielle Cusack, and drummer Hayley Briasco — stand on the stoop of their northeast Minneapolis practice space, roaring and laughing well above the music permeating the building. They burst into the echoey room and collapse onto secondhand sofas, immediately spilling into self-deprecation and innuendo. Read more »