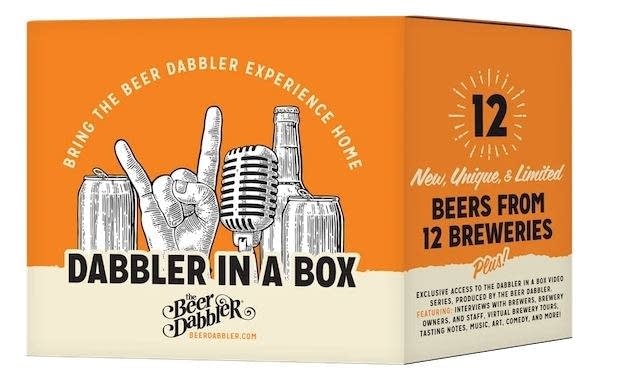 
What is Dabbler in a Box?

Dabbler in a Box is a beer and cider sampling package series featuring 12 different limited and seasonal offerings from 12 different local breweries and cideries, curated by The Beer Dabbler. It's one of the only mixed packs featuring multiple breweries available in our state, and contains a mixture of 12 and 16oz cans, and one crowler.

Price per-box is $65 before tax. Pre-order Dabbler in A Box Season 2 today through August 26!

All boxes not picked up by Sept. 9 will be released to the public. All orders not picked up during the designated pickup dates are subject to refund and a $10 restocking fee.


What else is in the box?

To enrich your home dabbling experience, we've created an exclusive video series for Dabbler in a Box. Episodes are filled with entertainment, such as interviews with brewery owners and staff, virtual brewery tours, tasting notes from brewers, plus music from local artists like NUR-D and Pert Near Sandstone, trivia from Trivia Mafia, live art from D.Witt, and more entertainment to be announced. Check out our video series for Dabbler in a Box – Season 1 here!

Also included in the box will be two Beer Dabbler tasting glasses, plus more fun swag from breweries and sponsors to be announced.