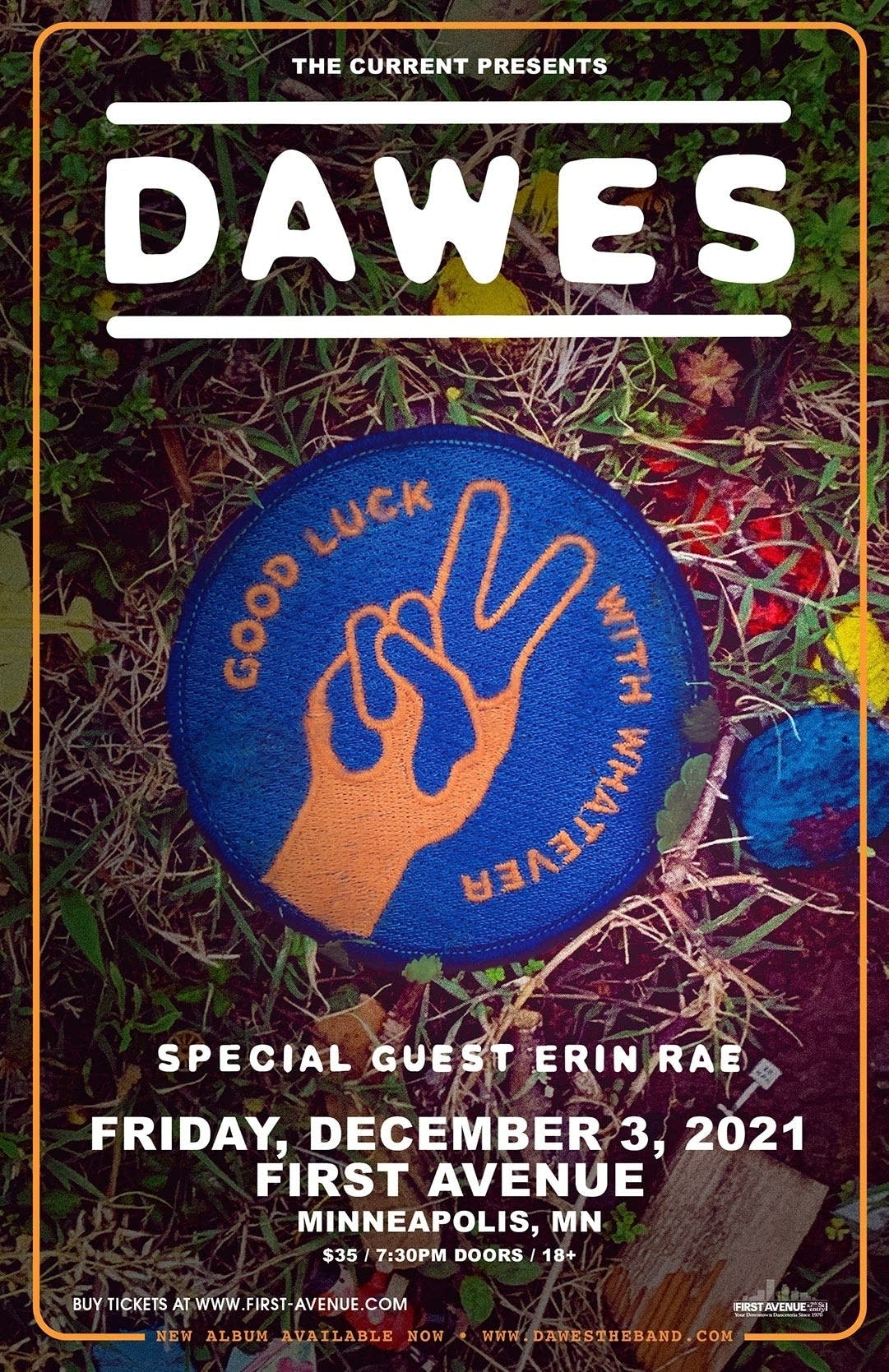 From the first downbeat, Good Luck With Whatever, the seventh studio album by the Los Angeles based rock band Dawes, sets a tone all its own. The album unfurls with the crunchy chordal cadence of what could only be Goldsmith’s guitar. As the band quickly hop their way aboard this rhythmic rail car, we find ourselves thinking “Hey, these guys are pretty good. I’m so glad you dragged me to see some live music!” — “Still Feel Like A Kid” serves as a reminder that we all love a good filet, but there’s no shame in still ordering off the kids menu from time to time. You can hear the eye contact in the room, you can see the lyrics as they fly from Goldsmith’s mouth straight into your ears, you’ll find yourself singing along to a song you’re hearing for the first time. It’s fresh, it’s raw, it’s a four tiered seafood tower of all American ear candy. Think “I Don’t Wanna Grow Up, I’m A Toys R Us Kid” meets “I Wanna Be Sedated”.

Recorded at the historic RCA studios in Nashville Tennessee, the boys teamed up with six time Grammy award winning producer Dave “Corn On The” Cobb (Brandi, Jasi, Chrisi, Stergi, etc) and just decided to LET IT RIP. “We were out in Nashville for just under 730 hours, or 1 human month” says bass player and resident ‘problem child’ Wylie Gelber. “We wanted that sloth like urgency, that cold heat, that all knowing curiosity. And me thinks that’s what we got.” The arrangements are as lively as they are lovely, from the rapidly ruckus “Who Do You Think You’re Talking To” to the robustly restrained “St. Augustine at Night”. A culmination of their entire catalogue and career all wrapped up in nine tracks. If you don’t know Dawes by now, you will never never never know them…

Far from apathetic, Good Luck With Whatever is Dawes at their most unapologetic. It’s sympathetic and magnetic, 50% genetic and highly kinetic. Songs like “Didn’t Fix Me” and “Me Especially” showcase Goldsmith’s poetic prowess perfectly; a historian of the human condition, transforming turmoil into motor oil. Drop the tone arm down, turn the volume up, unplug the phone and if you still feel nothing… call a doctor.

Having self-released their music for the last 1/20 of a century, Dawes has now joined forces with their former legal council now president of Rounder Records, John P. Strohm. Attorney client privilege has been lifted. Finally without the constraints of the fat cats up on Capitol Hill and their ever flowing spools of bureaucratic red tape, Dawes and their beloved ex-ambulance chaser are together again. Court is in session and they’re prepared to tell the truth, the whole truth and nothing but the truth.

“We’ve learned so much over the years about what it means to be A BAND” says drummer/free range dog farmer Griffin Goldsmith, “I used to want all our records to be ONLY drums, but I’m finally starting to realize, maybe a lil’ bass, keys, guitars and vocals ain’t so bad after all.” How right he is, the ballet of interplay between these four is nothing short of breathtaking. Where Griffin dives, Wylie ducks. Where Taylor weaves, Lee is sure to bob.

Dawes began their journey in the San Fernando Valley back in 2009, it was the year of the Ox, but don’t be fooled, these guys are No Bulls#$t. Having played with, for, and against some of rock’n roll’s most illustrious icons, the merry men have picked up more than a few things when it comes to sticking around and what it means to be a true BAND. “Sometimes I wish I did hate my brother”, explains frontman/stuntman Taylor Goldsmith, “might sell us a few more books… but the reality is, I can’t get enough of the guy! Scariest part bout’ it all is, knowing we’re gonna be playing music together for a long, long time.”

Gifted with a unique ability to fuse musical genres and influences to craft songs that feel fresh and wholly her own, with her new album Putting On Airs, Erin Rae has thrown down a direct challenge to the stereotype of what a Southern singer should be. Both lyrically and sonically, she strikes a fiercely independent chord, proudly releasing a deeply personal record that reflects her own upbringing in Tennessee, including the prejudices and injustices that she witnessed as a child that continue to impact her life to this day. According to Rae, "this album was born out of a need to do some healing work in my personal life, in order to address some fears and patterns of mine to allow my true feelings to come to the surface."

Buoying the release is Rae’s reputation as an enthralling live performer, which has earned her the respect of Nashville peers and music notables alike, including Grammy Award winner John Paul White, who has signed her to his Florence, Alabama-based label, Single Lock Records. Rae joins a Single Lock roster that includes Nicole Atkins, St. Paul And The Broken Bones, and White himself, who said “When I first heard Erin’s compelling voice, I knew nothing about her. It was live, with no intro (she was opening for friends of mine), and I was instantly transfixed. I couldn’t wait to engage, and that’s something I very seldom feel, much less do. I was thrilled to find out her personality was as engaging as her voice and songs, and that she was looking for a home. I couldn’t be happier to be hitching our wagons together.”

Recorded in the dead of winter at The Refuge, a historic former Franciscan monastery-turned-creative space on Wisconsin’s Fox River, the isolated environment created the perfect setting for Erin and her bandmates to track these genre-busting songs, using the chapel and other unique spaces within the cavernous building to explore new sonic boundaries, all while continuing to showcase Erin’s trademark vocals and the song-serving restraint first heard on her critically-acclaimed 2015 debut album, Soon Enough (engineered and produced by Anderson East and Mike Rinne).

The unique sound of the record is inspired by the innovative 1960s European production techniques from artists like the Beatles and Francoise Hardy, paired alongside the restraint and minimalism of modern artists like Wilco and Richard Hawley, bridging the sonic gap between classic songwriting and a modern indie-rock ethos. The album was co-produced by engineer Dan Knobler (Rodney Crowell, Tift Merritt) and multi-instrumentalist Jerry Bernhardt. Dominic Billett also served an integral role in the collective that worked together to create the album’s innovative and varied sonic pallet, providing the perfect soundscape for Erin’s soothing vocals, bathing everything in the warmth and purity that has become her trademark sound.