Rock The Suburbs with Suicide Commandos and Scrunchies 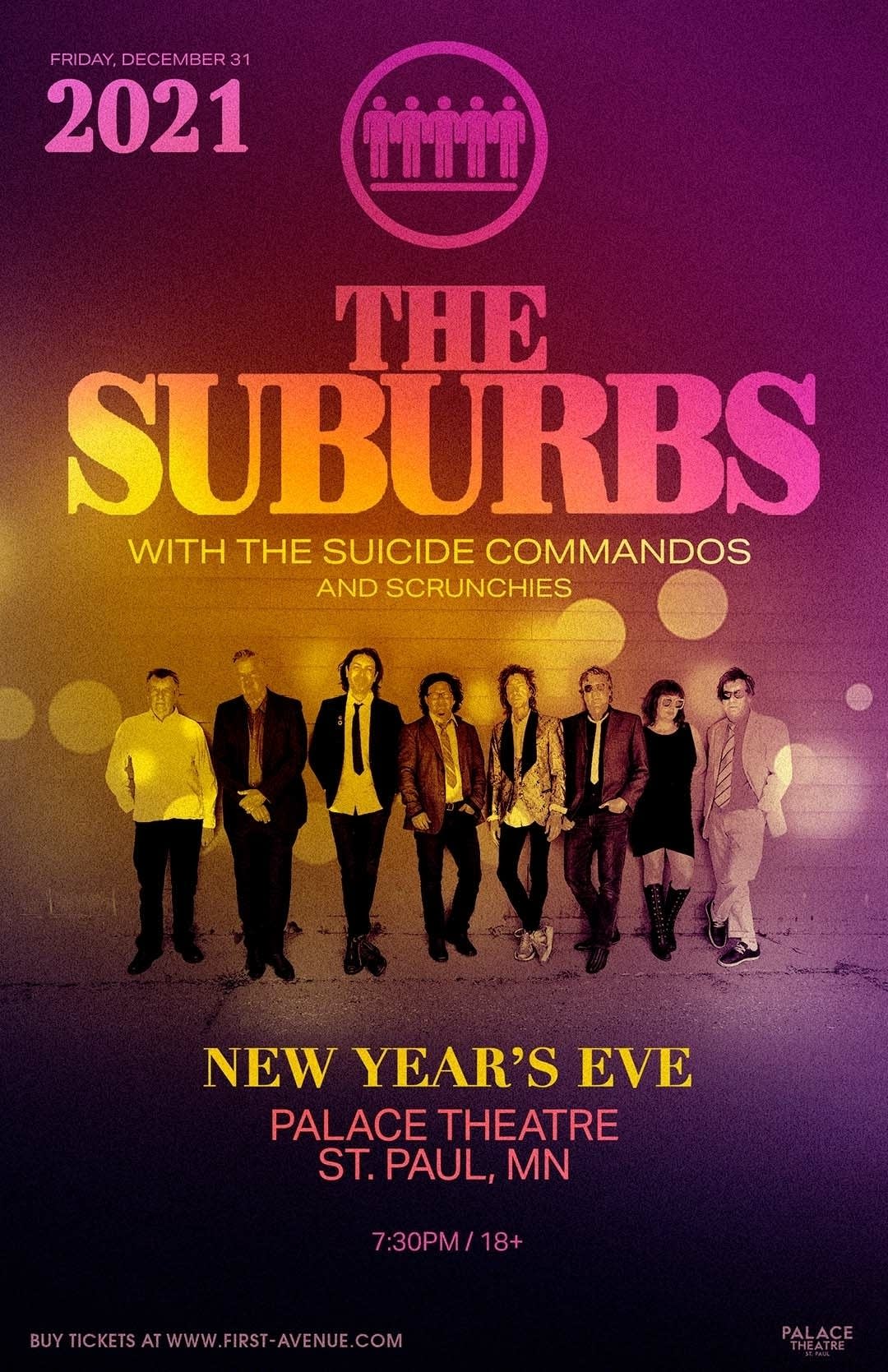 Often described as a Midwest Roxy Music, but with more humor and rock scruff, The 'Burbs have been making their unique punk-pop-art-dance records and performing off and on ever since the ‘Mpls Sound’ heyday. Founded in 1977, The Suburbs are recognized worldwide as among the original heroes of the "Minneapolis Sound”; a historic music era that saw the emergence of other bands like The Suicide Commandos, Prince, The Replacements, and Hüsker Dü.

Led now by original keyboardist and singer Chan Poling, original drummer Hugo Klaers, and longtime saxophonists Max Ray (also of The Wallets), they are augmented by a supergroup of newcomers: Stevie Brantseg and Jeremy Ylvisaker on guitars, Steve Price on bass, Janey Winterbauer on backup vocals, Rochelle Becker on Bari Sax and Stephen Kung on horns and keys.

Voted among the "100 Most Influential Minnesota Musical Entities of the Twentieth Century" by The Minneapolis Star Tribune, with dance-club hits like “Waiting” and ”Music for Boys", and radio hits like ”Life Is Like”, “Rattle My Bones”, and the 2013 Marriage Equality Anthem, "Love Is The Law”, The Suburbs could be forgiven for resting on their laurels.

But the music and accolades keep on coming. "Turn The Radio On" from their 2013 album Si Sauvage was voted "Song Of The Year" by a poll of local music critics in the Mpls Star Tribune, and The New Yorker magazine, praising their last release Hey Muse!, wrote; “The ensemble maintains its quirky spunk and funky pop energy”.

The Suburbs continue to entertain at the highest level and remain one of the most creative and vital bands out there today, honoring their past and blazing into the future.

The year was 1975 and on the pre-disco music scene in the Twin Cities of Minneapolis/St. Paul, cover bands ruled. Outside of a handful of bars and campus coffeehouses that comprised the local folk/blues scene, working musicians had little choice: If you wanted a paying gig, you had to play other people’s hit songs. But when the Suicide Commandos played their first gig in September 1975 at the Blitz Bar in downtown Minneapolis, they changed everything.

Here, suddenly, was a real “alternative rock” –a stripped-down three-piece comprised of guitarist Chris Osgood, bassist Steve Almaas, and drummer Dave Ahl (all of whom sang), whose sets combined original songs with rarely–heard pre-punk nuggets. And every tune was delivered with the raw energy that once had fueled the fabled Twin Cities garage–rock scene of the 1960s, when bands like the Litter, the Underbeats, and the Trashmen ruled the roost.

From these humble beginnings grew one of the most fertile and productive scenes of the American indie/alternative rock explosion of the 1980s and ‘90s. The Suicide Commandos’ pioneer­ing efforts paved the way for the Suburbs, the Replacements, Hüsker Dü, Soul Asylum, Babes in Toyland, and so many more.

Tickets go on sale to the public on Friday, September 10 at 12 p.m. Sign up for Cross Currents to get access to a special presale on Thursday, September 9 from 10 a.m. to 10 p.m.