Minnesota Center for Books Arts Director Jeff Rathermel is clear about why he's put on this latest exhibit: he wants people to get interested in collecting books.

"There are many different ways to display books," says Rathermel. "You can collect them for their bindings. You can collect them for their content, for their art, their printing, their typography. There are just so many different elements that go into a book. And these are everyday objects that people feel comfortable with, so they're just these natural collectibles that we like to have around us."

Ethiopian Scroll of Protection, 19th century, from the Hill Museum and Manuscript Library. Sometimes referred to as "magic" scrolls, these works were created for protection against different species of the "Evil Eye." The opening image is probably that of the Archangel Raphael, with drawn sword. Below it is a "bandlet of righteousness," also from Ethiopia. (MPR Photo/Marianne Combs)

The exhibit is called "Beyond Words: The Collectable Book." It draws from several private and public collections around Minnesota. One collection focuses on the work of Henry David Thoreau, another on African American works, another on gay, lesbian, bisexual and transgender books. The books range from a 15th-century bible to modern-day 'zines. And some objects in the exhibit, frankly, don't look like books at all. There's a piece of paper cut and folded to expand like an accordion, and a box filled with cards. Rathermel says he has a very liberal definition of the book.

"What I look at is that from the onset the artist had the idea of the book in mind to begin the project, so even though it might not end up as what we might think of a book--let's say an installation or a performance piece--it still had its inspiration from the book form or book history," says Rathermel.

Some of the more traditional books you wouldn't think of as being real collectibles. On one wall hang several replicas of covers of pulp fiction paperbacks. These are from the Hess collection at the University of Minnesota. The originals are too brittle to put out on display, but the covers are a colorful throwback to the 1930s and '40s. 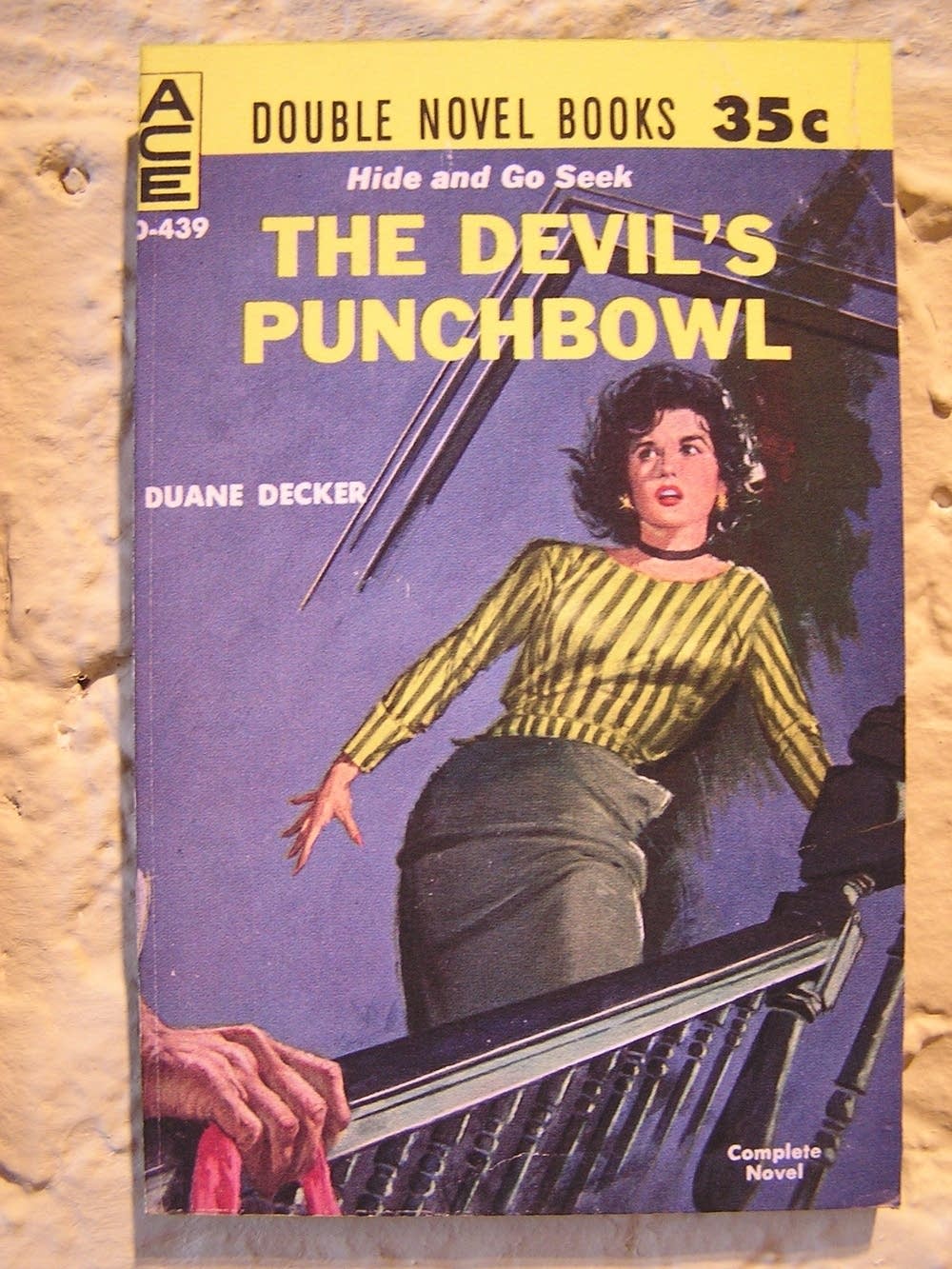 This facsimile of "The Devil's Punchbowl" cover is one of many from the Hess Collection at the University of Minnesota. The original books, popular in the 1930s, '40s and '50s, are yellowed and brittle because of the poor paper quality. (MPR Photo/Marianne Combs)

"They're a lot of fun," says Rathermel. "Stylistically you had to catch the potential reader's attention right away, so you have a lot of sex and violence and flesh and intrigue and glances and color going on."

Some of the titles include "Nothing but my Gun", "The Devil's Punchbowl" and "Rumble at the Housing Project."

Many of the pulp fiction cover artists didn't get credit for their work; they were under contract. Rathermel says that's a shame, because in addition to being fun and melodramatic, the covers sometimes make a social statement reflecting current attitudes.

"I'm thinking in terms of this 'Weird Tales' cover over here," says Rathermel. "It dates from 1933, and the bigger picture is this robot that's attacking people. But in a little square box it says 'I killed Hitler.' You don't necessarily think about there being these more serious undertones to some of these works of fanciful fiction."

The Walker Art Center has contributed several items from its collection to this show, including a book of poetry by Andre Breton with cover art by his friend Marcel Duchamp. Over the years that Rosemary Furtak has been the Walker librarian, she's developed a collection of her own at home. 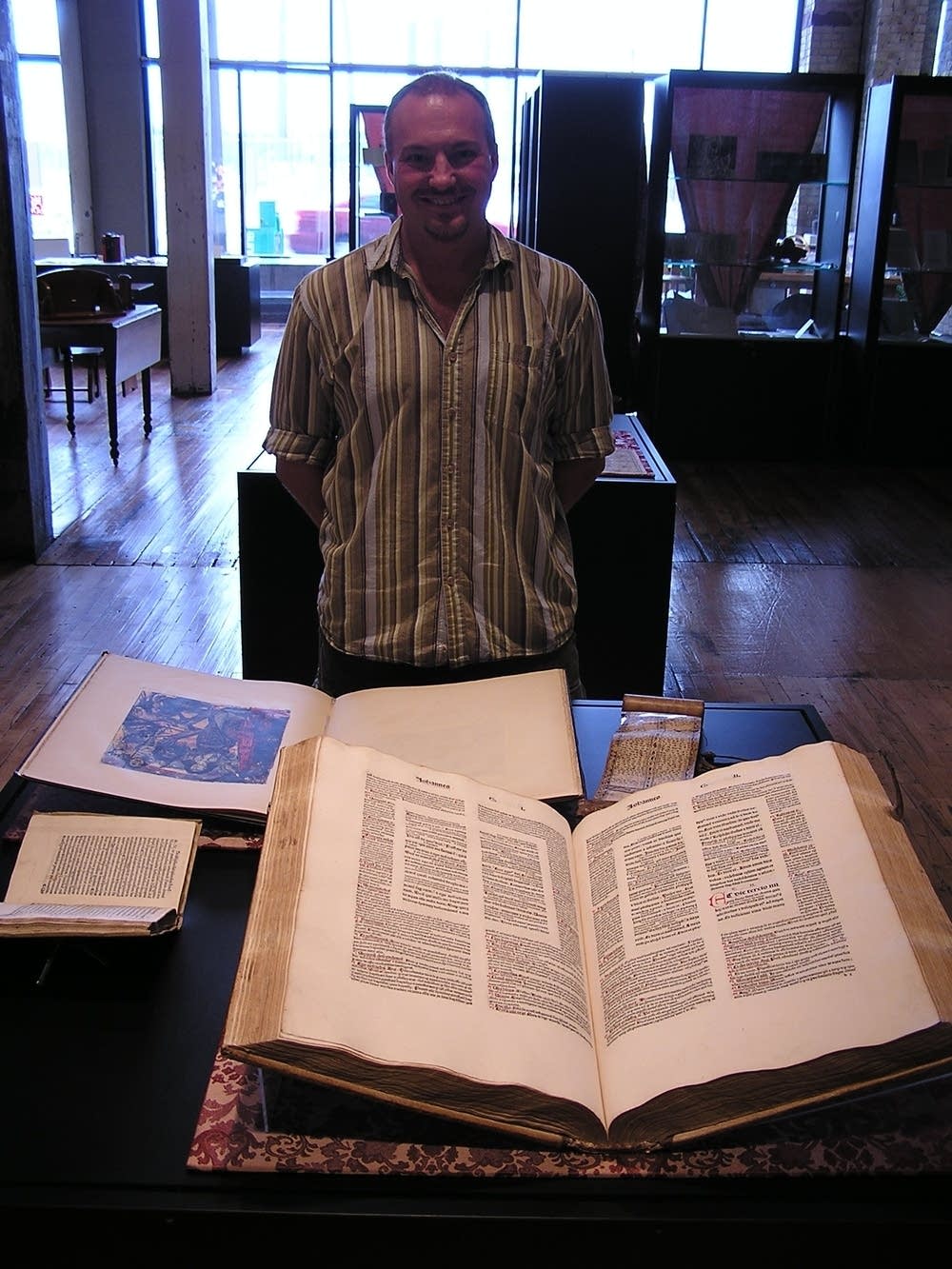 Bible with Glossa Ordinaria, 1480 From the Hill Museum and Manuscript Library. This is volume four of a four-volume set of the Bible in Latin with commentaries. The original text is in the center of the page, while commentaries by two different persons are written around it. (MPR Photo/Marianne Combs)

"We're all packrats to a degree and some people just gravitate toward books," says Furtak. "I think in my case it just sort of happened. I really didn't set out to collect books, but all of a sudden you find yourself surrounded by them. I don't give them special treatment. I don't wear white gloves and I don't make boxes for them."

Furtak says instead she channels her passion for collecting into her work, and many a time she's found herself salivating over a possible acquisition.

"Oh yes yes yes!" exclaims Furtak. "When I see something on a dealer's list like Dieter Roth's literature sausage--the work he made when he ground up the complete works of Goethe and then added some lard and spices and put them in sausage casings--I'd love to have that! And I did see one for sale once, but I had to restrain myself. It would have been my whole budget, you know."

The sausage is not in the exhibit, but some of the highlights of Furtak's avid collecting, and those of many others, are on display at the Minnesota Center for Book Arts through September 9.