As you walk into the exhibit, the first image you'll see is of a woman in colonial dress. It's a silhouette made of black construction paper that's been waxed to the wall. The woman appears to be leaping into the air, her heels kicking together, and her arms raised high in ecstatic joy. But on closer inspection you see that one hand holds a long razor, and what you thought were decorative details is actually blood spurting from her wrists. The piece is called "Cut." 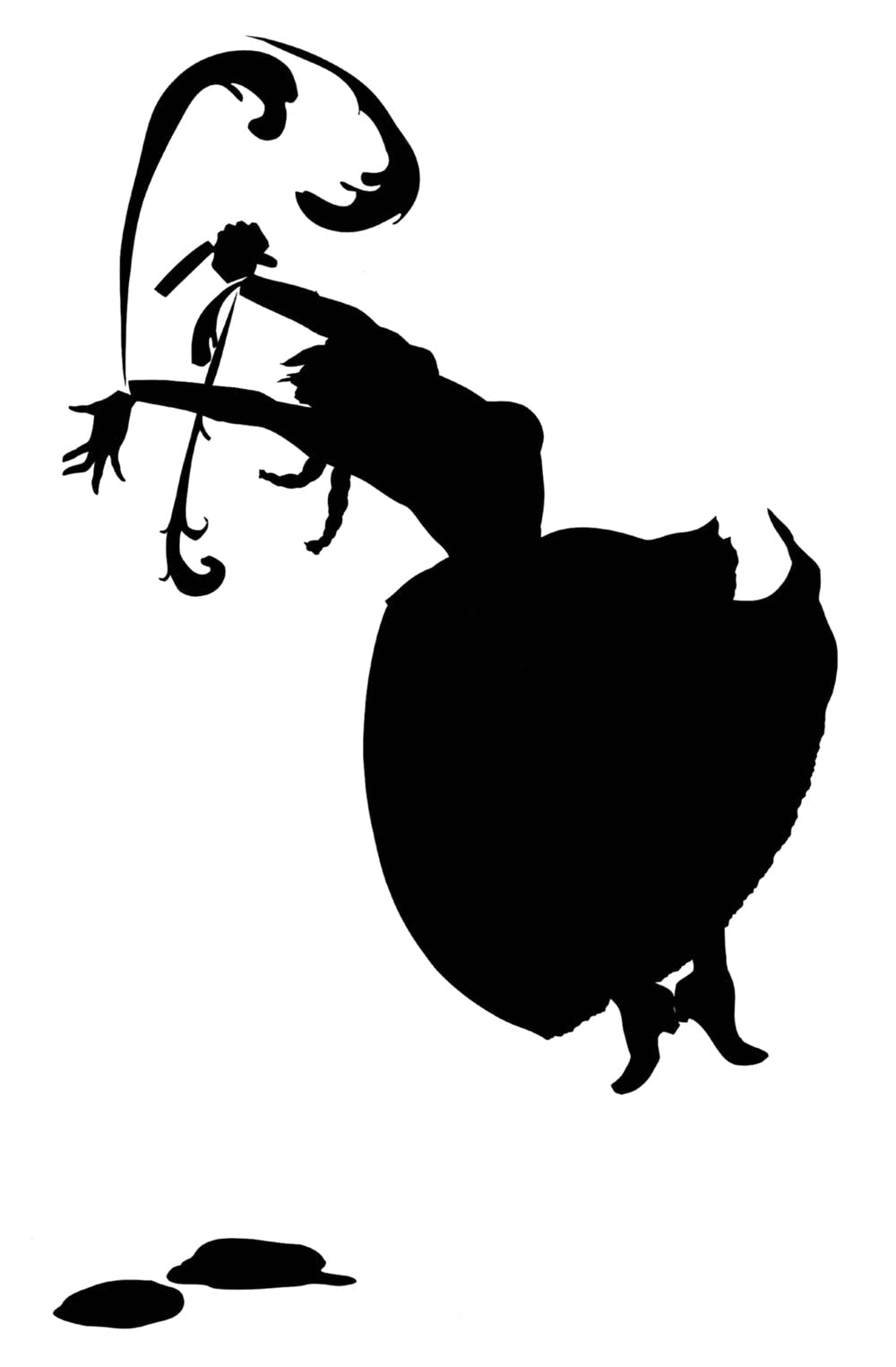 Kara Walker uses whimsical angles and decorative details to keep people looking at what are often disturbing images of sexual subjugation, violence and, in this case, suicide. (Image courtesy of Kara Walker)

Walker says her goal with all her work is to elicit an uncomfortable and emotional reaction. "I've seen audiences glaze over when they're confronted with racism," she says. "There's nothing more damning and demeaning to having any kind of ideology than people just walking the walk and nodding and saying what they're supposed to say and nobody feels anything"

Walker sits in a small dark room of the Walker Art Center. On a screen, one of her short films is playing over and over. In it, a young black woman in the antebellum South is given control of the whip, and she takes out her own sexual revenge on white men. The characters are shadow puppets. You can see Walker in the background manipulating them with sticks and wires. It's a bitter story in which no one wins. 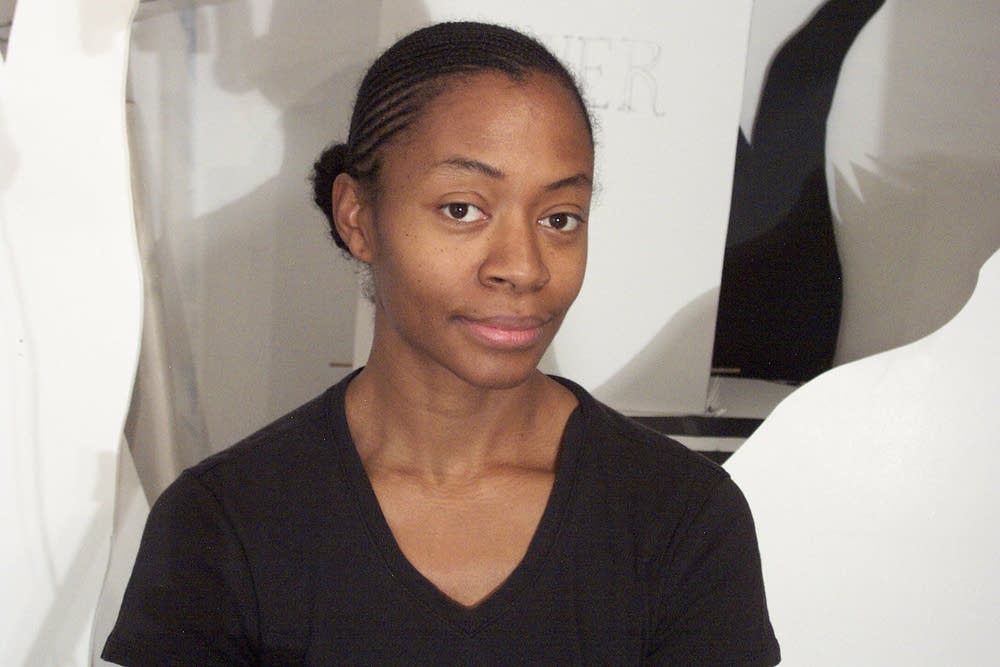 Artist Kara Walker explores the color line in her body of work at the Walker Art Center. The exhibit is titled "My Complement, My Enemy, My Oppressor, My Love." Her silhouettes examine racial stereotypes and sexual subjugation both in the past and present. (Image courtesy of Walker Art Center)

It's born out of her own anger. "One thing that makes me angry," Walker says, "is the prevalence of so many brown bodies around the world being destroyed. That makes me furious. And the other thing that makes me angry is that Tommy Hilfiger was at the Martin Luther King memorial." With this admission, she lets go a laugh and proceeds to explain: "Of the two, one sits inside my heart and percolates and the other is a newspaper item on my wall to remind me of absurdity."

Walker works predominantly with cut-out paper figures. With silhouettes she is literally exploring the color line, the boundaries between black and white, and their interdependence. Her images are drawn from stereotypes of slaves and masters, colonists and the colonized, as well as from romance novels. She plays idealized images of white women off of what she calls pickaninny images of young black women with big lips and short little braids. 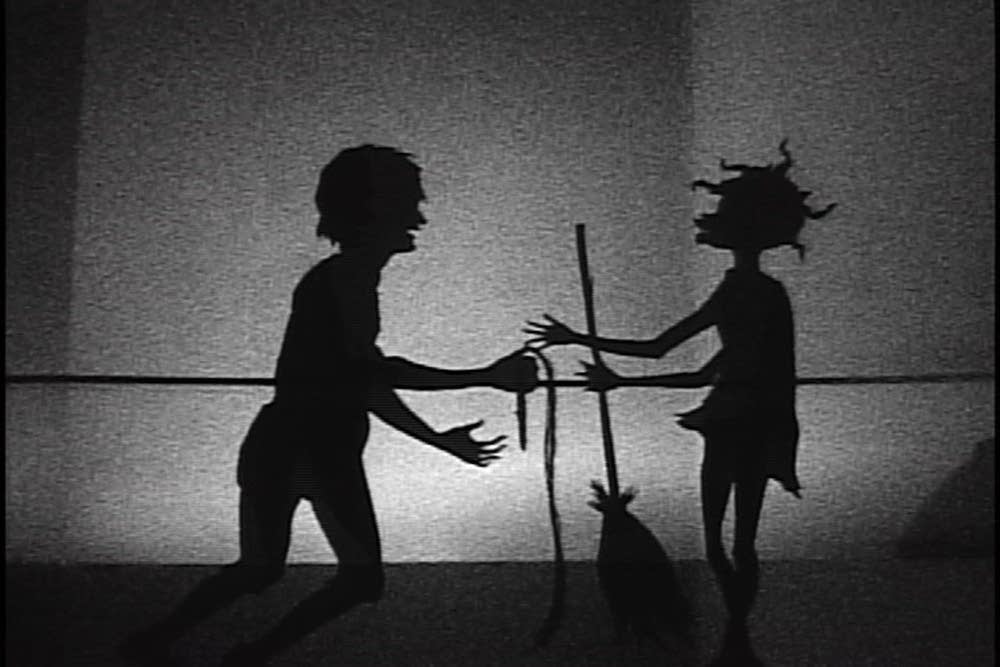 Kara Walker uses her silhouettes to create short films, often revealing herself in the background as the black woman controlling all the action. This film is titled "Testimony: Narrative of a Negress Burdened by Good Intentions." (Image courtesy of Kara Walker)

Thelma Golden, curator of the Studio Museum in Harlem, says Walker gets at the heart of issues of race and gender in contemporary life by putting them into stark black-and-white terms that allow them to be seen and thought about. "I am always intrigued by the way in which Kara stands sort of on an edge and looks back and looks forward and, standing in that place, is able to simultaneously make this work, which is at once complex, sometimes often horribly ugly in its content, but also stunningly beautiful," Golden says.

Golden says the visceral nature of Walker's work has put her at the center of an ongoing controversy. She says many people take issue with Walker's images, and many of those people are black. They worry that the general public will not understand the irony. Or just not understand.

On a Saturday afternoon, Christine Rumpf sits on a staircase in the middle of the exhibit, waiting for her friends. And she looks a little bewildered. "Her storyline is not one that I can relate to, Rumpf says. "It seems to me that she has issues that she's dealing with." 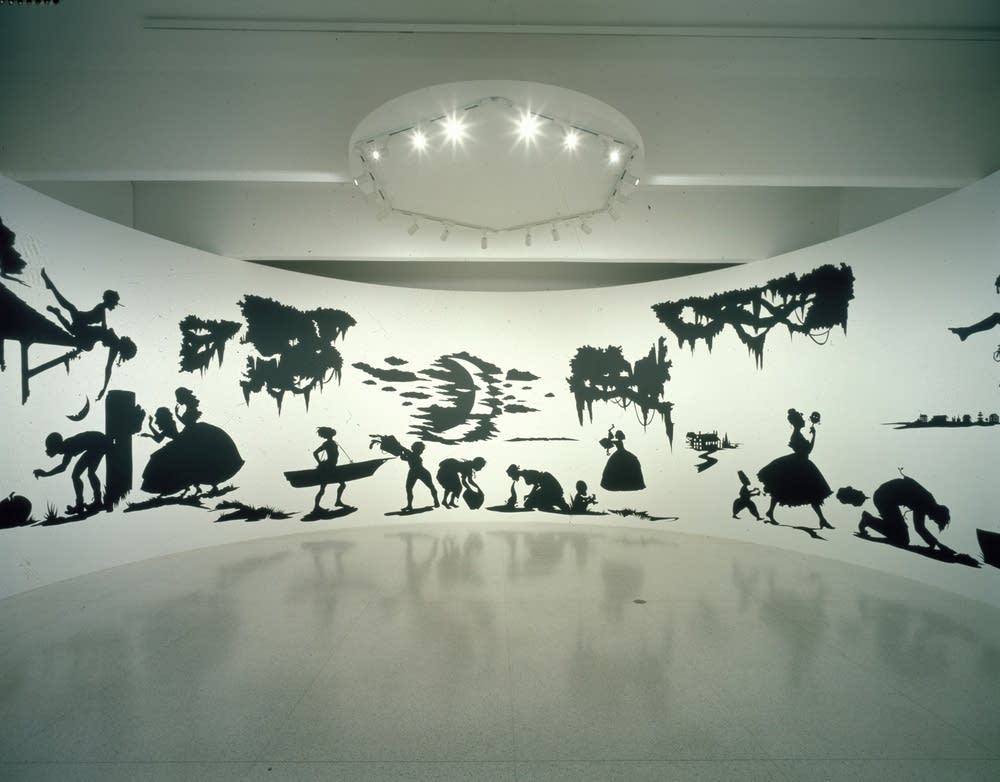 This 85-foot long mural has an almost equally long title: "Slavery! Slavery! Presenting a GRAND and LIFELIKE Panoramic Journey into Picturesque Southern Slavery or 'Life at 'Ol' Virginny's Hole' (sketches from plantation life)" See the Peculiar Institution as never before! All cut from black paper by the able hand of Kara Elizabeth Walker, an Emancipated Negress and leader in her Cause" 1997 (Image Courtesy of Kara Walker)

At least Rumpf has the nerve to voice her opinion. Many people looking at the work decline to comment, seemingly fearful of saying the wrong thing about such a racially and sexually charged body of work. One man admits he doesn't want to be "the white male" in the Kara Walker story.

But museum-goer Viki Radden says talking about Kara Walker's work is the whole point. While her artwork may seem like a surreal depiction of life in the antebellum South, Radden says it's dealing with a very real and contemporary subject. "This really is not a caricature," she asserts. "There is nothing in this exhibit, quite frankly, that is exaggerated. That is what slavery was about and people need to see that. They need to understand it, they need to understand the impact of it. I don't need to go very far back in my history--my great grandmother was a slave--so this is not something that we're talking about that happened that long ago."

"Kara Walker: My Complement, My Enemy, My Oppressor, My Love" runs through May 13 at the Walker Art Center in Minneapolis. But do not expect its run to be followed by a wave of understanding, reconciliation and healing. Instead, Kara Walker hopes the exhibit leaves people unsettled and questioning.