Manna Fest, if you didn't catch it, is a play on words. To make something manifest is to make it real. But in this case it's spelled Manna Fest -- as in Manna from Heaven, according to Dean J. Seal, the festival's artistic director. 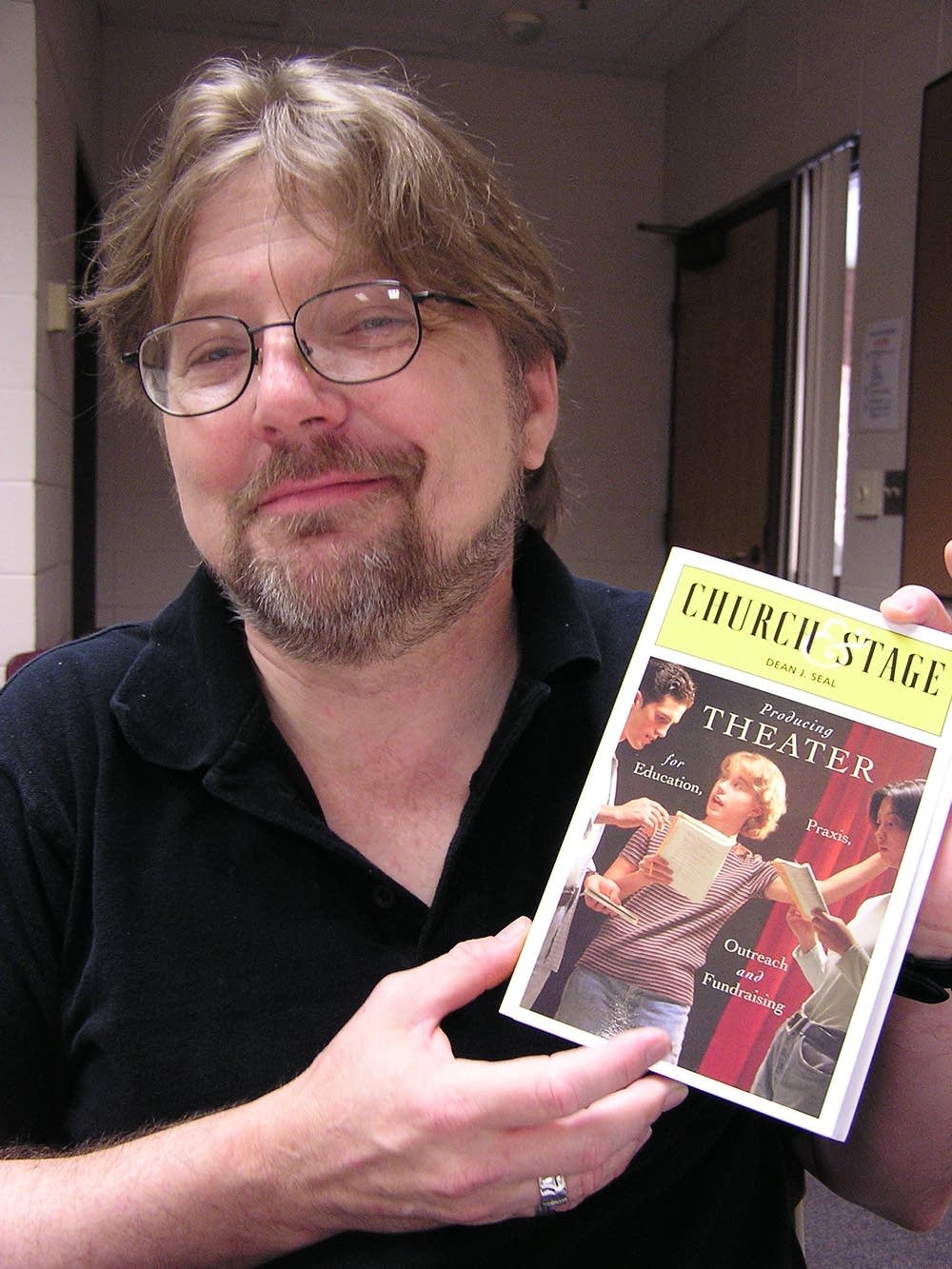 Dean J. Seal is a former director of the Minnesota Fringe Festival, an adjunt isntructor of religion at Augsburg College, and the author of the book "Church and Stage," a guide to producing theater in the church as a tool for education and praxis. (MPR Photo/Marianne Combs) 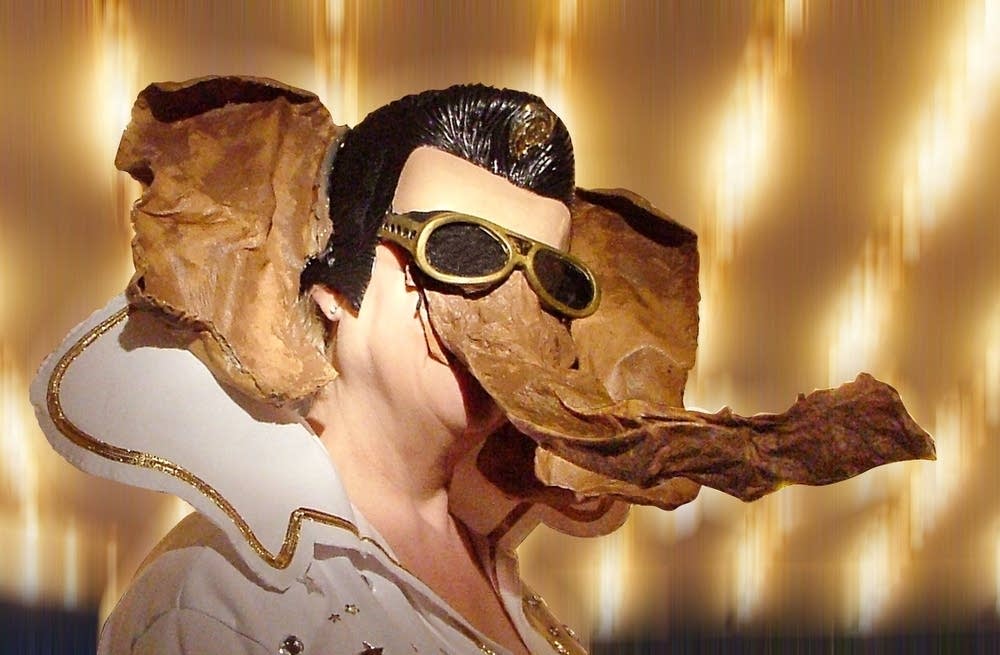 Actress Laura Littleford tells the story of GanElvis, weaving together the stories of Elvis Presley, and Ganesha, the Hindu god of new beginnings - who takes the form of an elephant. (Image Courtesy of Augsburg College)

That's certainly the case in the play "Jesus at Guantanamo," performed by Matthew Vaky. In it, Jesus is rounded up as a suspicious looking Middle Easterner and submitted to harsh interrogations. He talks to the prison guards - in this case, the audience, about everything from Mary Magdalene to waterboarding.

Here's an excerpt: "They cover your eyes and they pour water on your face and you can't breathe and you pray to me to help you. 'God, help me, I'm drowning!' But you aren't drowning. See, if they were really drowning you that would be torture, and they'd have to stop. But waterboarding isn't real torture - it just feels like it." 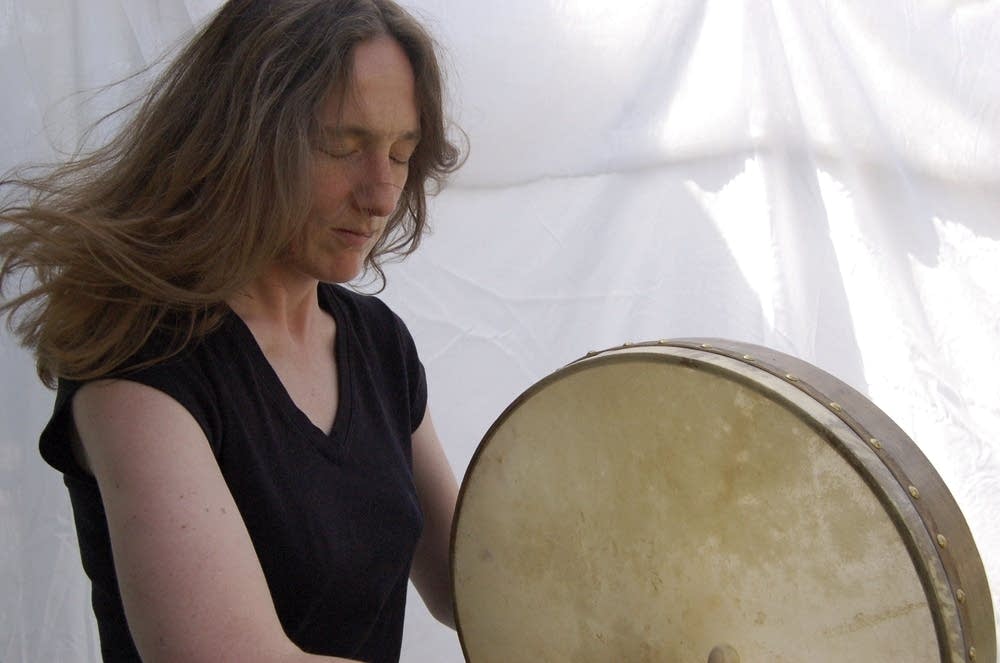 Elizabeth O'Sullivan uses a Quaker circle to explore and deal with a murder she witnessed as part of "Manna Fest," a spiritually minded theater festival at Augsburg College. (Image courtesy of Augsburg College)

"And that is an example to me of where this spiritual theater can actually modernize and communicate what is deeply true about these traditions," says Seal. "It's taking something from 2000 years ago and making it current and relevant and part of the life we live now."

While Jesus at Guantanamo might seem like pretty heavy fare, Manna Fest also includes shows such as 'Martin Luther - the Musical!' and 'GanElvis,' a show that weaves together the life of Elvis Presley with Ganesha, the Hindu god of new beginnings. Others boast titles such as "I'm ready to talk about my narcissism," and "Potato chip head." 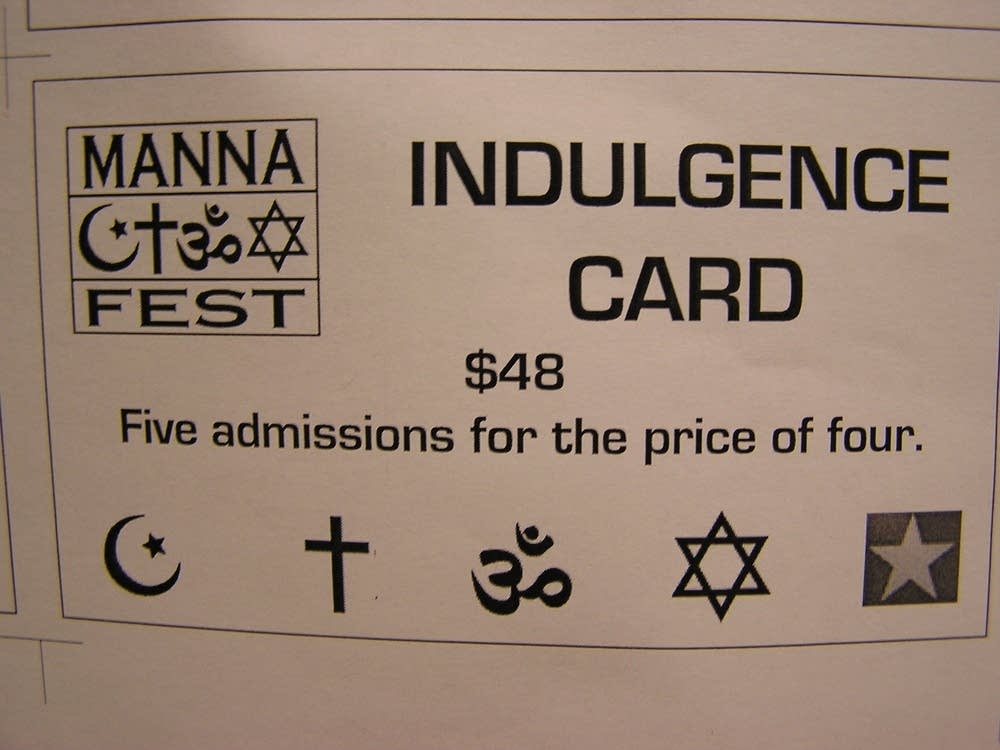 As part of Manna Fest at Augsburg College, theater goers can "buy an indulgence" card, allowing them to see a fifth show for free. (MPR Photo/Marianne Combs)

The program for Manna Fest is subtitled "Where the sacred and the imagination meet in profound conversation." Seal says that's a conversation that is desperately needed.

"There are religious denominations who are breaking in half over homosexual ministry, Sunni's and Shia's are killing each other and we're killing all of them," says Seal. "There's a great need for religious communities to learn how to talk to each other, and I think that starts by listening."

Manna Fest runs through Aug. 12 on the campus of Augsburg College in Minneapolis. Most of the shows will take place in the Foss-Miles-Lobeck Center, which holds both a chapel and a theater, side by side.