Ernest A. Bryant III enjoys exploring the tension created by placing things from different worlds side by side. He was inspired by his experiences in art school, where no mention was made of the art he grew up with. He cites as an example, graffiti, which he calls aerosol art or tag art.

"Going through an institution, there's definitely a heirarchy between the different media and the way that it's taught," he says. "Certain media weren't covered and certain continents weren't covered; it was a particular canon they were trying to push." 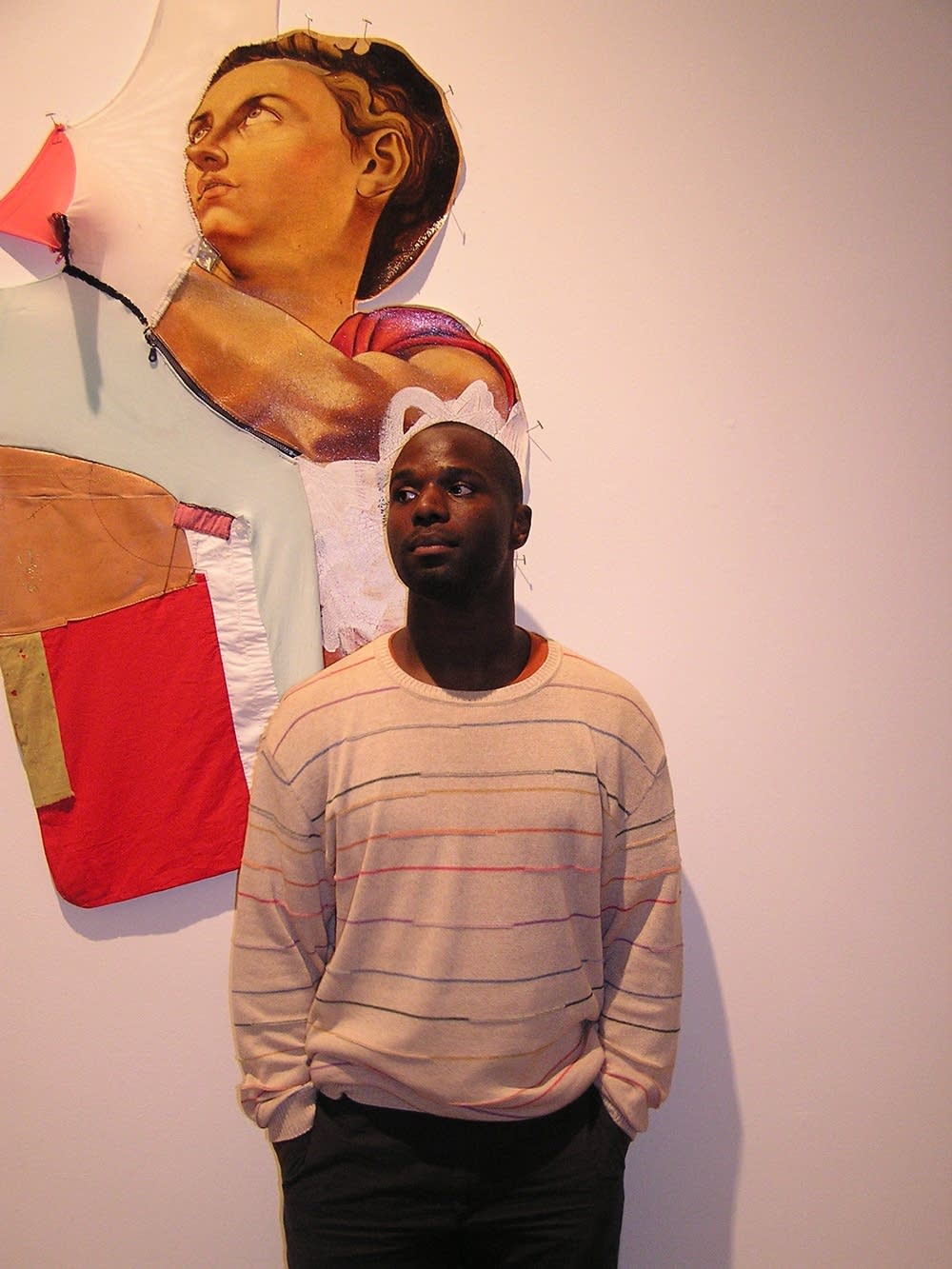 Artist Ernest Bryant stitches together items of clothing with pieces of his own paintings to create a merging of high art and craft art. (MPR Photo/Marianne Combs)

Bryant didn't feel he could just discard the art of his youth as he immersed himself in school. So he decided to incorporate street culture into what he was learning. He created works that juxtaposed high-brow painting with aerosol art.

Another project involved photographs of him shaving zig-zag patterns into young white guys' hair. And now he's exhibiting his first-ever solo show at Franklin Art Works in Minneapolis. The show, titled "Trick Baby," is a series of pieces that combine painting with clothing.

The face of Mona Lisa is stitched into fragments of shirts and jackets. A piece of Michelangelo's Madonna Tando is surrounded by thin bits of luminous white and pink fabric.

"Something like this Madonna Tando painting, we wouldn't be able to get too close to it because the alarm would go off," he says. "There are things that we prop up and really appreciate. But we can't touch it. And then there's this clothing that I wanted to place next to it to give us a sort of entryway to touching this really high thing and also subverting the power of both of those."

"It's very electric to see something that you've never really witnessed before," says gallery curator Tim Peterson. "It's also the manner of Ernest's painting that intrigued me and the way that he's brought it into balance with essentially fragments of clothing and material. It's hard to imagine that balance, but it's really striking to see this idea of history and the contemporary thrown together." 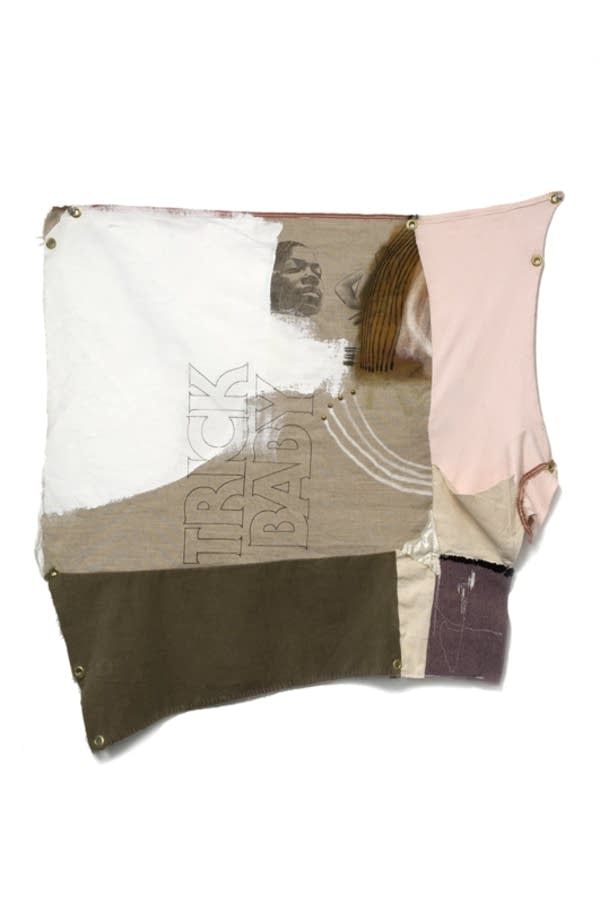 Artist Ernest Bryant decided rather than abandoning the street culture with which he grew up, to incorporate it into the art he created. (Photo credti: Rik Sferra)

Bryant has only been out of art school for a couple of years. But already he's won two fellowships from the Jerome and Bush Foundations.

Patricia Briggs, associate professor of art at the Minneapolis College of Art and Design, has been following Bryant's work since he was a student there. She says Bryant, by sewing his works together, is also playing with notions of what's feminine and what's masculine.

"This idea of the stitch is associated with women's art and domesticity," she says. "This isn't about domesticity and women, this is about clothing as a kind of armor. These are the associations I got because I knew the artist was not just a guy but an African-American guy. And I thought, 'Wow, sewing in his hands has all these different associations.'" 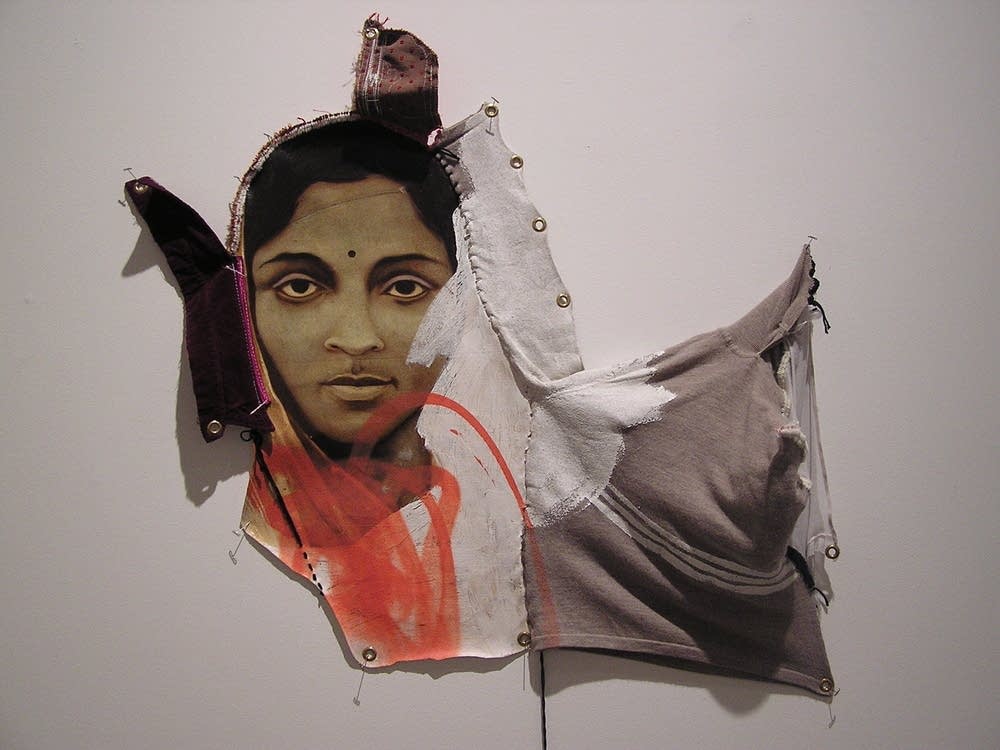 Artist Ernest Bryant incorporates pieces of clothing with fragments of his own paintings which he's cut into pieces. (MPR Photo/Marianne Combs)

There is one object in the exhibition that is unlike all the rest. It's a small wooden sculpture, with a small TV screen embedded in its belly. Bryant says it's based on a Congolese animist object endowed with certain powers and used to resolve conflicts. As viewers approach the statue, they can see themselves on the TV screen, looking back.

"What I wanted to do was to think about where I encounter these objects today, in an institution, behind glass, in North America. It's totally out of context," he says. "By placing it in here, I can have people observe the object and at the same time observe themselves objectifying this African object."

Trick Baby runs through November 3 at Franklin Art Works in Minneapolis. Bryant is already hard at work with his next cross-cultural interactive work of art, this time using chicken bones harvested at community BBQs to create a flack jacket.