It's hard enough to learn to compose music, but imagine having to write a score for a silent film. That's exactly what a group of young composers is doing this week at the University of Minnesota.

It's noisy in the crowded band rehearsal room at the university, but over in one corner, Randall Davidson is focused on a laptop. He's mesmerized by a video of a Ukrainian sand artist.

"They have a light table with this sand sprinkled very thinly over it," he says. "And then this woman is telling this story of World War II and the impact it had on the people of the Soviet Union."

This is just one of the videos available for scoring by participants in the Junior Composers Institute. Davidson, the institute's general director, says the challenge is it's to be played live by a small ensemble. There are a lot of choices -- everything from Charlie Chaplin classics to rock videos.

"There's a group called Massive Attack," says Davidson. "And one of our students has written original music which has nothing to do with Massive Attack at all."

Davidson says Junior Composers is about tapping into a musical vein often missed in schools.

"Young people have a lot of imagination, and they are frequently run through a musical education system which is about performance, and this is about creation," Davidson says.

There are 40 junior composers here from all over the country. They are working very hard toward the final concerts on Saturday morning and afternoon. They take music theory classes, listen to guest speakers and work on their pieces. 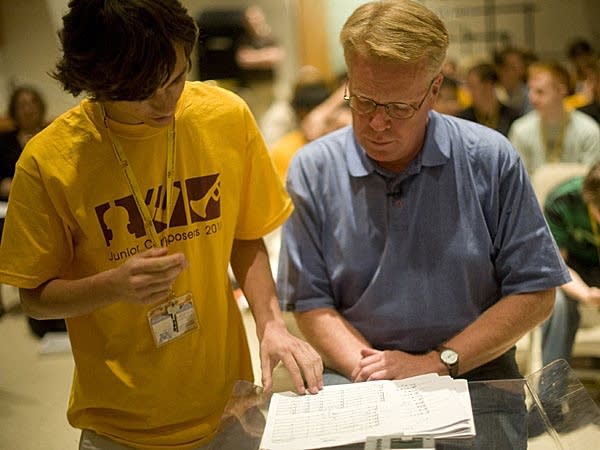 The crowd grows quiet as the ensemble -- all top-flight, professional musicians -- prepares to give Brian Heim's score its first reading.

Sitting in the front row, Heim, from Caledonia, Minn., wears an expression of nervous delight. He chose the sand painting video because of its clear storyline, and because he's interested in World War II.

"I decided to go with the opening being the Russian, the Soviet Union's national anthem, and have that sort of harmonized at the beginning," he said. "It's sort of a pastoral melody I think."

"It would be a little bit faster," Heim says.

"This part," Heim says as he points to the score so Franklin can make a note. 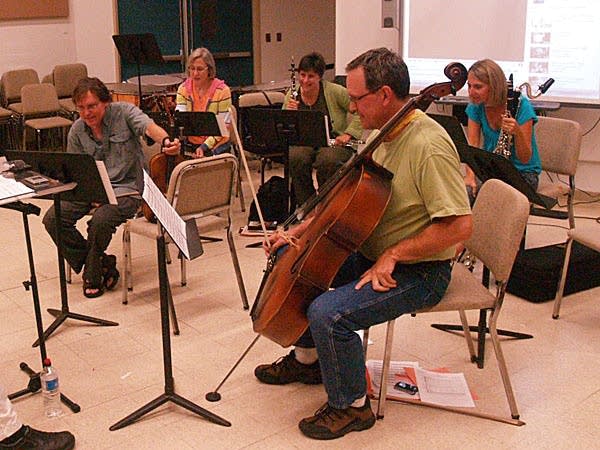 
Timing is the big complication about writing a live film score. The music has to match the action on screen.

But there also have to be opportunities for the musicians to either slow down or catch up. Heim did this with strategically placed silences and held notes.

"And for another one, I had a bass drum roll which led into this cacophony," Heim laughed.

After running through the score once, the film appears on a large screen behind the musicians. As Franklin keeps one eye on the screen and the other on the score, the ensemble plays the entire piece. The audience of young composers sits transfixed.

The film finishes and the audience applauds. Brian Heim is very happy.

"It was spectacular!" he says.

Heim says he's really enjoyed working with the other junior composers and the diversity of ideas they brought to the work.

"I've definitely learned a lot of new things about what you can do with different thematic ideas," he says. "And how you can take an idea and transform it in completely different ways I have never thought of before. So it's sort of a forum of ideas and how to transform them."

Across the room, Cody Bursch and Ethan Hecklesberg are writing up their program notes for the final concert. Even for established composers, it's rare to hear an ensemble play something they have written. Bursch is relishing the opportunity.

"Because even if it sounds terrible, it's still really cool that all this group of people is here to play your music," he says.

Junior Composers Director Randall Davidson says there's a larger mission here. This year's institute includes a reunion for past participants. Davidson wants to track where the junior composers end up in their lives.

"Our anxiety is that too few will go into music because there is not enough money in it," he says. "And we are hopeful that some will, because I think we can change American music culture by shaping the expectations and aspirations of young people."

There is clearly a demand. Davidson is running a new monthly Junior Composers Institute in the fall and winter.

It can only take 16 participants, yet even without publicity, already a quarter of the slots are filled.