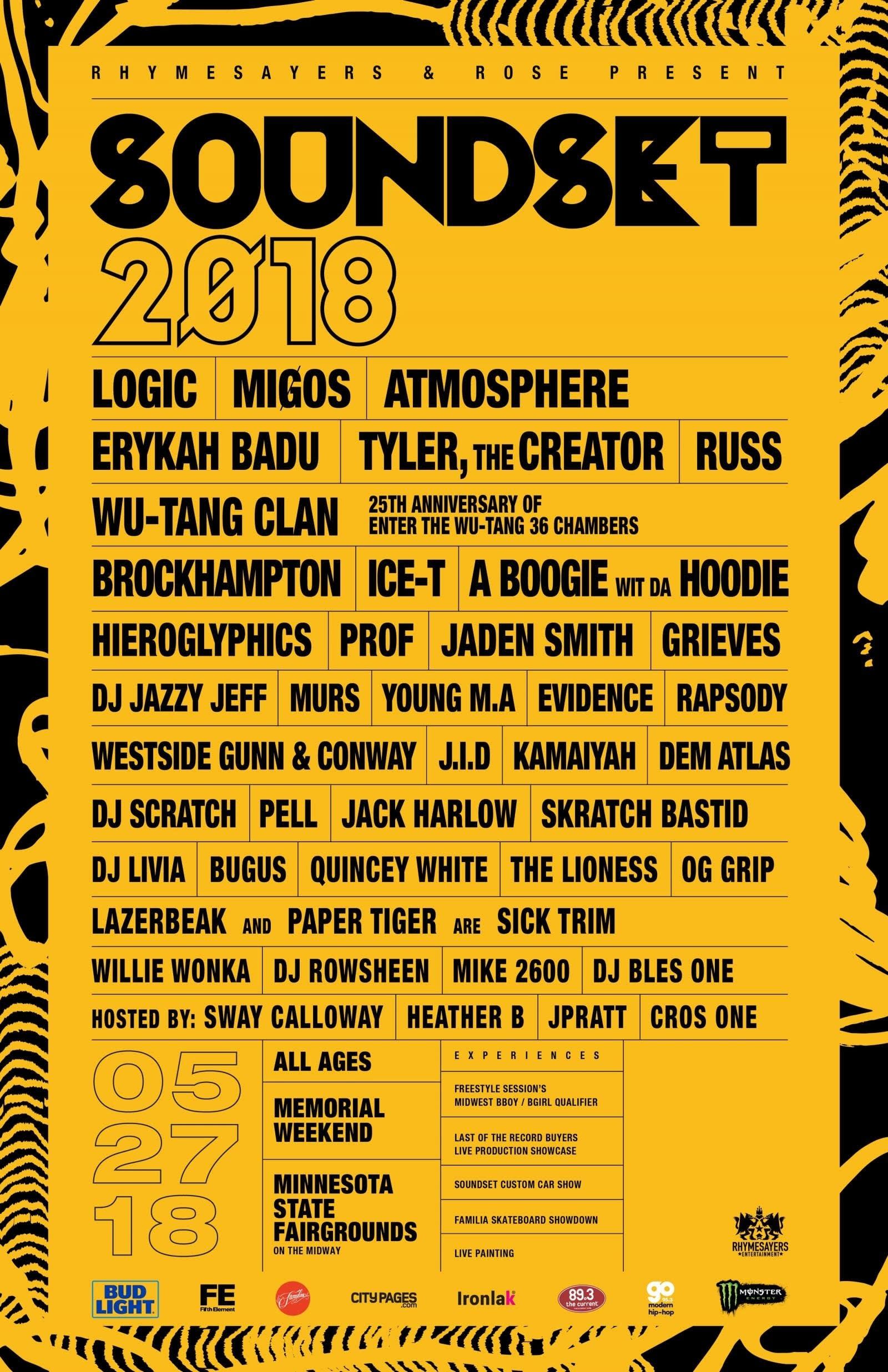 Once again, Atmosphere is primed to deliver an unforgettable hometown set following up their critically acclaimed, Fishing Blues. Red hot from the runaway success of his GRAMMY® Award-nominated quadruple-platinum smash “1-800-273-8255” and third opus Everybody, Logic joins the bill among the headliners, promising nothing short of a show-stopping gig. Three of the hottest names in the game, the multiplatinum triumvirate Migos stand poised to bring the house down after crushing the Billboard Top 200 at #1 with Culture II earlier this year. It’s the first time they’re here!

Legendary R&B and soul sorceress Erykah Badu graces the stage with what promises to be pure magic as Odd Future founder and gold force of nature Tyler, The Creator gets ready to ignite the mosh pits. Supporting his full-length debut There’s Really A Wolf, Virginia’s own Russ takes over with his own fire and flash.

A group that needs no introduction, Wu-Tang Clan will unite to celebrate one of the most influential, impactful, and important rap albums of all-time as Enter The Wu-Tang: 36 Chambers turns 25 this year, Multiplatinum New York disruptor A Boogie Wit Da Hoodie brings new East Coast energy, while Ice T reps the West Coast O.G.’s like only he can. Musical collective Brockhampton turn up with their wave-making sound as rising pop icon Jaden Smith fuels the party with style and substance. Minnesota’s own Prof will be on hand to rep his hometown, introducing the audience to his new album Pookie Baby due out on April 13.

Touting new music from his latest Rhymesayers epic Weather or Not, Dilated Peoples’ Evidence makes his way back to the hallowed Soundset stage. Pell drops in with some New Orleans style, and XXL Freshman Cover star Kamaiyah flaunts Bay Area bravado with a hint of massive melody. Just a month after releasing A Journey Into the Unimaginable, L.A.’s own Murs unlocks a live trip of his own for fans. Making his first appearance at Soundset, the legendary DJ Jazzy Jeff brings decades of skill to the lineup. Rhymesayers own and another vet Grieves returns to Soundset performing his new album, Running Wild. Rapsody is back for a second go-round, as is Hieroglyphics. Dreamville’s own J.I.D. ignites the stage with tracks from his debut The Never Story. Minnesota native Lazerbeak also teams with Paper Tiger for their first ever live performance as Sick Trim.

Reprising his role as main stage master of ceremonies for the sixth time, radio and television personality Sway Calloway of SiriusXM Shade 45 returns to the fest. Heather B of SiriusXM, JPRATT and CROS One are also on hand again to host the other stages.

Always going beyond the music, the Essential Elements tent houses the 5th annual Freestyle Session Minnesota B-Boy/B-Girl competition. The Skateboard Showdown presented by Familia offers an extreme angle for the eighth year. Fans get to experience the Soundset Custom Car Show and the Last of the Record Buyers production showcase for the tenth time. Plus, the second live painting exhibition.

That’s not even half of it though. You’ll have to get a ticket for the full effect.