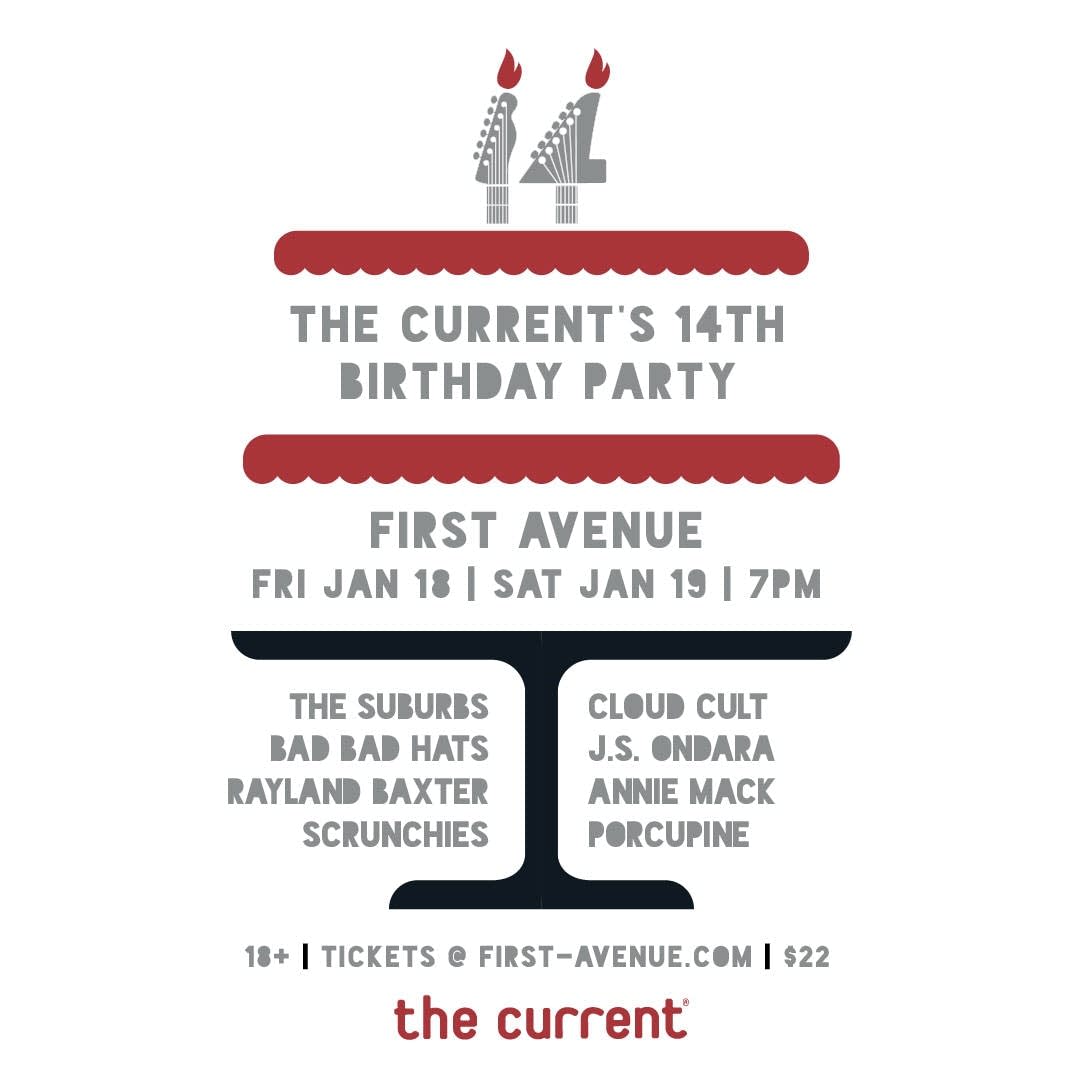 
The Current will celebrate 14 years on the radio with two nights of live performances at First Avenue in January. The back-to-back birthday events will feature eight acts over the course of two concerts on Friday, January 18, and Saturday, January 19. Thank you to everyone who purchased tickets. Both nights are sold out.

The Current's 14th Birthday Parties are sponsored by Minnesota United.

The Suburbs, Bad Bad Hats, Rayland Baxter, and Scrunchies light the candles on night one of the Current’s 14th Birthday Party

Often described as "a Midwest Roxy Music" but with more humor and rock scruff, The Suburbs have been making their unique punk-pop-art-dance records and performing off and on ever since the Minneapolis Sound heyday. Founded in 1977, The Suburbs are recognized worldwide as among the original heroes of the historic music era in Minneapolis that saw the emergence of other bands like The Suicide Commandos, Prince, The Replacements and Hüsker Dü. Still going strong, the Suburbs' most recent album is 2017's Hey Muse!.

An indie-rock band from Minneapolis, Bad Bad Hats are Kerry Alexander, Chris Hoge and Connor Davison. Named for a trouble-making character from the Madeline children’s books, Bad Bad Hats' music honors classic pop songwriting, with nods to '90s rock simplicity and pop-punk frivolity while Alexander’s unflinchingly sincere lyrics cut to the emotional heart of things. The band's 2015 debut album Psychic Reader caught the attention of outlets across the country, including The New Yorker, NPR, Pitchfork, and Paste. Lightning Round, Bad Bad Hats' second full-length album, finds the band more confident and mature than ever. They've been touring heavily in support of the new album, but will be making at stop at First Avenue to help The Current celebrate 14 years on the air.

Nashville singer/songwriter Rayland Baxter creates evocative melodies sung in a voice that reflects the mysteries of life that are the bread and butter of his songs. Baxter first rose to national attention when his 2012 debut, Feathers & FishHooks, was reissued by ATO Records, kicking off a subsequent string of critically acclaimed releases for the label. Baxter's most recent album, Wide Awake, was released in July 2018. The album's lead single, "Casanova," quickly became one of the standout songs of the summer.

Scrunchies are a supergroup drawing members from some of the hardest-rocking bands to come out of Minneapolis in the past four years: Laura Larson of Kitten Forever fronts Scrunchies, with Bree Meyer of Double Grave playing bass, Danielle Cusack of Bruise Violet on drums, and Cusack’s Tony Peachka bandmate Stephanie Jo Murck on lead guitar. The band's first full-length album, Stunner, released on June 1, 2018.

Cloud Cult have been making music for more than 20 years, and have remained staunchly independent throughout. Begun as a studio project by founding member Craig Minowa, Cloud Cult have found success on their own terms and earned critical praise over the years, most recently for their latest studio album and its accompanying feature-length film, The Seeker, which stars Josh Radnor and Alex McKenna. Over the course of 11 studio albums and various additional projects, the Cloud Cult's output continues to pursue the "big picture" issues of live, sharing an uplifting message and a continual celebration of life and love and catharsis through music. Longtime fans of The Current may remember Cloud Cult headlining The Current's 8th Birthday Party; we're excited they're returning to help celebrate number 14.

J.S. Ondara grew up in Nairobi, Kenya, listening to American alt-rock and making up his own songs for as long as he can remember. After discovering the music of Bob Dylan, Ondara moved to Minneapolis in 2013 to pursue a career in music. There he began making his way in the local music scene — originally performing as Jay Smart — continually writing songs about what he saw, felt and experienced in a place far different from home. Ondara quickly captured the local imagination — and soon after gained national interest and signed to esteemed label, Verve Records, which will release his full-length album, Tales of America, on Feb. 15, 2019.

Annie Mack has built a reputation for writing meaningful, relate-able and inspirational songs. Live, she delivers her songs with power, soul and conviction. A dynamic vocalist and charismatic performer, she takes the audience on a journey; from velvet lined melodic depths to exciting, gritty, full bodied church hollers. Based in Minneapolis, Mack is a regional powerhouse who has gained national recognition at festivals and venues from North Carolina to Pennsylvania to Chicago, St. Louis and beyond.

Porcupine were founded in early 2006 by singer/guitarist Casey Virock. Hoping to springboard off the success of Virock's former band, Space Bike, Porcupine began touring and playing the Midwest. Virock, along with bandmates Greg Norton (bass) and Ian Prince (drums), derive some of their inspiration from '70s classic rock and '60s British psychedelia, resulting in a Swervedriver-meets-Queens-of-The-Stone-Age type sound. Over the past 10 years, Porcupine have continued to build momentum, releasing two full-length albums, two EPs, multiple singles, and songs featured on TV shows. Porcupine have just released their latest EP, What You've Heard Isn't Real in November.

To keep our birthday party environmentally friendly, we’re partnering with r.Cup and the Water Main, MPR’s initiative focused on preserving our freshwater resources. From live events each year, landfills pack on four billion plastic cupseach demanding two cups-worth of water to produce. You can help cut that waste by enjoying your choice of draft beer from a re-usable r.Cup sporting the Current and Water Main logos. Simply purchase a draft beer and then deposit $3 for your very own r.Cup. Your r.Cup may be refilled with additional draft beer purchases all night. You may choose to keep r.Cup to reuse at home again and again. Or, you may return your r.Cup to get your $3 back!