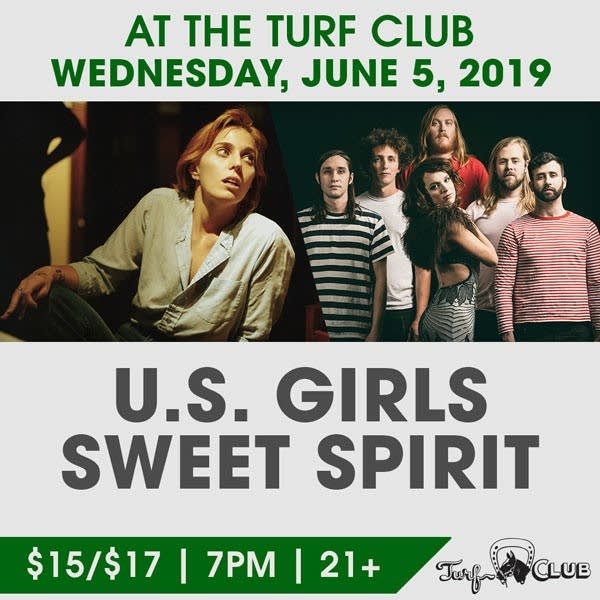 
This year marks a significant anniversary for U.S. Girls, the protean musical enterprise of multidisciplinary artist, Meg Remy. 10 years ago Remy first used a 4-track recorder and a microphone to self-produce a series of spontaneous, starkly musical, ‘instant expressions’. These collisions of static, clang and sung melody seem in retrospect like a uniquely American display of minimalism, an unmistakably feminine counterbalance to Nebraska or Rev & Vega’s early sonic confrontations.

In contrast, her latest work for 4AD, In A Poem Unlimited, Remy’s 6th album and 2nd LP for the label, was painstakingly crafted in multiple studios by a creative cast of 20+ collaborators. Remy traverses an immediate and increasingly politicized vision over the course of this decade of work. And while U.S. Girls, denoting the plural, is no longer a misnomer, In A Poem Unlimited may be Remy’s most individually distilled protest to date.

Opening with a dark, conga-infused drum break, lead-off track ‘Velvet For Sale’ establishes a moody, distinctly mysterious feel. If Half Free (Remy’s 2015 4AD offering) trafficked in dusty, sample-based textures, Poem represents an inversion of that instrumental formula; the non-sampled rhythms are themselves eminently sample-able. The newfound grooviness speaks to a central element of the new album’s collaborative spirit. All tracks save for two were performed by The Cosmic Range, an accomplished instrumental collective from Toronto, Remy’s adoptive hometown.

Assembled by Matthew Dunn in 2014, The Cosmic Range is composed of some of Canada’s most accomplished improvisers, and includes longtime U.S. Girls producer / foil Maximilian ‘Twig’ Turnbull. The Range-whose eclectic combination of improvised psych, jazz, and propulsive dance music was first recorded on their 2016 New Latitudes debut (Idée Fixe)–is put to work here on a song cycle that is typically diverse for a U.S. Girls album. Remy is not content merely to establish a new sonic palette on successive albums. Instead she approaches each song as its own encapsulation, with the effect that her oeuvre is essentially genre-agnostic.