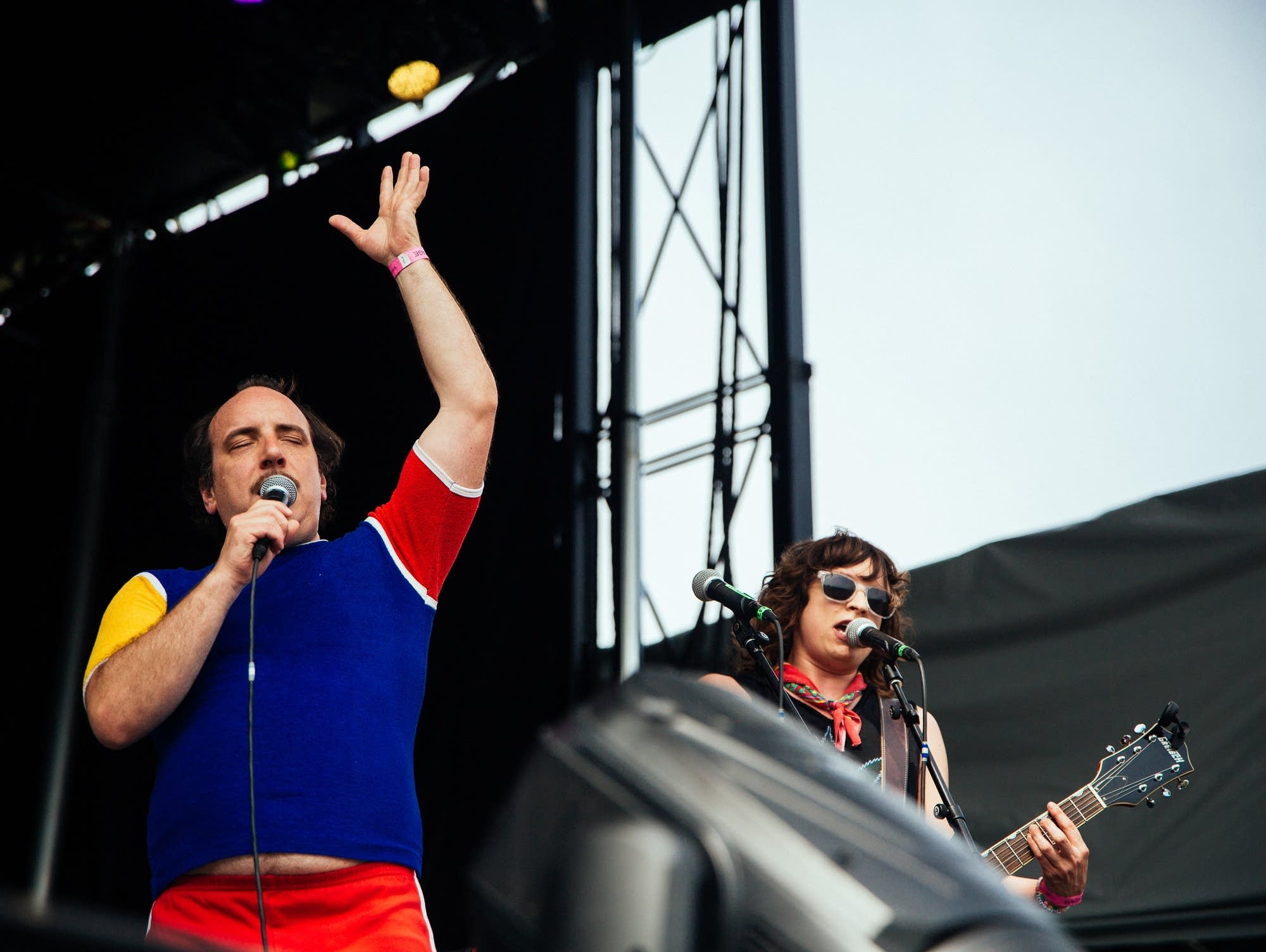 
Heart Bones is a rare thing—a new band with a long history—which heightens both expectations and standards. See, I think that when a new thing, a creative thing, clicks into place just right and does so immediately on a level that you just know and feel is true all at once, often it’s all the little ways it dares to be just a little bit off that actually makes it work. And striking this ideal ratio of The Familiar and The New is the specialist’s true skill. This is exactly how Heart Bones excels.

It’s not hard to imagine that they shouldn’t exist at all: Sabrina Ellis and Sean Tillmann are obviously both tirelessly bustling and juggling and geographically separated by the entire height of the middle of the country. But put on their debut album Hot Dish and as soon as Sabrina’s first line enters, completing the inversion of Sean’s first line which has just spun your head around, the collaboration feels inevitable. Inevitable like, “Damn, right. Heart Bones. Guarding the center of vulnerabilities. Why do we have things called chest cavities instead of heart bones?” The anatomical warping of their name makes more sense given how fragile our meaty bodies actually are.

Both in concept and approach, Sean and Sabrina share many commonalities: long histories of genre warping and adopting evolving personas to embody these progressions, celebrating wildness and theatricality night after night throughout grueling tour schedules. And all this expressed in the persistent tension of dark themes made melodious, a move that the true specialist knows will always make the struggle for balance feel deep and real.

In hindsight, Sean’s evolution seems so linear: his earliest band Calvin Krime dared to be fun in a subculture steeped in angst. And after it disbanded, he sanded down the angular edges and stepped more clearly into a front-man role in Sean Na Na. But it was only the emergence of his alter ego Har Mar Superstar—at first pretending to be his own brother—that gave him the cover to risk fully expressing himself freely.

The depths of his impulses came to play on the surface; the constant tensions of silliness and sincerity struck as immediate and true and deeply felt and always fun; stripping down to one’s skivvies isn’t only sexy, it’s sexy because of the openness and vulnerability it represents. Over the course of 20 years, it evolved from beats on a MiniDisc player to a seven-piece soul revue without the continuity of his character ever coming across as inconsistent, a testimony to the acumen of his voice and his knack for hooks.

And down in Austin, Sabrina was carving their own unique path and persona. They perfected their glam snarl for a decade with the anthemic and brassy A Giant Dog, their performances cocky, provocative, and raw. Then tempered and expanded that range by fronting the epic collective Sweet Spirit, who blend party-strut disco and earnest classic rock like if you could extract whatever is London out of Queen and replace it with Texas.

And after years of both participating as central figures in their own city’s thriving and collaborative music communities, they fused all these commonalities, their inclinations for sly raunch and camp facades as a means of revealing vulnerabilities. And voilà: Heart Bones. The name, evoking paradoxical icons of tough scariness and cuteness—the exact combo to which I’ve always attributed The Misfits’ success.

In the end, if you’ve steered your evolution with any modicum of self-awareness and decency, the coolest thing, the coolest way to be, can basically be summed up as fun and positive. And shockingly, compared to the common youngster’s notions of cool, this hard-won coolness actually has very little to do with brooding. The public demonstrations of brooding cool by adult rockers, with their insecure and clumsy demonstrations of interior depth, are nothing compared to the wisdom to overcome that simple impulse to brood. It’s too easy given adulthood’s many disappointments and regrets. Who cares? But summoning the spirit to give joy back to the world? That’s a noble mission.

And none of that is simple. Has the common word “Loneliness” ever been sung in such a soaring manner as the chorus of “Open Relations?” “Little Dancer” has everything I ask of the life-coach podcasts I depend on, but with a spoonful of skeptical humor. Beginning to end, the arrangements of Hot Dish reinforce this blending of shaded and contradictory moods by balancing different eras of pop music with intentionality and attention to detail that makes it all feel historically inevitable: something truly New, achieved by the skillful means of combining Familiar elements we all already love.