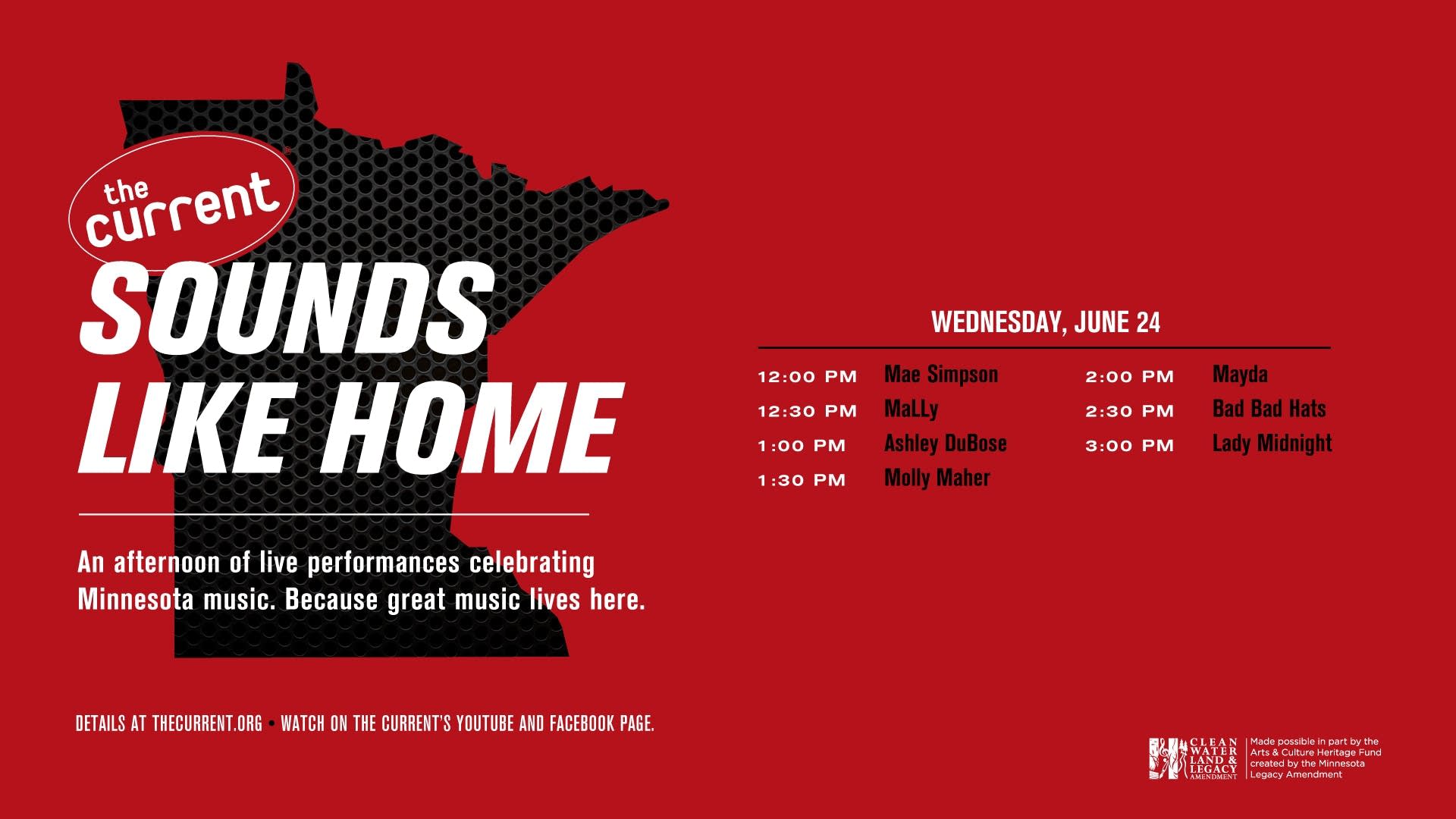 
On June 24, 2020, The Current is hosting another round of Sounds Like Home. It’s an afternoon of virtual performances celebrating Minnesota musicians. Join an incredible lineup of local musicians and Andrea Swensson from The Current as we meet up on the internet for a virtual festival. Great music lives here, and you can still enjoy it live on TheCurrent’s YouTube channel or Facebook page!

Mae Simpson is originally from South Carolina and is known for her powerful voice and captivating stage presence. Simpson leads a seven-piece band that blends funk and dance music with soul, blues, country, calypso, jazz, rock, and even a little hip hop.

MaLLy, the Minneapolis rapper aka Malik Watkins, is joining The Current for Sounds Like Home while coming off of his 2019 release, The Journey to a Smile, his first in five years. Prior to this album's release, MaLLy has been partaking in a transformative period of his life, in which he spent time practicing meditation, Buddhism and sobriety.

Ashley DuBose is widely known for her hit single, "Intoxicated," and for her participation in Season 5 of NBC’s The Voice. DuBose's music is making its way to listeners all over the world; with fans in more than 37 countries, the singer-songwriter continues to spread feel-good music to the masses, with dreams of one day realizing Cee-Lo Green’s 2013 prediction that he will be rooting for Ashley DuBose “front row at the Grammys!”

Molly Maher is a singer and songwriter from St. Paul who describes herself as“Americana with a side of roots.” Her music contains an incomparable level of depth and soul, which, when recognized, has led Maher to perform alongside many critically acclaimed musicians such as John Hiatt, Lucinda Williams and Marty Stuart.

Mayda is a Korean multi-instrumentalist and producer whose music offers a unique blend of R&B, pop and funk, and fully embodies the Minneapolis sound. Her music has been featured both locally and internationally, on networks such as MTV and Showtime.

Bad Bad Hats are an indie-rock band made up of Kerry Alexander, Chris Hoge and Connor Davidson, who are known for writing tunes that act as earworms you can’t get out of your head — in a good way. They have mastered the craft of pop-songwriting and have made multiple albums that showcase a classic pop sound, with a few nods to the simplicity of ‘90s rock.

Lady Midnight is an ethereal vocalist and performance artist who draws upon her multidisciplinary background in visual art, dance and Afro-indigenous roots to create work that timelessly reflects our collective lives. Lady Midnight has recorded with international touring artists, and she has dedicated her life to using the arts as a power for change and confronting trauma.

We want Sounds Like Home to have a festival feel, so we made a print-at-home lanyard. Share your email address and we'll send you the PDF for an approximation of that VIP feeling.

You must be 13 or older to submit any information to Minnesota Public Radio. The personally identifying information you provide will not be sold, shared, or used for purposes other than to communicate with you about things like our programs, products and services. See Terms of Use and Privacy.