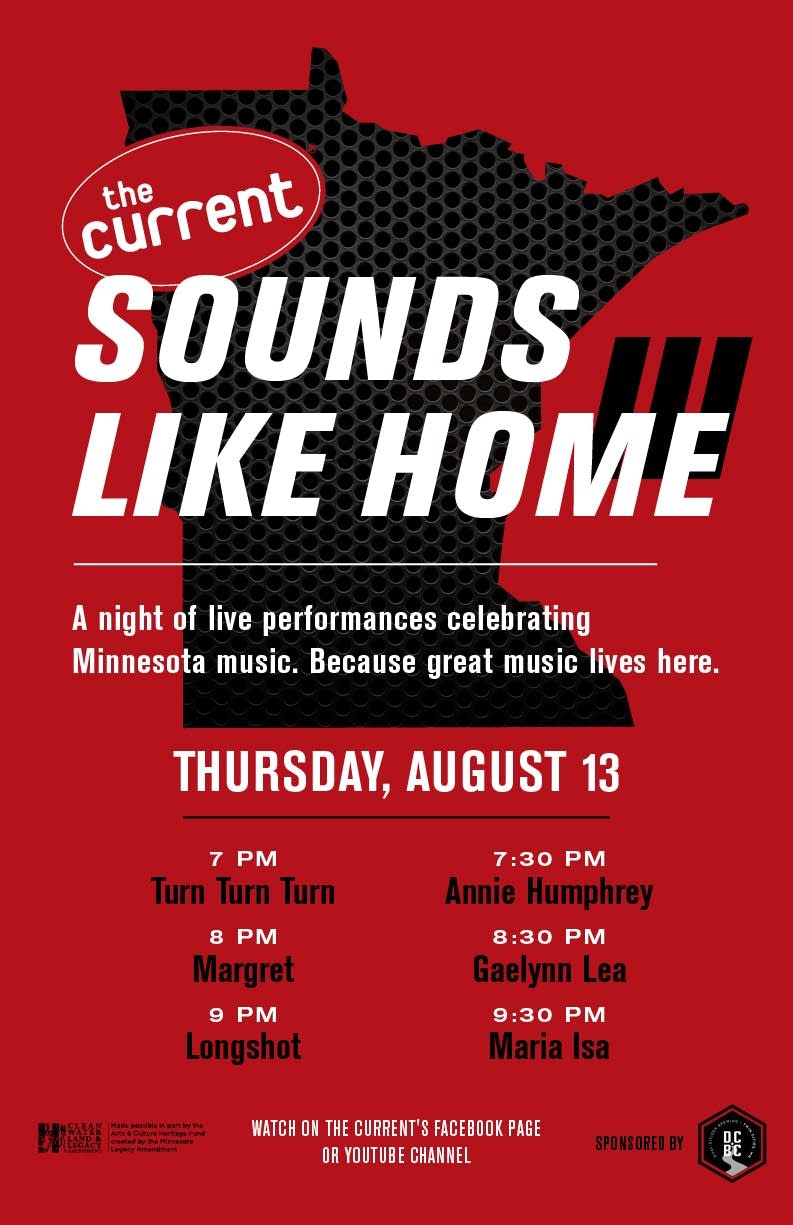 
On August 13, 2020, The Current is hosting round three of Sounds Like Home. It’s an evening of virtual performances celebrating Minnesota musicians. Join an incredible lineup of local musicians and Andrea Swensson from The Current as we meet up on the internet for a virtual festival. Great music lives here, and you can still enjoy it live on The Current’s YouTube channel or Facebook page!

Margret The ambient pop of Margret, the first solo effort by longtime Minneapolis electronic vocalist Maggie Morrison, is as transient as it is memorable. Over three tracks, Margret captures her yearnings in glass jars, before taking a hammer to the whole shelf. But this is not to say that Margret is reckless. The songs that make up her EP are sensitive, hopeful, and dance-inflected. Keeping in line with similar acts like Poliça and Gayngs, there’s a tenderness to the electronic beats and sequenced hums; a ghost in the shell.

Longshot AKA MC Longshot, is a Chicago-born, Minneapolis-based rapper and activist. Longshot wrote, recorded, and released his powerful EP, I'm Saying, just days after the tragic death of George Floyd, and in the midst of uprisings in the Twin Cities. And, his tenth studio album, Champion, drops on August 7.

Annie Humphrey is an Ojibwe musician, visual artist, activist, grandmother, Marine corp veteran, and an overall force of nature who was born and raised on the Leech Lake Reservation in Northern Minnesota. Humphrey has been recording work for three decades - she was named Artist of the Year at the 2018 Native American Music Awards, and released a new album earlier this year called Eat What You Kill.

Gaelynn Lea A one-time Tiny Desk star and longtime Duluth resident, Gaelynn Lea’s Gaelic-inspired folk-rock mixes classical composition with experimental ambiance. Prior to going viral as the winner of the 2016 Tiny Desk Contest, Lea worked with Low’s Alan Sparhawk and played with folk veteran Charlie Parr. Now, the 36-year-old performs weekly virtual gigs (in the absence of live touring) and lobbies for the comprehensive inclusion of disabled folks in the music industry.

Maria Isa is a singer, songwriter, actress, rapper, producer, and activist who was born in Minnesota and raised on St. Paul's West Side. Isa uses her music to a spread a message, and is known for fusing Latino rhythms, R&B, soul, and hip hop. Most recently, she recorded "Como Duele (Bomba 4 Big Floyd)," in honor of George Floyd, and released a new album called Amor Universal.

Thank you to Dual Citizen Brewing for its support of Sounds Like Home III.

We want Sounds Like Home to have a festival feel, so we made a print-at-home lanyard. Share your email address and we'll send you the PDF for an approximation of that VIP feeling.

You must be 13 or older to submit any information to Minnesota Public Radio. The personally identifying information you provide will not be sold, shared, or used for purposes other than to communicate with you about things like our programs, products and services. See Terms of Use and Privacy.