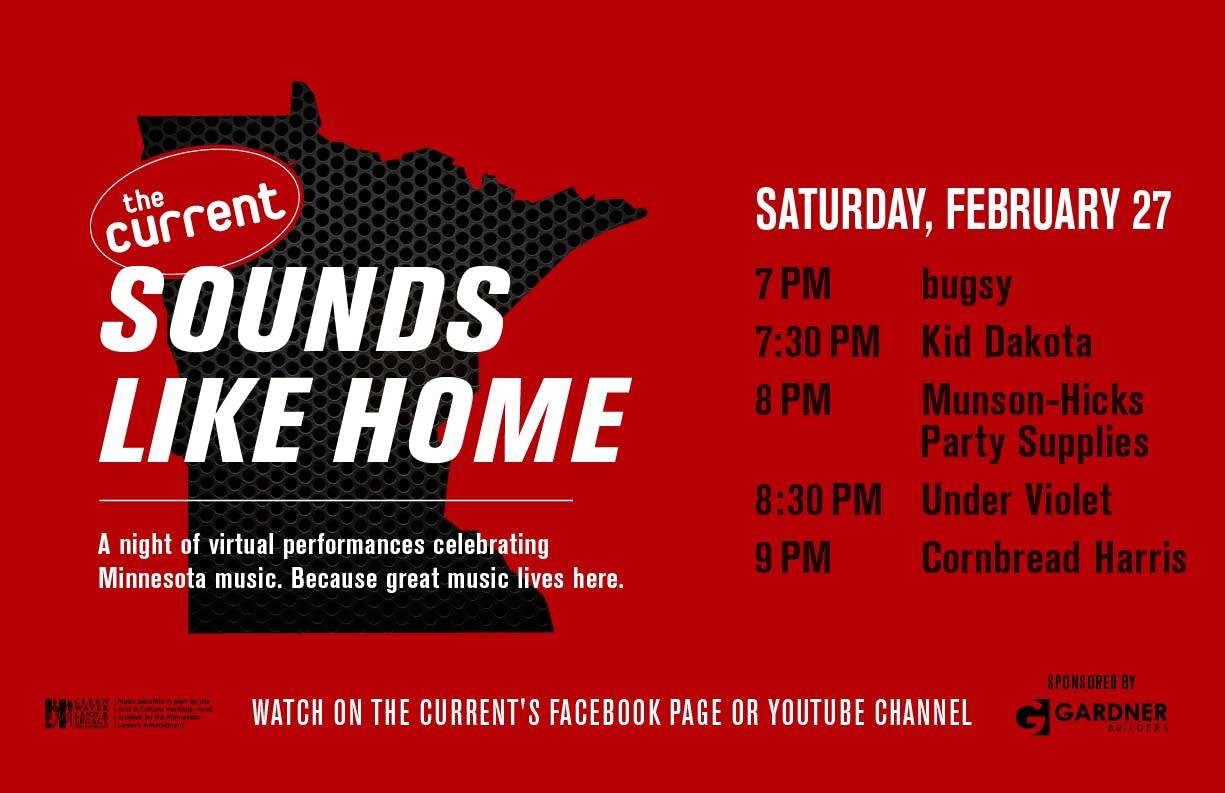 
On Saturday, Feb. 27, The Current is hosting round six of Sounds Like Home. It’s another burst of virtual performances celebrating Minnesota musicians. Join an incredible lineup of local musicians and Andrea Swensson from The Current as we meet up on the internet for a virtual festival. Great music lives here, and you can still enjoy it live on The Current’s YouTube channel or Facebook page!

Bugsy is an indie-pop quartet that began as the brainchild of Emily Schoonover from Bruise Violet. Outside of Bruise Violet, Schoonover began creating music under the name Sharon is Karen, which later changed to Bugsy. After releasing several solo demos, Bugsy expanded, and now features Griffen Desai on guitar, Shannon Maroney on bass and backing vocals, and Alex Norman on drums. They released their first EP, Teratoma, in February 2020, and have most recently released a single called "Talk to You" back in September of 2020.

Kid Dakota is the musical moniker of Darren Jackson. The project was initially named “Kid Dakota and the Tumbleweeds,” which acted as both an homage to his home state of South Dakota and a parody of Kid Rock. While the project’s name was initially developed as a parody, Jackson’s music is anything but. He has had lasting power in the Twin Cities’ music scene, as he has been putting out records for just over 20 years now. His most recent album is called Age of Roaches, which was released in December 2020.

Munson-Hicks Party Supplies is a collaboration between John Munson (of the New Standards, Semisonic, and Trip Shakespeare) and Dylan Hicks. Two initially paired up to write a musical together but began to find themselves writing songs that had nothing to do with the plot of this musical, which led to the creation of their self-titled debut record. Hicks tends to do most of the writing, while Munson does most of the singing. The two were joined by Zacc Harris on guitar, Richard Medek on drums, and a handful of other guests to create their record, which was released in September 2020.

Under Violet are an indie-folk band led by Sara Bischoff, who has previously performed in bands such as Web of Sunsets and Heavy Deeds. The group has been rounded out by other noteworthy local music veterans such as Jeremy Ylvisaker, Chris Bierden, Mike Gunvalson, and more. The band released their self-titled debut in 2019 and appeared on City Pages’ Picked to Click and First Avenue's Best New Bands that year. Under Violet recently released a follow up record called Threes in January 2021.

Cornbread Harris is a legendary singer, pianist, and composer also known for his lively stage presence and priceless sense of humor. Harris found passion and comfort in playing the Blues on piano after he finished serving in the U.S. infantry during World War II and has gone on to make a lifelong a career out of it. Harris is now 93 years old and has been extremely active in the Twin Cities music scene ever since. He often performs solo but also performs with his band, Cornbread Harris And the Broken Hipsters.

Thank you to Gardner Builders for their support of Sounds Like Home VI.