In the Doomtree crew, friendship comes first, but it's a friendship based on music and shared dreams. The group's roots go back to the '90s and Hopkins West Junior High, where founding members Stef Alexander, or P.O.S., and DJ Marshal Larada played together in punk bands. Doomtree started to take shape about six years ago, but not as a conscious effort to form an organized group. Things happened pretty spontaneously. 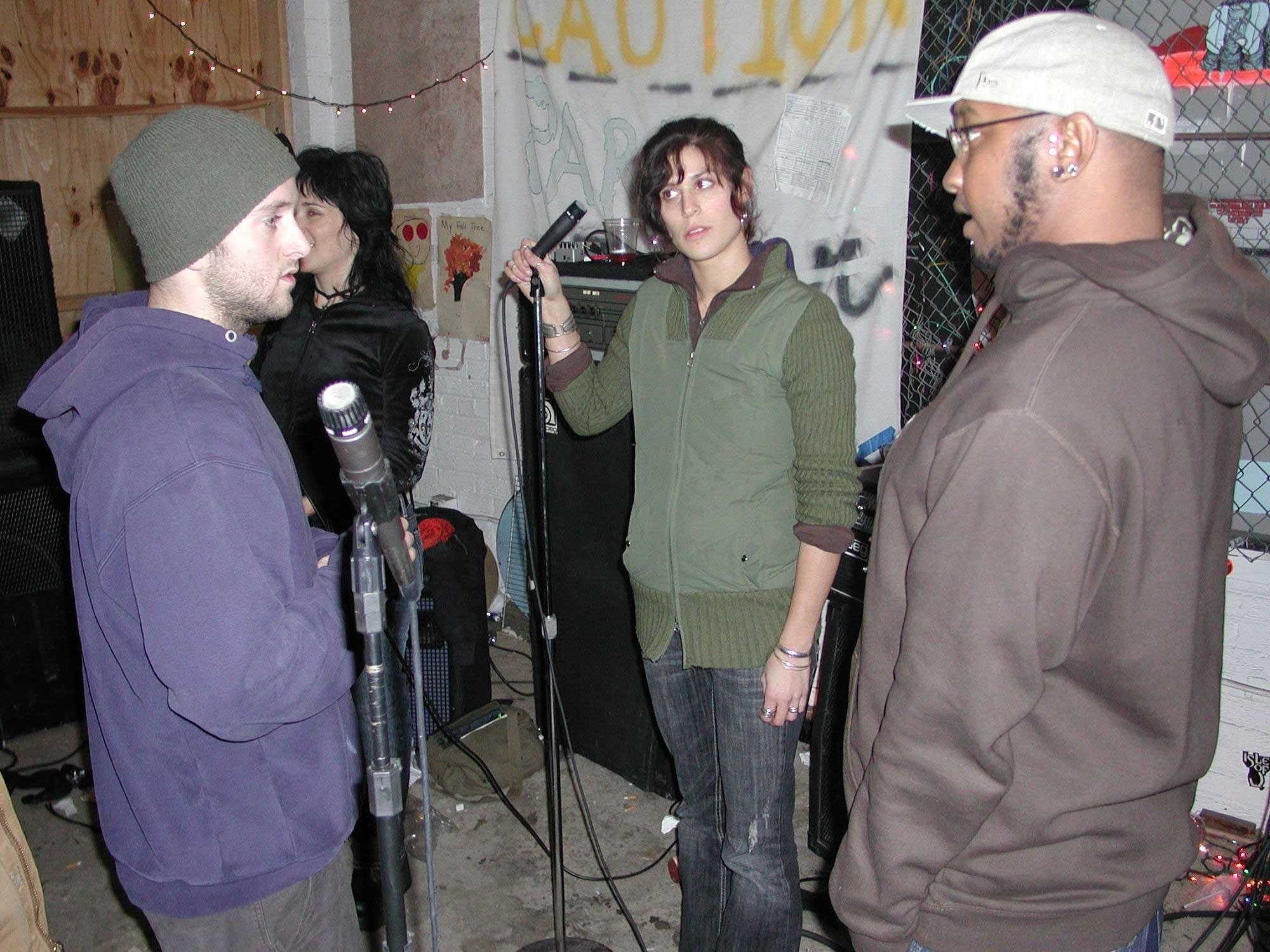 He says that without help from friends like Cecil Otter, there might have been no show at all. "So if I take these four songs and he takes his song and a half and then we both take this verse that we haven't really matched up with anything yet and put it over this random beat we found, then we can fill a half-hour set. And then as more songs and more things happened we were already doing it that way, and that's just how it stayed."

As the collaborations and friendships grew, so did Doomtree. It's now composed of five DJs and five rappers, including Cecil Otter, Sims, Mike Mictlan and Dessa Darling, in addition to P.O.S. All of the Doomtree artists also have a role on its business side, from recording, marketing, and booking, to set building and Web design.

"We don't have like a staff or anything like that, so pretty much anything that needs to get done gets passed around based on people's availability and skill set," says P.O.S.

On the music side, Doomtree operates more like a family. The group's headquarters is an old Victorian in the Uptown neighborhood of Minneapolis. Members call it the Doomtree mansion. Four of them reside there. Inside, the place looks like a frat house after a pledge party, and for Doomtree, musicmaking and partying often go hand-in-hand. There's a makeshift studio in the dining room and an adjoining closet with a microphone. 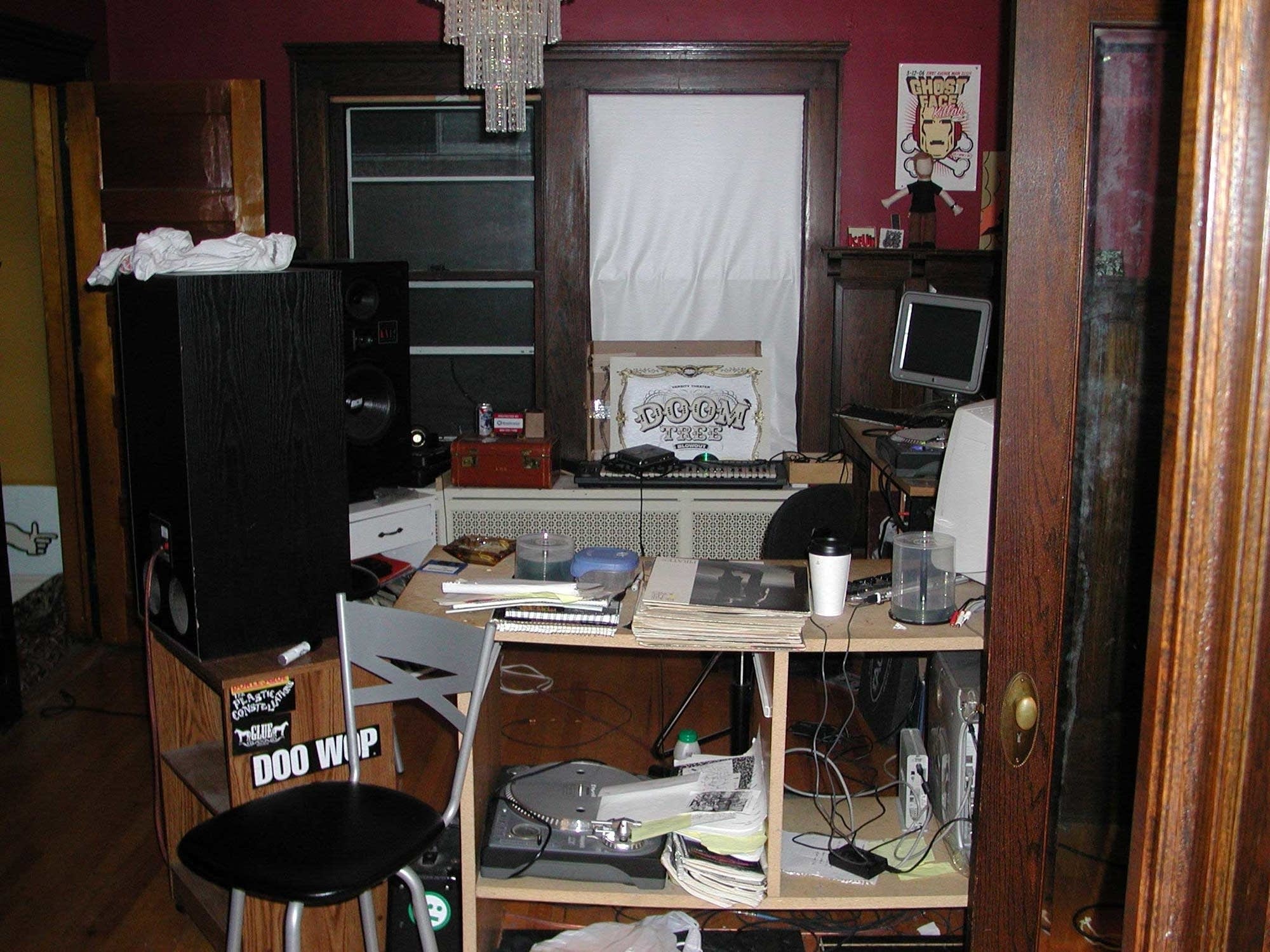 Emcee Dessa Darling says the closet is lined with foam insulation: "Whoever's recording will kind of lock themselves in the closet and then shout or knock commands to whoever's sitting behind the board. Usually that happens between 11:00 and 3:00 a.m. with some beers and social lubricants."

For the rapper Sims, one advantage of being in Doomtree is its built-in quality control. As friends, they've developed a high level of respect and trust, which he says helps them function as each other's editors.

Whether their assessment is good or bad, Sims says he knows they're being honest. "If you try something out and it doesn't work they'll tell you," he says. "It's not like, 'Oh yeah, that was good too.' It's in everyone's best interest to make that guy's song as good as it can be, 'cause it's going to help everyone in the long run." 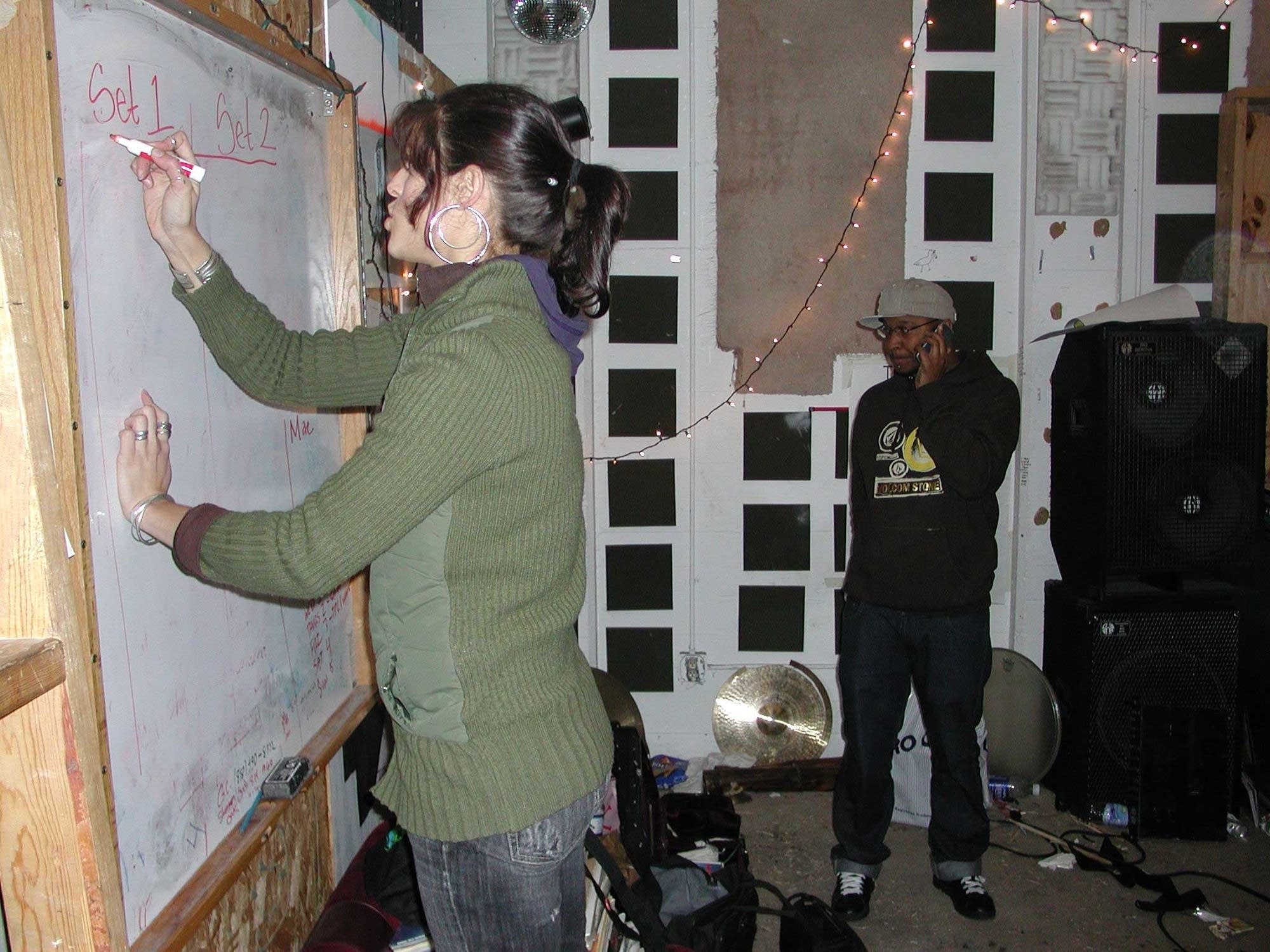 Dessa writes out the band's set list on a whiteboard. (MPR Photo/Chris Roberts)

Despite their closeness, it's hard to pinpoint a definitive Doomtree sound. In the beginning it was raw and gritty, perhaps because of the members' rock backgrounds and lack of sophisticated equipment. But their beats and soundscapes continue to evolve.

P.O.S. thinks of the Doomtree aesthetic as "broken hip-hop." That description resonates with Dessa. "If you listen to our lyrics, that's probably self-evident," she says. "Most people talk about a broken political system, or broken hearts or broken heads."

P.O.S. Is Doomtree's most acclaimed rapper. On his 2004 debut CD "Ipecac Neat," he won the attention of critics with his fiery, abrasive blend of hip-hop and punk rock. This year, P.O.S. went national with his release "Audition," which earned raves from publications across the country, including the Seattle Weekly and the Boston Herald.

Steve McPherson, music editor for Pulse of the Twin Cities, says despite P.O.S.'s recognition and the other emcees' efforts to build their own audiences, Doomtree's strength is in its numbers. "On their own they're each impressive," he says. "But just to have them all in one room, the energy of them feeding off each other is fantastic."

To McPherson, hip-hop's initial shock value has faded. It's mainstream now. He says Doomtree members are part of a new wave who grew up with the genre and are re-envisioning the way it's produced and presented. "I grew up with rock 'n' roll," McPherson says. "It's just there. We didn't think about it as rebellion, so we began to use it in different ways. And I think that's what hip-hop people like Doomtree are beginning to do." 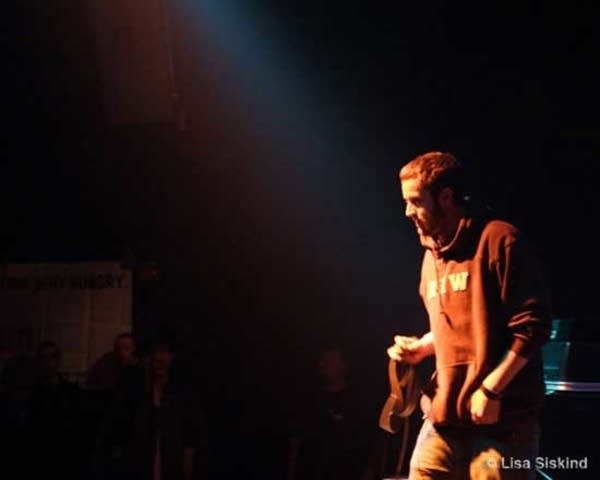 Sims, one of the members of Doomtree, shown at a recent performance. (Photo copyright Lisa Siskind, courtesy of Doomtree)

Doomtree's next step is to put out what members call a "crew" record, featuring all of them on one CD. P.O.S. says it'll be the first attempt to introduce the whole group to the rest of the country. "Since it's the first one and we're putting all the skill that we've developed as individuals into it, we're gonna put all the skill that we've developed as a business entity into it too, because this is all we've ever wanted to do," he says.

Members hope to release the first Doomtree crew record by the middle of next year.

All ten performers in Doomtree will flood the stage at First Avenue Saturday night as part of the second annual "Doomtree Blowout." Doors open at 8:00.