On the battlefields of hip-hop, boasting is one of a rapper's primary weapons.

On his new CD, "Worth the Wait," Minneapolis emcee 'Carnage the Executioner' repeatedly asserts his superiority. But based on the hardships he's overcome in his personal life and his sheer vocal prowess, Carnage has earned those bragging rights.

The new CD is Carnage's full-length solo debut. It's a chance to share a story of survival that until now the veteran rapper hasn't told -- his own.

Carnage, who's real name is Terrell Woods, is from Chicago. His mom, who raised him without a father, was an alcoholic and drug addict. One of his first memories is of a domestic skirmish.

"Two of my aunts got into a fight, and I was standing in the area and I got knocked down a whole flight of stairs," he said.

His mom moved the family to Minneapolis, where she had an affair with a married man who beat her.

"You want to protect your mom and you don't know what's going on," he said. "We're trying to get in and trying stop it, and we'd get thrown like a wet rag across the room. Then my mom got into alcohol and started drinking really heavily, and we got evicted from a couple of apartment buildings."

When he was 12, Carnage and his sister were placed in foster care, but not before he says he was abused by a male relative. By then Carnage had become a street hustler, stealing food, clothes, and toys when he needed or wanted them. He deliberately stopped short of becoming a burglar or a car thief. 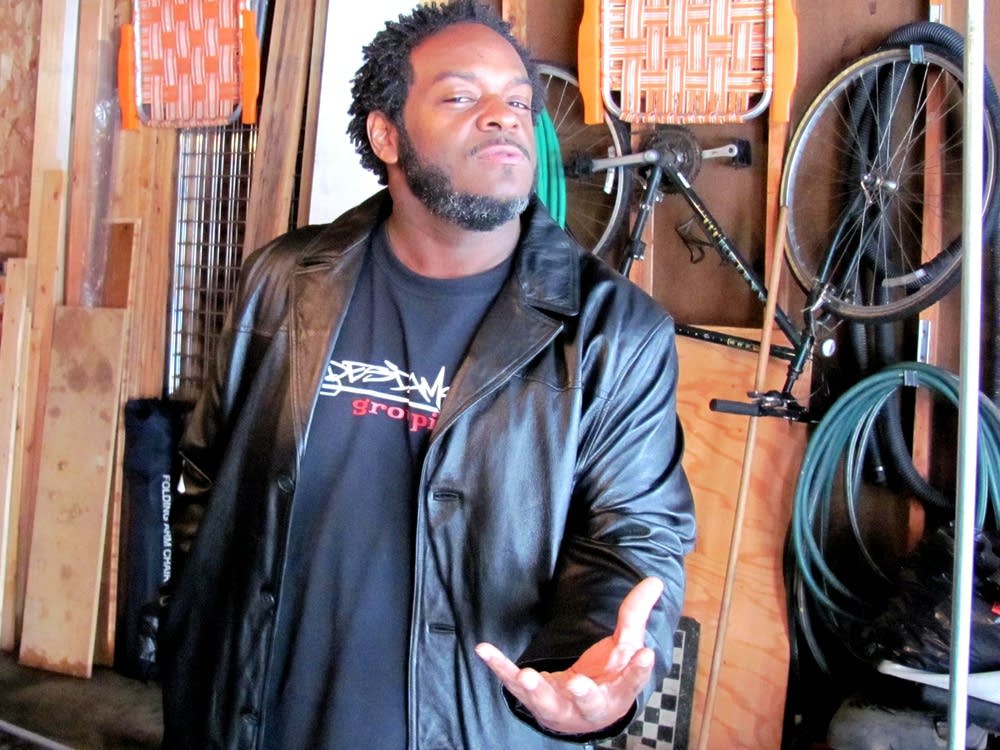 Carnage the Executioner stands in a Vadnais Heights garage right before a video shoot. Carnage, who's real name is Terrell Woods, has released his full length solo debut, "Worth the Wait." (MPR Photo/Chris Roberts)

"But I'll go and steal a sandwich and some pop and some chips so that I can eat while I'm out today, you know while my mom's at home shooting up," he said. "I knew what I needed to do to survive, and I learned it early on. But I also knew that there was consequences for my actions, so I would only take it so far."

Despite all the negativity and abuse he witnessed as a kid, Carnage says he always knew he would escape it, and he promised himself he wouldn't get sucked back in.

In local hip-hop circles, Carnage is seen as an immense yet overlooked talent who tends to steal shows when he takes the stage. He's best known for some rather astonishing skills as a vocal percussionist, or beat boxer.

"The Superhuman Multitrack" on his new CD is made up exclusively of beats and sounds manufactured by Carnage's mouth.

"Even though he's not saying words, he still like exudes this presence about him," she said. "Sometimes I'm just like, 'What? Where does that come from?'"

Carnage will tell you he wasn't born with that talent. It took years of practice.

"You don't just come out learning how to do that," he said. "You have to condition your face to be able to know how to move like that."

Carnage applies his acute sense of rhythm as a beat boxer to his rhymes, his flow. He's been told that as a rapper he sounds more like a jazz saxophonist.

"Some of the rhymes that I write, like 'Darken,' for example, when I was writing that I was like ... I want this to be more of a conversation," he said. "I want it to be all over the place. But I want it to come back at a point where people can follow it, because people resonate with the downbeat."

Given his microphone skills, some wonder why the 36-year-old Carnage hasn't made more waves as a rapper.

"I think people think of him in relation to other people more than on his own, necessarily," said City Pages music critic Jeff Gage.

After functioning for years as a sidekick or guest emcee for other artists, Carnage is coming into his own, and becoming more of a storyteller in his rapping, Gage said.

"He's been delving a lot into his own personal narrative to do some of that," Gage said. "I think that he's growing a lot in that sense. And considering his natural skills as a rapper, I think there's a lot of potential there for what he can do with it."

Carnage will perform at a release party at the Cabooze on Feb. 17.