Health officials struggling to contain a
measles outbreak that's hit hard in Minneapolis' large Somali
community are running into resistance from parents who fear the
vaccine could give their children autism.

Fourteen confirmed measles cases have been reported in Minnesota
since February. Half have been in Somali children, six of whom were
not vaccinated and one who was not old enough for shots.

State
officials have linked all but one of the cases to an unvaccinated
Somali infant who returned from a trip to Kenya in February. The
state had reported zero or one case of measles a year for most of
the past decade.

Amid the outbreak, a now-discredited British researcher who
claimed there was a link between vaccines and autism has been
meeting with local Somalis. Some worry Andrew Wakefield is stoking
vaccination fears, but organizers say the meetings were merely a
chance for parents to ask him questions.

"Unfortunately a lot of the media thinks he's saying 'Don't get
vaccinated.' That's far from the truth. He's basically encouraging
people to get vaccinated, but do your homework and know the risks,"
said Wayne Rohde, a co-founder of the Vaccine Safety Council of
Minnesota, which says parents should have other options for
immunizing their children.

Measles has been all but eradicated in the United States, but
accounts for about 200,000 annual deaths worldwide, according to
the Centers for Disease Control and Prevention. None of those
infected in Minnesota have died, though eight have required
hospitalization.

The infections come as autism concerns have surged over an
apparent rise in cases in Minnesota's Somali community, the largest
in the U.S. Officials, though, haven't determined if that's really
happening. 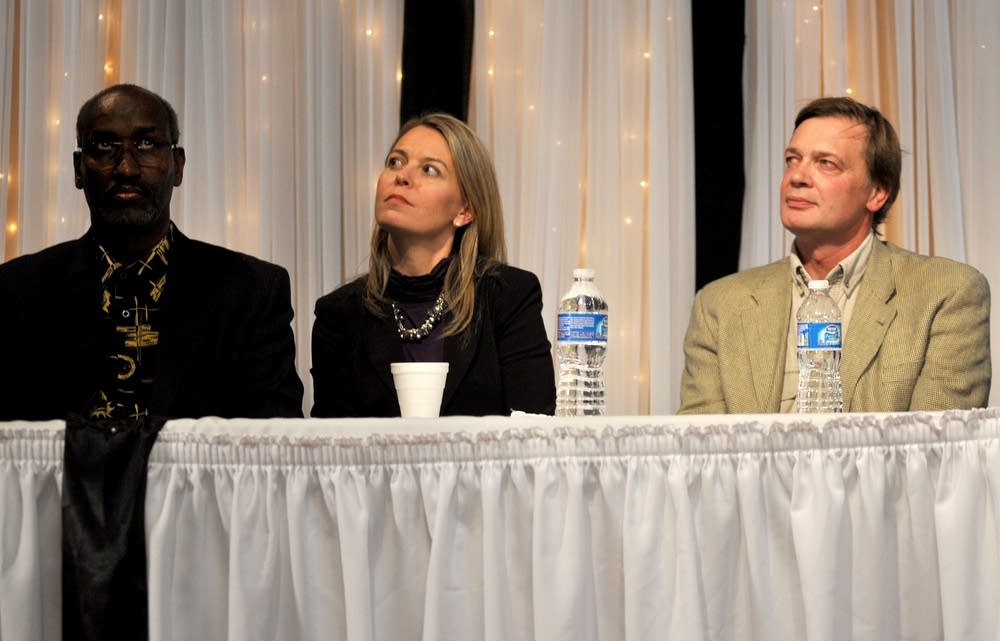 The Minnesota Department of Public Health found in 2009 that
young Somali children in Minneapolis public schools were
over-represented in autism programs, but cautioned that alone
didn't prove a higher rate of autism. The CDC and National
Institutes of Health are working with the advocacy group Autism
Speaks on a more systematic study.

Critics argue new efforts are moving too slowly. The lack of
answers has frustrated parents of autistic children like Idil
Abdull, co-founder of the Somali American Autism Foundation.
Abdull, who lives in suburban Savage, said public officials need to
be more active with research, resources and services.

Wakefield's work fueled a backlash against childhood
vaccinations after he published a 1998 paper in the medical journal
Lancet linking autism to the measles-mumps-rubella (MMR) vaccine in
a dozen children.

But other medical researchers and the Sunday
Times of London called Wakefield's work into question. The Lancet
retracted his paper last year, the U.K.'s General Medical Council
ordered that his name be erased from the country's medical
register, and the British Medical Journal in January denounced him
as a fraud.

"There is still a significant level of concern in the Somali community, and deservedly so."

Wakefield does not have a listed telephone number and has not
responded to emails sent by The Associated Press or messages left
with his publisher. But he issued a statement in January standing
by his work and calling for more research to determine if
environmental triggers, including vaccines, cause autism.

"Any medical professional, government official or journalist
who states that the case is closed on whether vaccines cause autism
is jumping to conclusions without the research to back it up," he
said.

Numerous studies addressing autism and vaccines, or the
mercury-based preservative thimerosal, which was formerly used to
preserve vaccines, have so far found no link.

About 100 parents attended Wakefield's first Minneapolis
appearance in December. About 15 met with him during his most
recent visit, on March 23. Rohde said he and others were asked to
arrange the meeting by Somali parents who wanted the chance to
question Wakefield privately.

Several parents said they were wary of the MMR vaccine because
measles is usually temporary while autism is permanent, said Rohde,
who lives in suburban Woodbury and has a 13-year-old with autism.
Rohde said he doesn't claim the vaccine caused his son's autism by
itself but believes it was a factor.

Dr. Abdirahman Mohamed, a Minneapolis Somali family practice
physician, contends Wakefield has caused a global hysteria that has
cost lives. He said he has warned the Somali community to stay away
from the researcher.

Hodan Hassan, of Minneapolis, said she stopped vaccinating her
four children after her daughter Geni, now 6, was diagnosed with
autism when she was about a year old. Hassan said she went to
Wakefield's presentation in December and considered him a hero.
Then a doctor friend urged her to take a closer look at the
rejection of Wakefield's research.

"I feel personally hurt because I believed in him and trusted
him, and now I find out all these lies and other things out there,"
said Hassan, who is currently getting all her children up to date
on their shots.

Minnesota requires that all children enrolled in
school be vaccinated against measles and other common diseases, but
parents can opt out for "conscientiously held beliefs."

Health officials are working with Somali community leaders to
urge more parents to get their children vaccinated, though few
people have taken advantage of recent clinics.

One clinic conducted
last weekend by Children's Hospital in Minneapolis prepared 600
doses, but only 20 children and four adults showed up. Three were
Somalis, said Patsy Stinchfield, director of the infectious disease
program for Children's Hospitals and Clinics of Minnesota.

"There is still a significant level of concern in the Somali
community, and deservedly so," said Minnesota
Department of Public Health spokesman Buddy Ferguson, noting
scientists still don't know what causes autism.

"What we can tell people is that numerous attempts have been
made to test the idea scientifically that there's a link between
vaccines and autism using large, well-designed studies," he said.
"They've never been able to find a link."


(Copyright 2011 by The Associated Press. All Rights Reserved.)