The album, which has been a work-in-the-making for the past five years, was inspired by the soundtracks and scores from Italian cinema of the 60s and 70s. Mark Wheat spoke with the longtime collaborators on May 2. 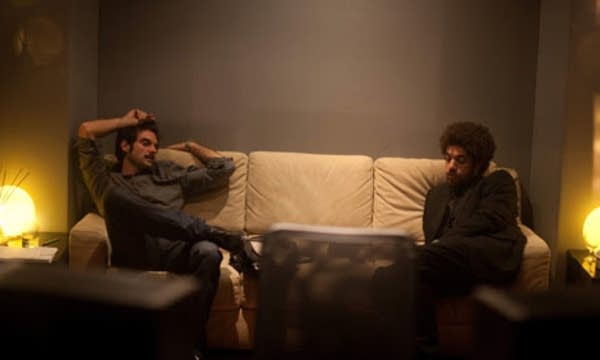 Danger Mouse and Daniele Luppi (Image courtesy of the artist)

Mark Wheat: Hi guys, thanks for taking time out to talk to us. If I can, Danielle, I'd like to start with you and say, our listeners are more familiar w/ the name Danger Mouse, and even though you've been involved in some of the productions over the last couple of years, why step out from behind the curtain and into the limelight with this project?

Daniele Luppi: I think it's the same way we've always worked. Things like this happen naturally. I think we did this project without thinking about all those elements of being exposed to the public or not. Let's not forget that Rome was really — I mean it's coming out as the newest thing — but was actually the very first work we did together, and through the years while Rome was sitting on the desk we had the chance to work on Broken Bells, Dark Night of the Soul and Gnarls Barkley. So it's never really been an element of discussion.

Daniele Luppi: I grew up in Italy and I would watch Italian movies  that's everything they would broadcast anyway  Sergio Leone, Fellini, that kind of thing. And I was really impressed when I met Brian because he had a tremendous collection of movies and Italian records from the 60s and 70s. He really had some titles beyond Sergio Leone "dollars" trilogy titles.

Mark Wheat: Given the title Rome — were you guys always working with that title?

Danger Mouse: No, that was always our codeword, which is not much of a secret word to use I guess, but that's we always talked about — the Rome project. I was similar to Danielle, the first music I ever did — ever — was based on seeing music in my film classes. and I was really inspired by it not the general ones, but the ones from the italian film soundtracks — they just stood out. and that made me wanna go home and try to replicate it. so the first music I ever made was on 4 tracks trying to use guitars and pianos and drums and stuff like that, trying to replicate this old music. So my first couple releases I did were instrumental — mock soundtracks, before I got into other stuff like sampling and other things — it just wasn't very good.

Danger Mouse: At the time I didn't roll anywhere. Gnarls Barkley took a long time. I started on that with Cee-Lo in 2003 and it didn't come out until 2006. It took almost 4 years. things do take a long time sometimes and this was one of those things that just had to be right, had to be a certain way. I don't always know how to get stuff to be right, but I know when it's wrong, with this it was never really wrong, but it wasn't right yet. So we kept having to add stuff. We went and took a whole trip just to do choirs, and then we went and did a whole trip to do the strings. We have to keep writing them as they went along and you don't know who the vocalists are — you can't write the strings until you have the vocals — and we didn't know who the vocalists were going to be and we definitely didn't want to make a mistake on who we chose or asked to do the lead vocals with, so there were reasons why it all happened this way.

Mark Wheat: Before we get to the vocalists, let's talk about the theme for a little while. Again, conceptually in Italian, Danielle, did you get the final say on what the theme of Rome should be? As a writer is that where your main argument came about?

Daniele Luppi: No, we never had any arguments with each other.

Danger Mouse: We did all these songs in weird order. I don't remember what the actual order was and what songs we recorded first. We wrote the stuff and once we came back home we started to listen on our own and move stuff around and everything. I think the naming of the songs didn't come until.... that was one of the last things that was done.

Danger Mouse: If you say some of the titles, I really have to wrack my brain to remember 'Do you mean track 13? 5?'

These were just titles that we thought really — we ran them by each other — but when you're living with something that close for that long, they're going to take shape in your own head and you're going to have your own meanings for them.

Danger Mouse: That was one we particularly loved. Daniele came up with the basis of that song, the chords and the feel of it, and we sat with it for awhile. I tried a number of attempts to find a vocal melody of some kind for it to be sung on. It just didn't work, so all the melodies that were supposed to be vocal melodies ended up being strings. 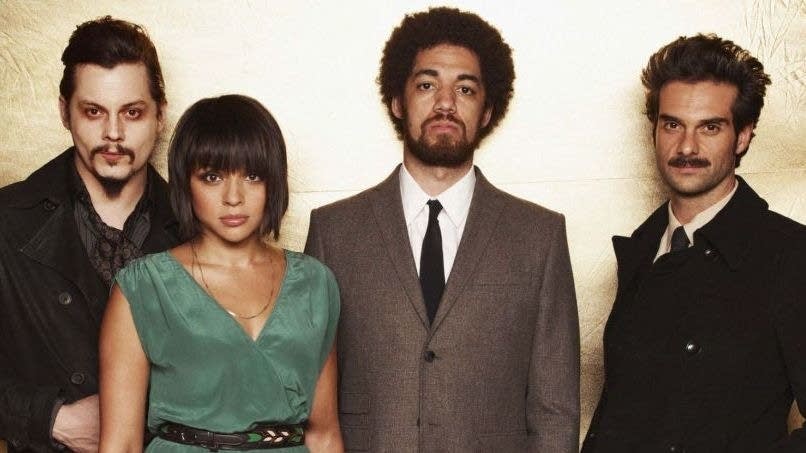 Daniele Luppi: We refer to Rome as a mental space where we went, so to speak.

Danger Mouse: That was our lives when we did this album — it was Rome. Over and over again we were recording there. I didn't get to see that much of it. I got to eat the food and record the music, but that was it. To be honest, it was just simpler. Rome was what we were referring to it as, that's where we went, that's where the players were and that's what it was.

Daniele Luppi: It had to be Rome.

Mark Wheat: Perfect. This might be a tough question, but Danger Mouse has become the master collaborator and Daniele, you've been involved in a lot of those. Do you know what his secret is?

Daniele Luppi: I would say only that he has amazing taste. As you said, you say no to things, yes to others, and that's individual.

Mark Wheat: Speaking of taste  this whole project has a very tasteful presentation. Everything about this so far on the web, the website, the look of it, looks enormous. It looks like a movie. And Danger Mouse, if you had a dream, would this project be a movie?

Danger Mouse: You know what it is? A lot of things about films and music are very similar. Music is very visual. I've always liked the way movie posters advertised movies much more than the way people advertise albums. So I incorporate that — Dark Night of the Soul had the same thing — 'Well, if this is better, just do it that way.'

And that's just the way this was done. I wasn't going to not do it that way just so I wouldn't have to explain to people that it's not a fake film soundtrack. [And] it is starring them, because it is. We wanted to make a really modern, cool record that had an amazing history. The sound of that [soundtrack] music was a big inspiration for us. The same way, for myself personally, like the Beatles or Kraftwerk. It's in the music I do, it's there. Each time I do something that has it in there, it's not an homage to that, it's just part of it, it's there. That's what it is.

This was a little more specific because, to get that sound, you can't just buy an old keyboard. These guys... that sound... those instruments... that studio... having somebody like Daniele who knows way more than I do as far as how to even get to that point... you have to do that, you have to do those things for this to be an element. You can't halfway do an element like this. I've sampled stuff that has these elements in it, and they sound great, but you can't just do that in your bedroom, which I've tried over and over and over to do.

Mark Wheat: That's great to hear Danger Mouse, because you've been one of the proponents suggesting that it was possible to a new audience of musicians. And it's great that you guys went back and explored the soul of the place, of the studio, and the musicians — Daniele, you used some of Ennio Morricone's session musicians, how was that for you?

Daniele Luppi: We wrote the songs first, and the next thing we wanted to do was to have those players that played those amazing soundtracks in the 60s to perform our music. The experience was really incredible. These guys are in their mid-70s to early 80s and they still play really well. They have a lot of fun playing, which is important as well. They deliver, but they do have their fun moments when they do that.

It was fun to see how at first they behaved — they were nice and polite — but after a half hour, they went back to their old yelling and screaming at each other. They couldn't really see each other. They were playing together, but we put these panels up keep the sound as pure as possible. So they were hearing each other, obviously, but they were constantly — like the drummer was saying to the guitarist 'See why are you pulling the beat like that?'

It was really incredible to hear the way they were playing this chord progression and how they crafted that.

Mark Wheat: Thank you Daniele, can you choose one more track from the album to play; and thanks for all the wonderful music you've given us over the years.

Mark Wheat: Perfect. Good luck gentlemen with the project and whichever direction you want to take it and thanks for spending time with us today.