The chief sponsor of a bill that would require universal background checks for gun buyers is not backing down, despite signs the measure doesn't have enough support to pass the House or his committee.

The announcement comes as a bipartisan group of lawmakers is scheduled to hold a news conference today to announce a separate gun bill that does not include universal background checks.

The dispute is creating a rift between two powerful DFL legislators.

For weeks, Rep. Michael Paymar, DFL-St. Paul, has been trying to round up support for his bill that would require universal background checks on nearly all gun purchases in Minnesota.

That plan has been widely criticized by gun rights group as an infringement on the 2nd Amendment. Even as Paymar held hearings and crafted his legislation, DFL legislative leaders, the National Rifle Association, public safety groups and the leading Republican legislator on gun rights worked behind the scenes to come up with an alternative.

Rep. Debra Hilstrom, DFL-Brooklyn Center, author of that alternative bill, says it has significant support in the Minnesota House.

"These are the proposals that have bipartisan support and geographic support," Hilstrom said. "Anytime in the Legislature that you have a proposal that has party lines and can cross geographic boundaries, it makes for good legislation."

Hilstrom declined to comment on specifics of her bill. But other co-authors say it does not include increased background checks. They say the bill would increase penalties for so-called straw purchases where people buy guns for others who are legally restricted from possessing firearms. It would make it against the law for convicted felons to carry ammunition in addition to firearms. It would also speed up the time for courts and state agencies to submit information to a federal database with the names of mentally ill people who are barred from buying guns.

Hilstrom's legislation sets up a showdown with Paymar, who chairs the House Public Safety Committee. Paymar said he is not backing off his push to require universal background checks. He called Hilstrom's bill a distraction and said he was disappointed that Hilstrom, who chairs the House Judiciary Committee, would propose a bill that does not require background checks.

"The cornerstone of my bill is universal background checks. The majority of Minnesotans support that. The majority of law enforcement supports that," Paymar said. "If Rep. Hilstrom wants to align herself with the NRA and come up with an alternative bill, there's nothing I can do to stop that."

Paymar said he does not intend to hold a hearing on Hilstrom's bill, but there also doesn't appear to be enough support on the committee to approve Paymar's bill.

There is support for Hillstrom's bill. Rep. Tony Cornish, R-Good Thunder, said he and 72 other House DFLers and Republicans have signed on, more than enough to pass the bill out of the House. The NRA and the Gun Owners Civil Rights Alliance also back the measure and are encouraging their members to lobby for its passage. 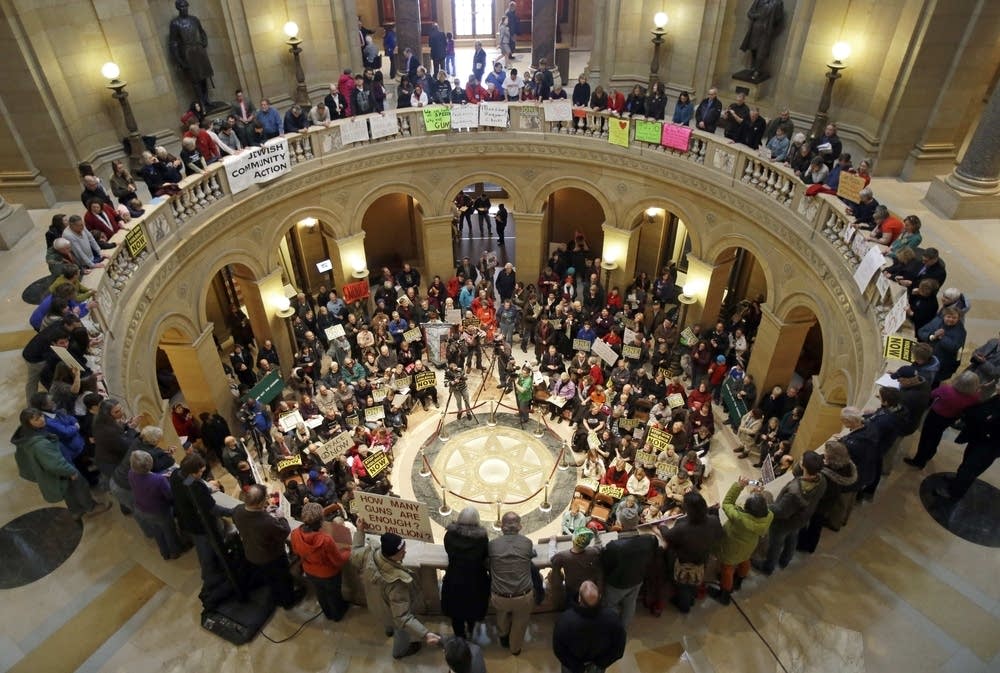 An overflow crowd gathered in the state Capitol Rotunda for a rally calling for an end to gun violence Monday, Feb. 18, 2013, in St. Paul, Minn. (AP Photo/Jim Mone)

"He would be lucky to get enough votes to get out of his own committee much less another committee or the floor. I think his bill is basically dead," Cornish said. "That's probably why he's upset, because the other bill seems to have legs where his bill doesn't."

If Paymar declines to give Hilstrom's bill a hearing, DFL legislative leaders may resort to a relatively rare procedural move and pull the bill from committee in order to get it to the House floor for a vote. If that happens, universal background checks could be finished for the year unless Gov. Mark Dayton insists they be a part of the legislation. Dayton told reporters that universal background checks are a common sense measure.

"I don't know what the bill would do without them. I'd have to see if there's constructive elements in it," Dayton said. "But I'm certainly going to urge that the Legislature include background checks as part of their legislation."

Paymar said he would like to hold a vote on his bill requiring universal background checks by March 15. Hilstrom and other legislators could try to substitute their bill for Paymar's during that hearing.