After days of silence that left fans wondering whether Bob Dylan would actually accept his historic Nobel Prize for Literature, Dylan has finally spoken about the award. In an interview with the Telegraph, Dylan said that he will "absolutely" travel to Sweden to accept the award "if it's at all possible." He said that receiving the award is "amazing, incredible. Whoever dreams about something like that?" (New York Times)

The Los Angeles band Collage (misidentified as being from Minneapolis in this Pitchfork story) have sued Mark Ronson and Bruno Mars over similarities between "Uptown Funk" and a 1983 single by Collage called "Young Girls." The lawsuit says that "Uptown Funk" clearly copied the "distinct funky" sound of "Young Girls." Only one of Collage's core members, Larry White, is still alive; the estates of two other members are named as plaintiffs in the suit.

It's long been assumed that the Smiths are never, ever getting back together — but Johnny Mar has just revealed that for a few days in 2008, a Smiths reunion seemed like a "very real prospect." The news comes in Marr's forthcoming memoir Set the Boy Free, in which Marr writes that when he and Morrissey met for a drink to talk about remastering the Smiths' catalog, the subject of a reunion came up. Logistics were even discussed, but then "suddenly there was radio silence" and that was the end of things. (Rolling Stone)

Newly-published vegan cookbooks pay tribute to Morrissey and Nick Cave. The musicians themselves aren't involved with the cookbooks, which are respectively titled Defensive Eating With Morrissey: Vegan Recipes From the One You Left Behind and Comfort Eating With Nick Cave: Vegan Recipes to Get Deep Inside of You. (Pitchfork)

Lennon letter to the Queen discovered in record sleeve

A British vinyl fan got quite a deal when they picked up a used record for the equivalent of $12. Inside the sleeve was a signed draft of a letter John Lennon wrote to Queen Elizabeth. The final copy of the letter was delivered in 1969, returning Lennon's Member of the British Empire medal in protest of the nation's foreign policy. The draft, which may have been unsent due to smudged ink in Lennon's signature, is valued at approximately $72,000. The identity of the letter's current owner has not been disclosed. (Rolling Stone) 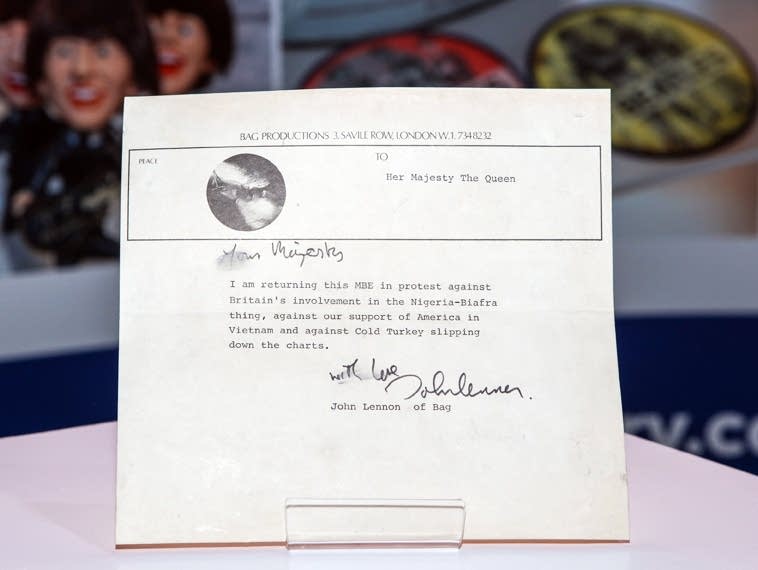 Steven and Barack hang out

What do you do when you're President of the United States and you happen to be in Orlando at the same time as Aerosmith? You invite Steven Tyler to Air Force One for a hangout, obviously. That's what Barack Obama did when he was in Florida to campaign for Hillary Clinton. (Billboard)

In New Orleans this weekend to headline the Voodoo Music + Arts Experience festival, Arcade Fire treated about 175 people in Halloween costumes to a secret show at Secondline Stages, where they debuted new material and covered Ray Parker Jr.’s "Ghostbusters." There's nothing for the rest of us to hear, though: phones weren't allowed. (New Orleans Times-Picayune)

Opera lover sparks scare at the Met by sprinkling...human remains?

A performance of Guillaume Tell at the Metropolitan Opera in New York on Saturday was cancelled midway through after a concertgoer walked up to the orchestra pit during intermission and sprinkled a powdery substance. There were fears that the powder could be a dangerous substance, but it turns out that it might just have been the remains of an opera lover whose friend came to sprinkle his ashes into the pit. "We appreciate opera lovers coming to the Met," said the opera's general manager Peter Gelb. "We hope that they will not bring their ashes with them." (Billboard)