On Saturday in Stockholm, Bob Dylan became the first person ever to be awarded the Nobel Prize in Literature for popular music lyrics. Dylan himself did not attend the ceremony — he cited preexisting commitments, but his specific whereabouts were unknown — and Patti Smith appeared on his behalf to sing the classic "A Hard Rain's A-Gonna Fall" accompanied by a string section. She had to stop and restart the performance after missing some lyrics due to, she said, nervousness; but when she finished, many in the hall were in tears.

Dylan also sent an acceptance speech that was read on his behalf. The statement addressed Dylan's delay in responding to the news of his award ("I was out on the road when I received this surprising news, and it took me more than a few minutes to properly process it"), touched on the question of whether a songwriter was qualified to receive the prize ("I would bet that the farthest thing from Shakespeare's mind was the question 'Is this literature?'"), and harkened back to his Minnesota youth:

When I started writing songs as a teenager, and even as I started to achieve some renown for my abilities, my aspirations for these songs only went so far. I thought they could be heard in coffeehouses or bars, maybe later in places like Carnegie Hall, the London Palladium. If I was really dreaming big, maybe I could imagine getting to make a record and then hearing my songs on the radio. That was really the big prize in my mind.

It still remains for Dylan to deliver the required Nobel lecture, at a place and time to be determined. "There is a chance that Bob Dylan will be performing in Stockholm next year, possibly in the spring," said the Swedish Academy in a statement. In that case, continued the statement, "he will have a perfect opportunity to deliver his lecture. We will post more information as soon as we have it." (New York Times)

In a hard-hitting speech at the Billboard Women in Music event on Friday, Madonna was named Woman of the Year and delivered a hard-hitting speech that critiqued ageism and sexism in popular culture. "To age is a sin" in pop music, she said, asserting her right to continue her pop career into her 50s in the face of what she describes as discrimination against older female stars. "You will be criticized, you will be vilified, and you will definitely not be played on the radio," she said.

Having weathered decades of debate over her music and image, Madonna suggested that she's about to back down now. "People say that I'm so controversial," she said. "But I think the most controversial thing that I've done is to stick around." (New York Times)

Recently, photographer Maya Washington said that prior to his death, Prince was considering a reality TV show that would have been set at Paisley Park. Netflix has now confirmed that its staff had discussions with Prince about such a show. Washington said Prince asked her to help with the show, and she told him that she'd only participate if Prince himself were in the program and let people see his sense of humor. His response, she remembers: "Maya, I can't be funny. I have to save the world." (Pitchfork)

In the wake of the deadly fire at Oakland's DIY "Ghost Ship" warehouse venue, underground music venues across the country are seeing closer attention and crackdowns by local authorities that don't want to see the tragedy repeated. "Event spaces in Philadelphia, Dallas, Nashville, Indianapolis and New Haven have reportedly been under greater scrutiny and could face closure," notes Billboard.

Many artists, however, are defending the space such venues provide for creative work that couldn't happen elsewhere. "I've felt some of the safest feelings I've ever felt in [warehouse] spaces where I can truly be myself and feel unjudged and unguarded and not worry about authority," says electronic musician Dan Deacon. "I've certainly felt unsafe in a crowd after a sporting event gets out and there's 50,000 drunk and screaming fans, but no one's taking about shutting down stadiums."

Documentary series to focus on Dr. Dre and Jimmy Iovine

Dr. Dre and Jimmy Iovine are to be the subjects of a new four-part HBO documentary series called The Defiant Ones. According to a press release, the series is directed by Allen Hughes (Menace II Society) and chronicles "the unlikely but ultimately unbreakable bond of trust and friendship between two street-smart men from different worlds who have shaped many of the most exciting and extreme moments in recent pop culture."

Coming to fame as a founding member of N.W.A., Dre went on to become one of the most successful producers and hip-hop artists of his generation. Iovine is a music producer known for classic albums by artists including Patti Smith (Horses) and Tom Petty (Damn the Torpedoes), as well as co-founding Interscope Records. Recently, the two have had huge success with their electronics line Beats by Dre.

As music stars flocked to support Democratic presidential nominee Hillary Clinton, her Republican rival Donald Trump bragged that he didn't need their help to win. He turned out to be right — but now who will play his inauguration? Maybe Garth Brooks, who's reportedly in talks to perform at the event and has made remarks suggesting he'd be open to it ("It's always about serving. It's what you do")...or the Duluth-educated rapper Riff Raff, who's volunteered to perform...as long as he's paid at least $50,000. ("I love money. And I'm in America. And I was born in America. And I love money. So, why wouldn't I?")

It remains to see whether Trump's team seals the deal with Riff Raff, but sources tell The Wrap that Trump is breaking with longstanding precedent by offering to pay artists' fees — possibly into the seven figures — for inauguration appearances. Artists including Aretha Franklin and Beyoncé, by contrast, performed at President Barack Obama’s inauguration events for only travel and production expenses.

Having just confirmed the release of a new album next year, the Jesus and Mary Chain have announced a 16-date tour of America and Europe in 2017. Local fans will have to do a little driving, though: the tour doesn't come any closer than Atlanta. (Pitchfork)

Symphonic rock band Procol Harum formed in England in 1967. That means the group turns 50 years old next year, and leader Gary Brooker says they're planning to release new music and play "quite a few concerts" to mark the occasion. "We thought we'll make a special effort to do something special," Brooker tells Billboard. "We're all still alive and kicking. And after all that time there's a lot of loyal people as well and there's a lot of younger people that we'd like to reach that like what we've done."

British artist Chris Barker has found viral success with his reconstruction of the Beatles’ Sgt. Pepper's Lonely Hearts Club Band cover featuring the many greats (musical and otherwise) who have died in 2016. Since Barker posted his initial redesign to Twitter on Dec. 9, others have edited the collage to include people like John Glenn who have died this month. (Billboard) 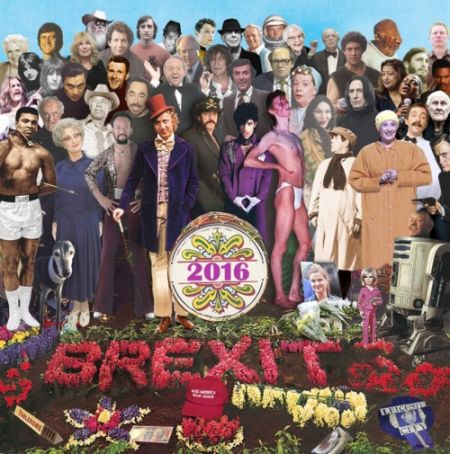