Last month marked 25 years since Super Bowl XXVI was played in Minneapolis — a first for Minnesota and only the second time the big game had been held in a cold weather winter city.

It was a bit ho-hum. Neither team scored in the first quarter but by the third, Washington had run up a 24-0 score on Buffalo and eventually won, 37-24.

One Minneapolis Star Tribune columnist wrote "the game was a mismatch...again putting the lie to all of this garbage about NFL parity."

But the game does go down in memory for including what now plays as a very outdated and even ridiculous halftime show.

With a theme built around Minneapolis being a place that does winter right, a barrage of people dressed like snowflakes, inflatable snowmen, and what appeared to be 5 percent of the state's population descended upon the field for 12 minutes of gosh-darn-wholesome goodness that the world never saw.

The halftime show on CBS had lower ratings than a live special of the show In Living Color on FOX.

Once the city won the bid in 1989 to host the 1992 game, the host committee got to work figuring out every logistic from securing hotel rooms to providing security and planning traffic flow.

While that happened, a company from Phoenix called Timberline Productions set ahead to plan the halftime show.

Timberline had produced shows like Sesame Street Live, but never a football game event. Its executives came together around a theme of showcasing Minnesota as the place where winter is the hottest time of the year!

"They are followed onto the field by a 35-piece snowflake drill team, a 150-piece fabric drill team and 60 professional dancers, creating an effect of cascading, swirling snowflakes. 'Winter Wonderland' will be accompanied by 20 ballroom couples, 30 costumed showgirls, and 60 hot dancers." 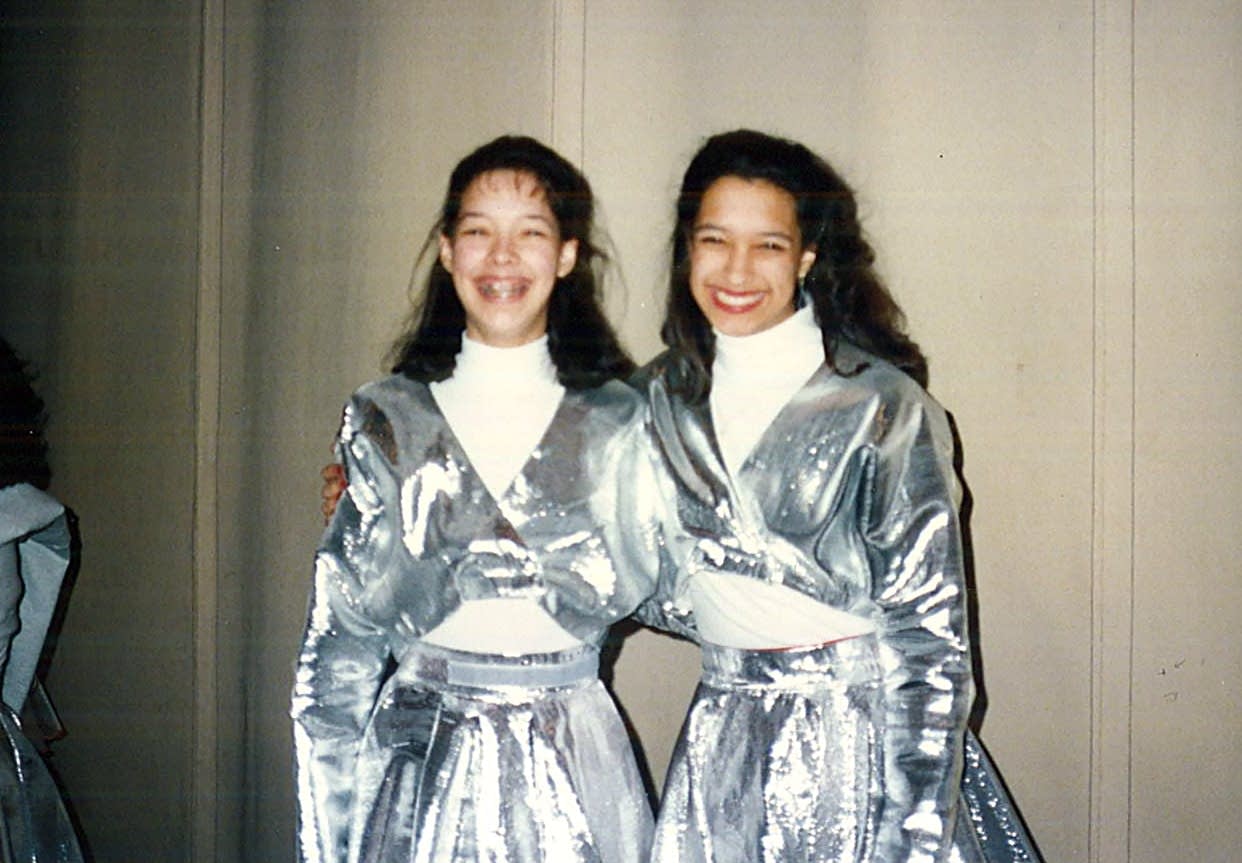 Sisters Maureen Ramirez, left, and Julie Karlen in their costumes for the Super Bowl halftime show at the Metrodome in this undated photo from 1992. (Courtesy Maureen Ramirez)

The songs included a rap about Frosty called "Do the Frosty," music that somehow didn't survive in American lore.

Skating champions Dorothy Hamill and Brian Boitano skated during a salute to the Winter Olympics that were about to begin in France; the 1980 Miracle on Ice hockey team was there, too, along with 75 people Rollerblading because, why not?

Nearly 2,000 people performed. Several hundred more volunteered. A nice handful of people across the state get to regale the same stories when they watch the Super Bowl with friends.

There were dance teams and color guards from high schools in St. Cloud, Wayzata, Bloomington, North High in Minneapolis, Irondale, and a lot more.

The spectacularly hokey show by Minneapolis and Timberline was just in keeping with the same kind of halftime show that had been performed up to that point.

Dave Mona, a retired public relations executive who served on the host committee said while the show was mediocre, they didn't do anything wrong with that halftime show.

"Up until then, the communities had done things representative of the community," he said. "It isn't that we failed in that but it's that the Super Bowl and NFL were always looking for opportunities to enhance the product and they showed they had great growth potential in the halftime show."

And that's why the following year the Super Bowl halftime show featured Michael Jackson, who ushered in the era of big-name big showy halftime shows that we know today.

Kick it again. The opening kickoff needed a do-over because the TV audience was still was seeing commercials. According to the Star Tribune, the referee announced in the Metrodome: "The ball was kicked before television released the game."

Hail to the future chief? As per usual with Super Bowls, the celebrities in attendance are of as much interest.

For this game, the biggest draw appeared to be Donald Trump and then-wife Marla Maples. The Star Tribune noted the couple was friendly and obliging with autographs as they headed to their seats.

"At halftime, rather than cause more concourse gridlock, Trump and Maples asked an usher to bring them four ice cream sundaes at $1.75 apiece. They gave the usher $30 and told her to keep the change. But the usher declined," the paper reported, without noting just how Minnesotan that was.

Bad Bills. This was the second of four straight Super Bowls the Buffalo Bills would lose. Four Super Bowl losses...can you imagine? At least for Vikings fans, their four weren't all in a row.