Maybe you can recognize any Led Zeppelin song within the first few seconds — but can you recognize the band themselves, in cartoon form, hiding in a crowd at the Pilton, Pop, Folk & Blues Festival circa 1970? If you, you're ready for The World's Greatest Music Festival Challenge, a Where's Waldo? picture book for music fans.

"Waldo," in this case, is the late BBC host John Peel, who can be found in every one of the book's 12 illustrations. You can also pore over every spread for a rubber boot, hidden by illustrator Jim Stoten "in case of rain." Beyond that, the faces to spot in each picture are those of musicians, organizers, journalists, and others associated with each event. Here are the dozen festivals featured in the book, and the years spotlighted:

While each two-page spread highlights a particular iconic moment in that festival's history, other notable artists associated with the event over a range of years show up in the pictures. For example, the Newport Folk illustration spotlights Bob Dylan "going electric," and his audience includes Pete Seeger (wielding an axe), Joan Baez, the Kingston Trio, Odetta, Muddy Waters, Johnny Cash, and Howlin' Wolf. Even the Beatles and the Stones, who never played Newport but were influenced by Dylan's performance, can be spotted.

At Reading, Nirvana are onstage blowing the crowd away. Onlookers include Pink Floyd, the Police, Public Enemy, and Arctic Monkeys. At Coachella, Daft Punk are playing their game-changing headlining set — while Pearl Jam, LCD Soundsystem, Madonna, and Radiohead look on. Woodstock should be the easiest challenge, except that all those long-haired hippie bands (Crosby, Stills, Nash & Young; the Who; Country Joe and the Fish) look the same.

You can first page through the book just enjoying the pictures and looking for the easiest faces to spot: for example, Leonard Cohen at Montreux or Stevie Wonder at Glastonbury. Then, you can read Matt Everitt's brief descriptions of each festival at the end of the book — with a key, so you can identify the artists depicted (although you still need to find them yourself).

The authors are British, hence the emphasis on their side of the pond: two-thirds of the festivals depicted are European. The book is an Anglophile music fan's delight, although the authors also delight in U.S. fests like Coachella (an event run "in the hugely efficient, highly profitable, and massively impressive way that Americans do so well") and SXSW. The latter is depicted with a Sixth Street panorama. Hey, there's Prince! And Pharrell in his Arby's hat! There's Barack Obama at a podium, and is that Buddy Holly in the Texas clouds? 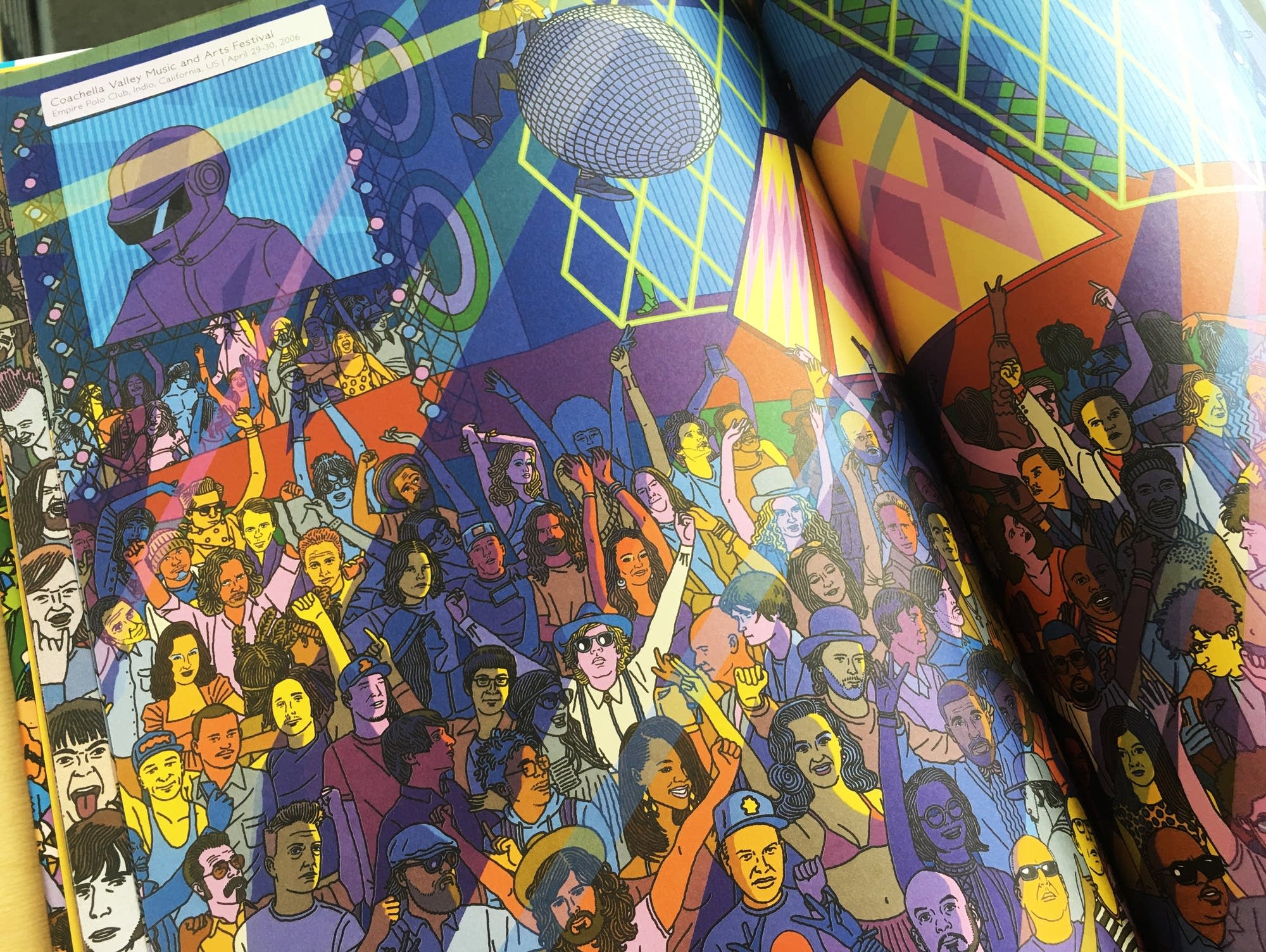 An illustration of Coachella, from 'The World's Greatest Music Festival Challenge.' (Jay Gabler/MPR)

At over 12"x9", The World's Greatest Music Festival Challenge is a fun addition to any music lover's coffee table, and kids will like it too. Don't worry: all the sex and drugs remain discreetly backstage.