There are a lot of questions to ask about the Rock Bottom Remainders, but let's start with this one: what's a remainder?

"Steve King should handle that," quipped Dave Barry, "because he's got so many of them."

"Those are the books that you find in the bookstore that say, 'Sale! 90% off,'" explained King. "Or, 'We will pay you!' A remainder is a leftover book. We started off to call ourselves just 'the Remainders,' I think, and we ran into a copyright problem because there's a group called the Remainders somewhere. So we became the Rock Bottom Remainders because we're good with adjectives."

Okay, now: what's a Rock Bottom Remainder? It's a member of one of the most unusual bands ever to sell out First Avenue, a supergroup of well-known authors. They only play occasional gigs, typically in association with literary festivals like the Loft Literary Center's inaugural Wordplay. The Remainders' show on Friday night also served as the kickoff party for that weekend-long festival.

Just as writers like to rock, rock stars like to read — and over the years, some of them have joined the Rock Bottom Remainders on stage.

"We played a number of gigs with Warren Zevon," remembered King. "Warren Zevon insisted that I sing 'Werewolves of London.' I did the best that I could, and Warren was just killing himself."

"Chain of Fools," King continued, was a song he could handle playing with Zevon because it can be played with only one chord. "Warren was onstage and we're playing up a storm, and he comes over and he says, 'Play it like Keith!' Are you crazy? I can't play it like Keith! He says, 'No, play like Keith!' And he gets down in this crouch. So I get down in a crouch too, and we played like Keith."

"Took 'em days to get back up," said Dave Barry.

"We played with Bruce Springsteen," remembered Dave Barry. "We only had one song left when he came onstage, which is 'Gloria,' which is a very simple song. My joke is that you can throw a guitar on the ground and it will play 'Gloria.' But I had to ask him, 'Bruce, do you know "Gloria"?' And he did. But we didn't let him in the band because he has not written a book."

"Now he has!" Karr pointed out. Springsteen isn't the only rocker who's tried his hand at writing. "Both Keith Richards and Patti Smith," said Karr, "did a great job. I like Bruce's book, too. Charlie Mingus is also great."

"I read the biography of Jerry Lee Lewis," remembered King, "and I read the biography of Eric Clapton. I was interested in both of those things because both of those people are incredible self-taught musicians. I thought, 'I want to read about how they learned to do what they do,' and neither one of them were able to address that issue. Clapton talked about seeing a guitar at a pawn shop, and he said, 'It hurt my fingers, but I learned to play clawhammer style.' And there's really nothing about harnessing the talent to the instrument.

"The best story, though," King continued, "is Jerry Lee: he's cousins with the Swaggarts. You know, the preacher. And they had a little more money than the Lewises did, and they lived up the road. The Swaggarts had a piano in their house, and in that biography, Jerry Lee says, 'I didn't even know what it was. I only knew I had to get at it.' And that's the mystery of talent."

"Louis Armstrong, in his book," said Blount, "told a story about a friend of his on a cruise boat. A fellow musician who was saving up money for some reason, and just starved himself. Didn't eat any food, put his per diem away. And the guy died! And [Armstrong] said, 'I may not ever get rich, but I will be a fat man.' That is my credo."

While they were coy about their planned Prince tribute (they covered "Kiss" as an encore), the Remainders did talk about "Surfin' Bird," the Minneapolis-made hit King sings.

"Since I'm the one who suggested this song seven years ago when we played in Los Angeles," explained King, "I actually had to listen to the record to count how many times the Trashmen say 'bird bird bird, the bird is the word.' But it's tough for me to remember all the lyrics."

Another Rock Bottom Remainders standby is Nancy Sinatra's "These Boots Are Made for Walkin'," delivered by Tan in S&M mode. The acclaimed novelist remembered going through airport security once on her way to a gig. When the TSA staffers opened Tan's bag, "They pulled out a police cap and then they pulled out some handcuffs and they're like, okay. And then they pulled out a whip, and they just shut the bag up."

The person who suggested Tan start playing that role was none other than the legendary Al Kooper, "Like a Rolling Stone" keyboardist. "This was by fax," remembered Tan. "He said, 'I see our little Amy wearing fishnet stockings and leather.' I said, 'That is the most sexist thing I've ever heard. Yeah, I'll do it.'"

Turow, one of the band's better singers, also wears some of their most outrageous stage costumes. He explained: "People always say, 'What do you do in the band?' I say, 'My specialty is shamelessness.'"

Like a lot of great bands (the Who are coming to Minnesota this fall, 37 years after their first "farewell tour"), the Rock Bottom Remainders have hung it up and come back. When founder Kathi Kamen Goldmark died in 2012, the band played a swan song on Craig Ferguson's Late Late Show. As it happened, they couldn't stay broken up for long.

"If you ever heard us try to end a song," said Dave Barry, "you know how difficult we find that to be. So ending the whole band turned out to be impossible."

"In a nod to Prince," added Turow, "we are the band formerly known as the Rock Bottom Remainders." 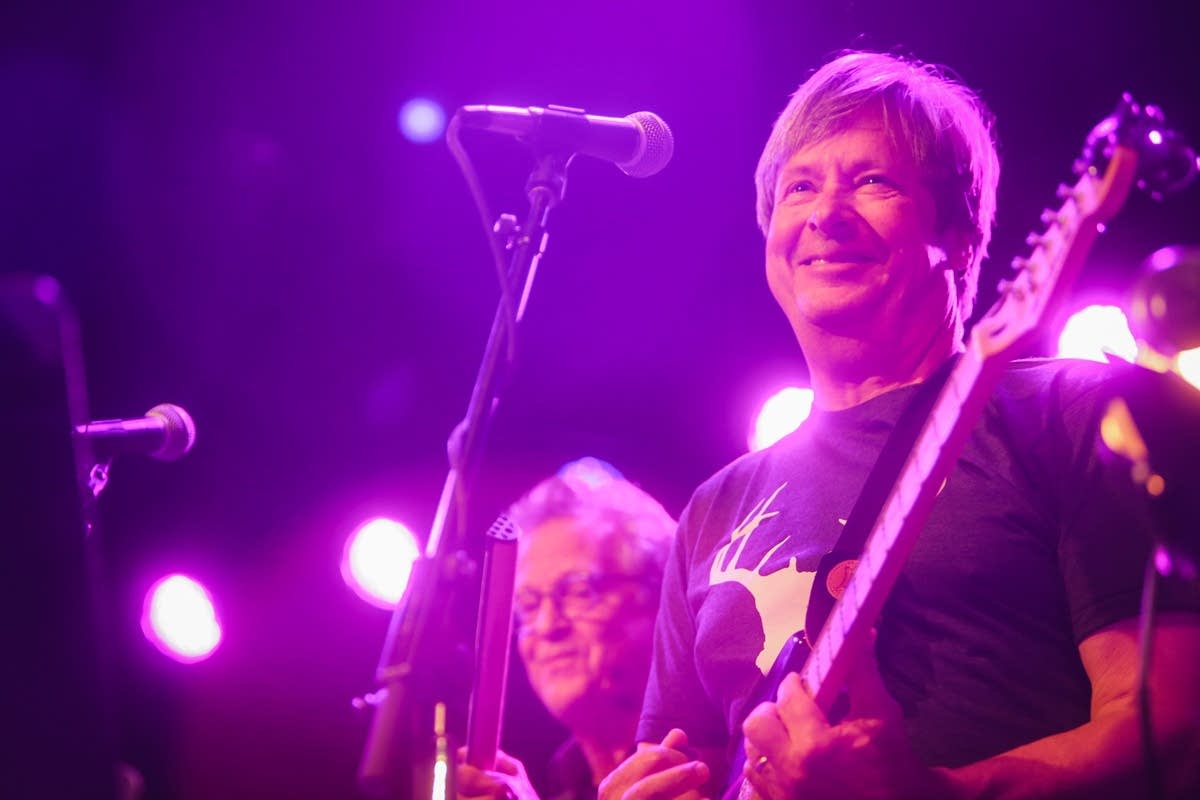 Ridley Pearson and Dave Barry perform with the Rock Bottom Remainders at First Avenue, May 2019. (Emmet Kowler for MPR)
Tweet