Most people know Soundset for its music — the festival draws tens of thousands of people to the Minnesota State Fairgrounds, and it has hosted big names like Lauryn Hill, Future, and Atmosphere. But the festival brings more than just music to the Twin Cities. Every year, skateboarders, painters, car enthusiasts, B-boys, and B-girls gather to celebrate hip-hop through sports, dancing, and art.

Steve Nesser owns Familia Skateshop, a Minneapolis-St. Paul skateboarding retail shop that organizes a Skateboard Showdown each year at Soundset. Nesser explained that even before Rhymesayers Entertainment founded Soundset in 2008, ties between music and skateboarding have run deep in the Twin Cities. Familia Skateshop opened its doors in 2005, with its Uptown location just blocks away from the Rhymesayers retail store Fifth Element, on Hennepin Avenue. 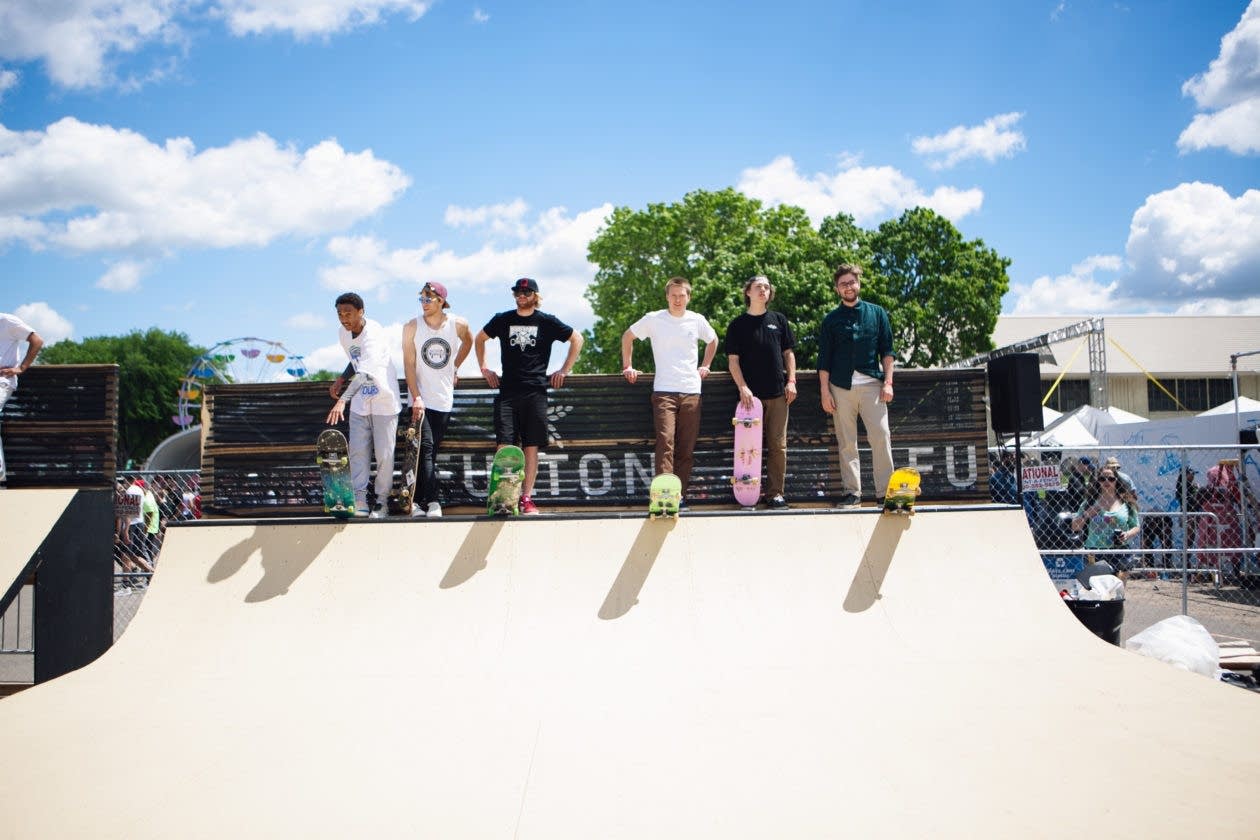 "Music and skateboarding go hand-in-hand," Nesser said. He had known members of Rhymesayers years before they asked him to put together a skateboarding showcase at Soundset, and says that there is "a lot of overlap" between musicians and skateboarders in the Twin Cities.

Wes Winship operates Burlesque of North America, a Minneapolis design company that specializes in screenprinting, graphic design, and event curation. The company now coordinates live painting at Soundset. Before founding Burlesque, in the '90s Winship was publishing a graffiti magazine and painting with Rhymesayers member and Soundset organizer Slug. 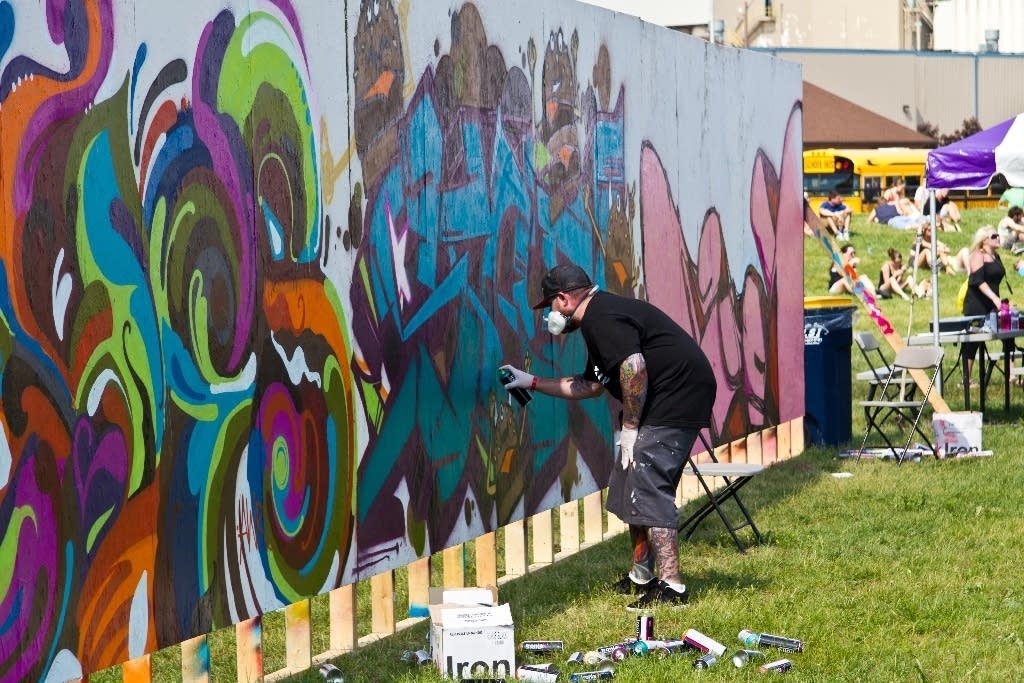 "I painted at the first Soundset, when that was actually an all-night rave that happened at Lake Street," said Winship. "I remember Slug's roommate was one of the guys doing the early artwork, and I collaborated with him a lot. I also painted graffiti with him. So I would be eating pizza over at Slug's house, running into him. It was a natural thing [...] to just start working with them and building." Around the same time, Winship began designing album covers and posters for Rhymesayers, so it seemed like a natural decision to incorporate visual art into the festival once it rolled around.

Nesser said that musicians and skateboarders have previously collaborated on events in the Twin Cities, "but nothing that has been completely local and done to the caliber that we like to do [at Soundset]."

So how does the festival bring dozens of skaters and painters together each year? 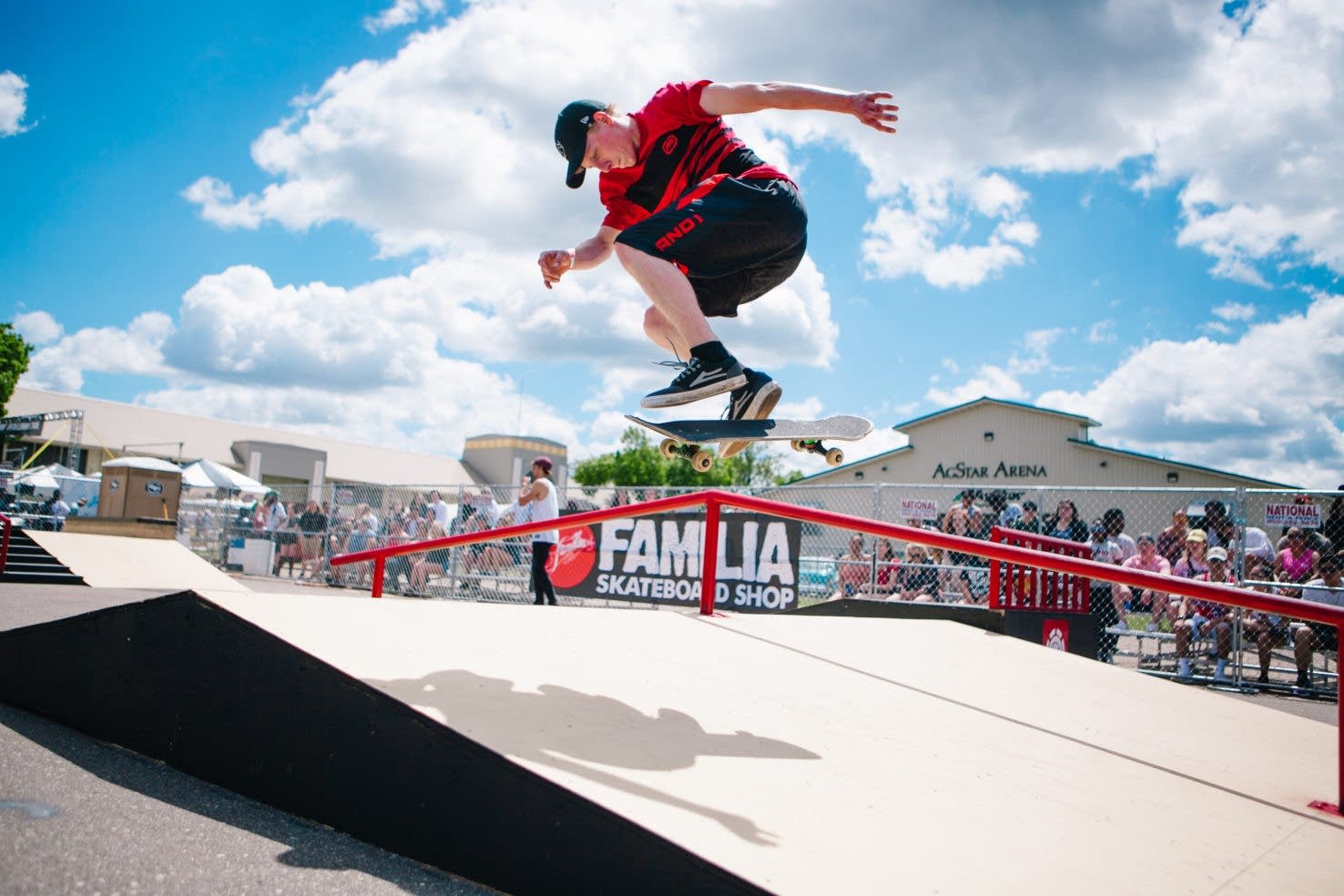 A skateboarder at the Soundset Skateboard Showdown in 2017. (Nancy Musinguzi for MPR)

Nesser says that some years, there are up to 50 people skating at Soundset. Skaters come from across the country to participate in the Soundset Skateboard Showdown, but "the majority of it is local." "The setup is basically a bunch of obstacles in a square, kind of on your way to the main stage," said Nesser. "It's a skate jam all day, and then we do a specific contest around 4:00 where we give away cash for tricks on an obstacle of the year."

This year, Soundset is bringing 15-20 painters to the festival. "I think it will be the [biggest] amount of people that has happened so far," said Winship. In past years, painters have stood along a long wall of plywood to paint, but this year the artists will be spread out to give more space for people to view their work from all angles. 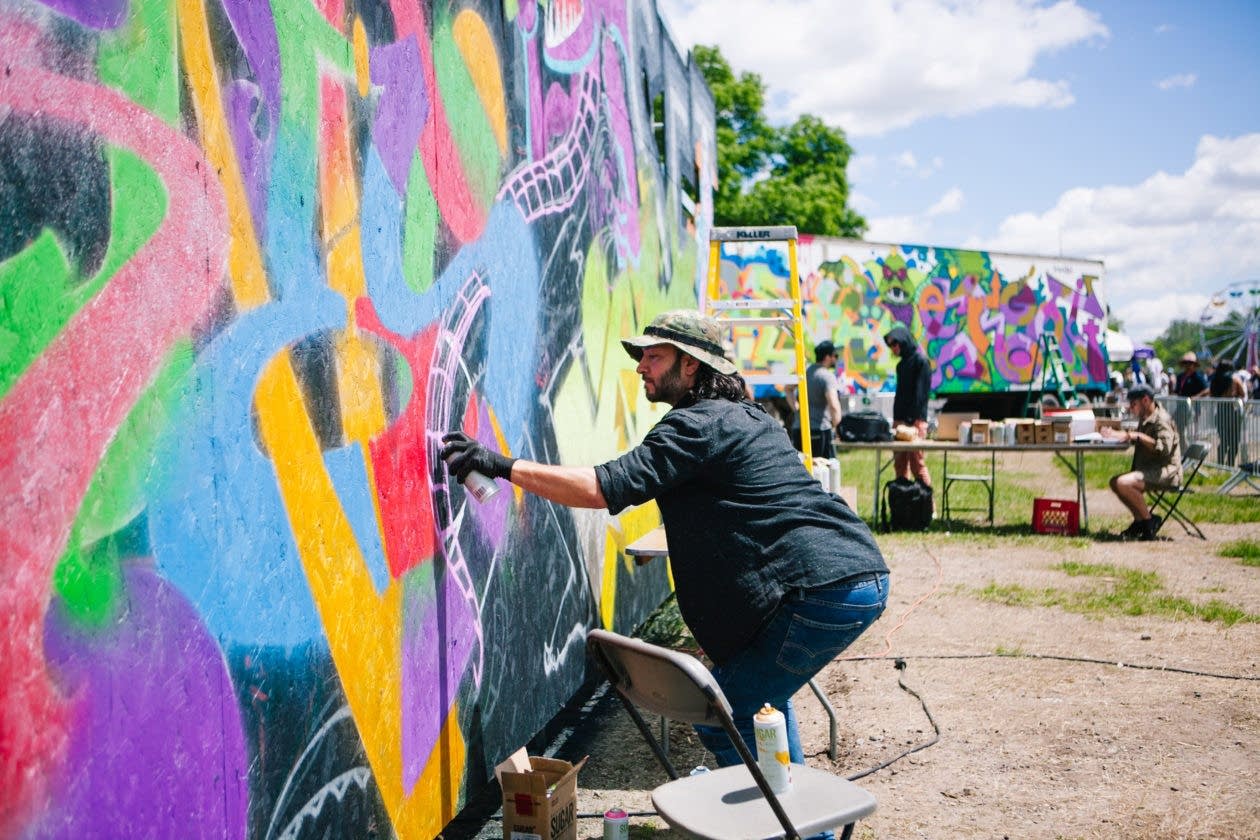 While each artist brings their own style to Soundset, Winship says that the live painting at the festival is "heavily steeped in the hip-hop graffiti background."

"Primarily, just to get stuff done in the short amount of time, spray paint is usually the go-to choice," he said. "But also just because it is a hip-hop festival, with those connections all the way back, the way that some of us were painting at Soundset when it was just a mere rave on Lake Street, I think the hip-hop and graffiti element has stayed with it."

Winship has painted at various years of Soundset, and says that working outdoors at a festival is "definitely different and challenging." "There are all of these people around, but usually your back is to them because you're focused on your work," he continued. "You make your decisions faster, and things become a little bit more fluid. The sound can also be energizing. It can also sometimes just be too much, and people have to put on headphones or earplugs for a while." 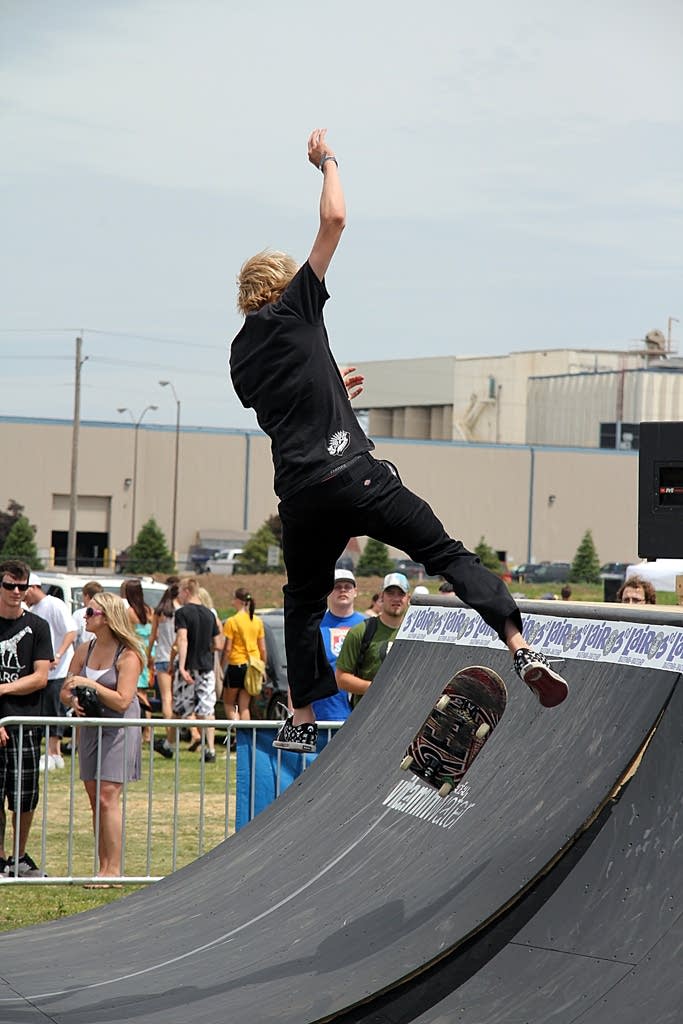 A skateboarder on a skate rink at Canterbury Park. (Eamon Coyne for MPR)

Each year, Nesser and Winship are thinking of ways to expand their showcases. For the four years that Soundset took place at Shakopee's Canterbury Park, Familia had to set up their skateboarding showcase on grass. Now at the State Fairgrounds, skateboarders have more space — and pavement — to build more elaborate courses. "The setups keep getting better every year, so it's definitely going to keep growing," said Nesser.

In addition to painting on wood boards, this year artists will get the chance to paint on two delivery trucks from a local business. After the festival, the business' logo will be applied, and then will drive around the completing deliveries and rolling the artists' work around the Twin Cities. 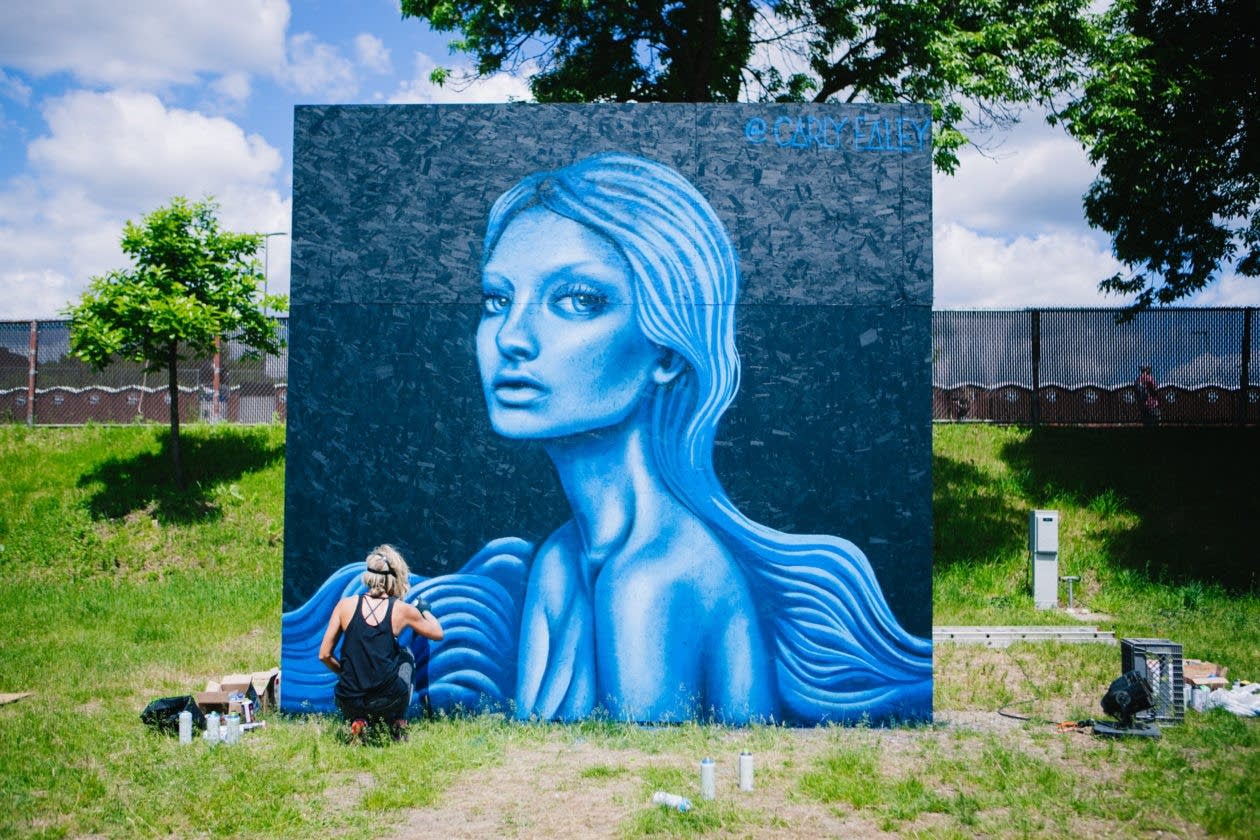 Painting in progress at Soundset 2017 (Nancy Musinguzi for MPR)

Another way that Soundset highlights artists' work is by reusing previous years' paintings as partitions to guide visitors around the festival. "Rhymesayers decided to reuse these walls, which are essentially plywood structures, around all of Soundset," said Winship. "Instead of having black fences, they're coated with all of the artwork from years past. It makes it a giant gallery."

From painted partitions to skating competitions, Soundset creates a unique blend of experiences. Nesser, who skateboards professionally, has skated at every year of Soundset's Skateboarding Showdown. "You're skating outside, listening to music, and people are hanging out," he said. "It's a good time."

This story is a bonus feature of The Current Rewind, a brand-new podcast putting music's unsung stories on the map.