When you think of combining a rock band with an orchestra, the hard-strumming the Who might not be the first group that comes to mind. But that's exactly what's happening as the legendary British rockers bring their Moving On tour Friday night to St. Paul — and then on to 15 other North American cities over the next few months.

"This is not just like the Who and some strings," says conductor Keith Levenson, who leads the tour's 48-piece orchestra each night. "These charts are really deeply written, and the orchestra is treated like one big instrument along with all the other rock instruments."

This is the second part of the Who's orchestral tour. The first leg visited a dozen U.S. cities in May, followed by a July gig at London's Wembley Stadium.

"What's been great is how well both casual fans and real purists, who are very vocal, have accepted it as the next thing," Levenson says. "I think the tour is actually aptly named Moving On, because it's a big step from what the band has done before and it requires a lot of discipline."

Symphonic tours are nothing new to Roger Daltrey. The Who's microphone-swinging singer has worked regularly with Levenson over the past 25 years, including 2018 concerts for the band's landmark Tommy album and other stage projects such as the British Rock Symphony and The Wizard of Oz, in which Daltrey played the Tin Man.

Although doing an entire symphonic tour with the Who might be new territory for Pete Townshend, the guitarist is no stranger to orchestral music. He worked extensively with his father-in-law, British composer Edwin Astley, on various solo projects — including the hilarious tune "Football Fugue," which compares the orchestra musicians to football hooligans, and the achingly beautiful "Brooklyn Kids," both released on Another Scoop. He has gone on to do a variety of orchestral projects involving his solo and Who material.

Townshend cites many classical influences, including Henry Purcell and William Walton, and has professed an admiration for film scores. Of course, he also has written a few rock operas, Tommy and Quadrophenia, the latter inspired by Benjamin Britten's Billy Budd.

Both albums figure prominently on the band's orchestral tour, naturally, along with the usual smattering of greatest hits. They include the epic "Baba O'Riley" (aka "Teenage Wasteland"), with its iconic violin solo. Played on the band's original recording by Dave Arbus, the feature is handled on the tour by virtuoso Katie Jacoby, another of Daltrey's previous collaborators.

"It's the greatest violin feature in all of rock 'n' roll, and it is beyond an honor to be trusted with the responsibility of playing it every night," she says. "Playing 'Baba O'Riley' is such a fierce and incredible moment, and it's definitely my favorite, but there are so many other parts in the show that are goosebump-inducing to perform. 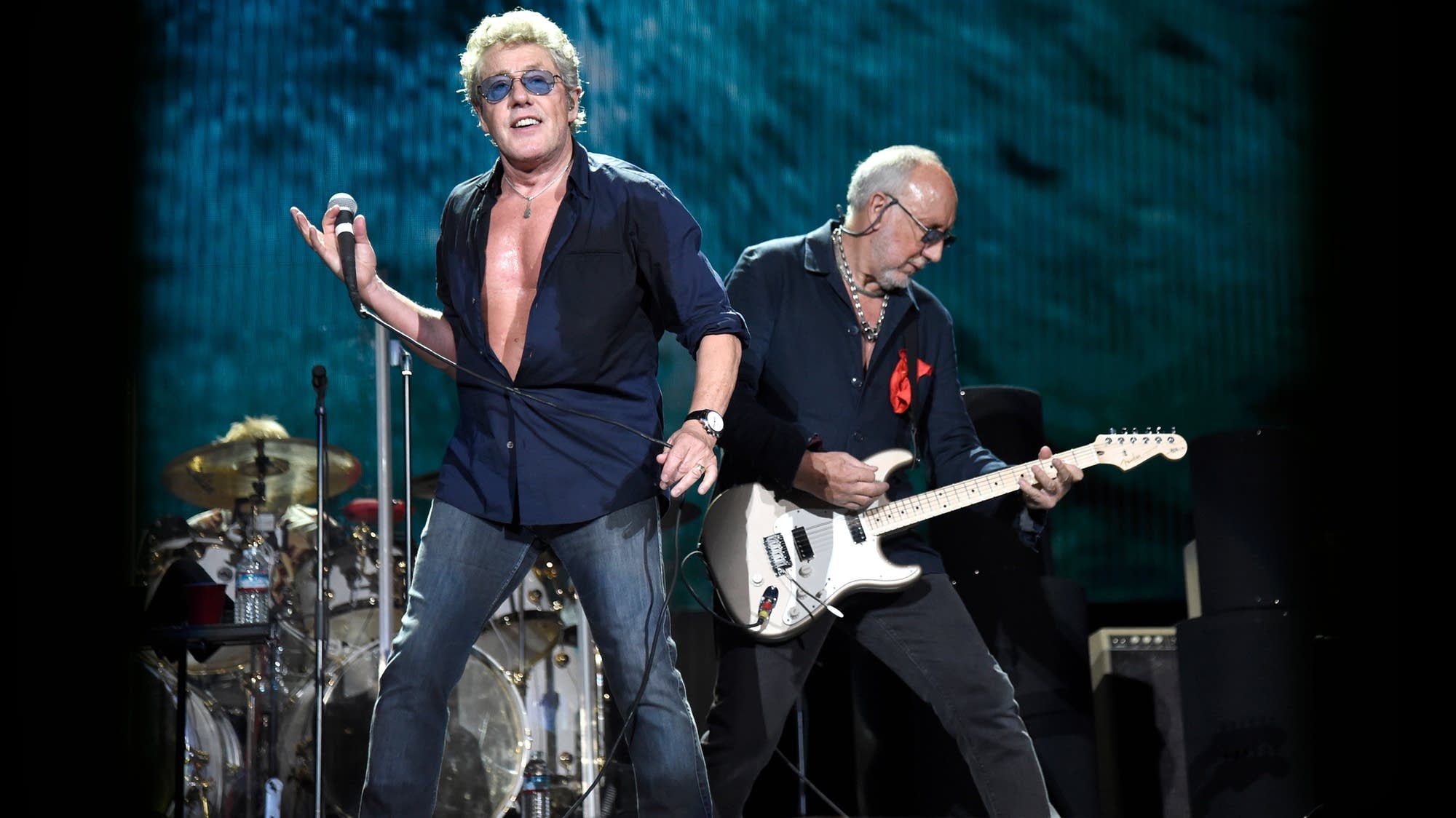 Singer Roger Daltrey and guitarist Pete Townshend are the Who, the legendary British rock band that started in 1964. (Courtesy of the artist)

"When an arena full of folks is singing along to every word of 'Behind Blue Eyes' while waving their lighters and cellphones in the air, it's the most moving thing. The melody of that tune is so hauntingly gorgeous, and the lyrics carry so much meaning for so many different people. It's really emotional to have a part in performing the Who's music every night."

But while Jacoby relishes contributing to the soul of the Who's classic tunes, she will be tempering her attempts to mimic their on-stage theatrics — namely Townshend's trademark windmill guitar-playing technique.

"When I found out I got the gig with the Who after being on tour with Roger Daltrey, I was naturally very excited and immediately tried doing windmills with my violin and bow," she explains. "We'll just say that there was a little blood and that I won't be trying that again anytime soon, especially since Pete Townshend, master of the windmills, has it covered."

Moving On is a symphonic tour, but there isn't actually a traveling orchestra. The performers are assembled at each stop from area orchestras and the professional music community.

What's it like to create an instant orchestra on a near-daily basis?

"It's hell," Levenson deadpans. "We've had really great orchestras, but it's hard."

The logistics are daunting. In each city, the conductor gathers the musicians and rehearses for two hours in the afternoon. Then the band comes in for a 20- to 30-minute sound check. Then they all play together for 30 to 45 minutes to work out any musical and acoustic issues. Then there's time off for dinner. And then it's showtime.

But union rules stipulate that the orchestra musicians must get a break during the concert. So the band goes it alone on a five-song set in the middle of the show, and the orchestra plays on nine to 10 songs on each end, including a few new songs from the Who's upcoming, yet-to-be-titled album.

One thing that Levenson has deduced from the orchestral tour is that fans of the Who and lovers of classical music aren't really that different these days.

"We are the new classical age, because people in their 80s aren't buying tickets," says the conductor, who's 59. "We see some young people at the concerts, but I would say the bulk of our audience is probably 45 to 70 — and they may not want to hear The Nutcracker again."

But they most certainly do want to hear the Who, complemented by David Campbell's orchestral arrangements, Jacoby says.

"The music of the Who is rock 'n' roll at its core," she says, "but I'm continually surprised by subtle moments and lines that are expertly woven into the riffs and melodies that everybody knows and loves. Sometimes there are moments in the music that echo a regal Tchaikovsky march, or the churning sequences of Terry Riley and Steve Reich. But then there's a ton of … fiddle slides. And then power chords. Plenty of power chords, of course!"