In 1986, when Prince wrote the track "Sign O' the Times," it felt like the world was on fire. The AIDS epidemic was raging, President Ronald Reagan was rattling sabers with the Soviet Union, and in Minneapolis, the murder trial of a teen potentially killed at the hands of a gang known as the Disciples was ongoing. Prince had also just experienced a literal earthquake in California.

The Sign O' The Times remastered Super Deluxe Edition is dropping today. Most of the eight-CD collection was recorded from the end of 1985 to the beginning of 1987, a time for Prince that was incredibly prolific, experimental, and transformative. Over the course of this year and a half, Prince put together and scrapped three albums: Dream Factory, Camille, and Crystal Ball. All three of these albums were essential in getting to Sign O' The Times, released on March 30, 1987.

The first album, Dream Factory, was recorded between March and July of 1986. Prince created and recorded the double album with his band The Revolution, working in close collaboration with the musical duo Wendy & Lisa, a.k.a. Wendy Melvoin and Lisa Coleman. Due in part to a desire from Prince to go in a different creative direction as well as strained relationships with the band, Prince disbanded the Revolution shortly after the group's European tour in the summer of 1986 and dropped the album as a result. He would take eight songs off of Dream Factory and ultimately put them on Sign O' The Times.

Concurrent with Dream Factory, in mid-1986 Prince was developing his feminine alter ego of Camille and creating a solo album around her, Camille. Prince had played with shifting his own high register even higher electronically, and based Camille around this androgynous, pitch-shifted sound and style. He had intended to release the album without any allusion to his own identity, and it's assumed that Warner Records felt iffy about releasing a record without Prince's name or image attached to it. The project was dropped, with three songs off of it eventually making their way to Sign O' The Times.

Put together in late-1986, Crystal Ball was ambitious. Prince added new material along with eight songs from Dream Factory to craft the three LP album. Warner believed the hefty project wouldn't perform well and requested it be pared down. It's worth distinguishing this unreleased album from Prince's 1998 compilation, also called Crystal Ball, of unreleased songs from his over-flowing vault. 15 of the 1986 Crystal Ball's 22 tracks ended up on the 16-track Sign O' The Times, with "U Got the Look" as a new addition to the final product.

Prince didn't like the word "experiment." To him, it implied creating something left to be unfinished. Though Dream Factory, Camille, and Crystal Ball remained unreleased, the work Prince and his collaborators did on them, the months of tinkering and playing with these tracks, culminated in the album that many regard as his greatest artistic achievement. They weren't wasted then and they are certainly not wasted now. 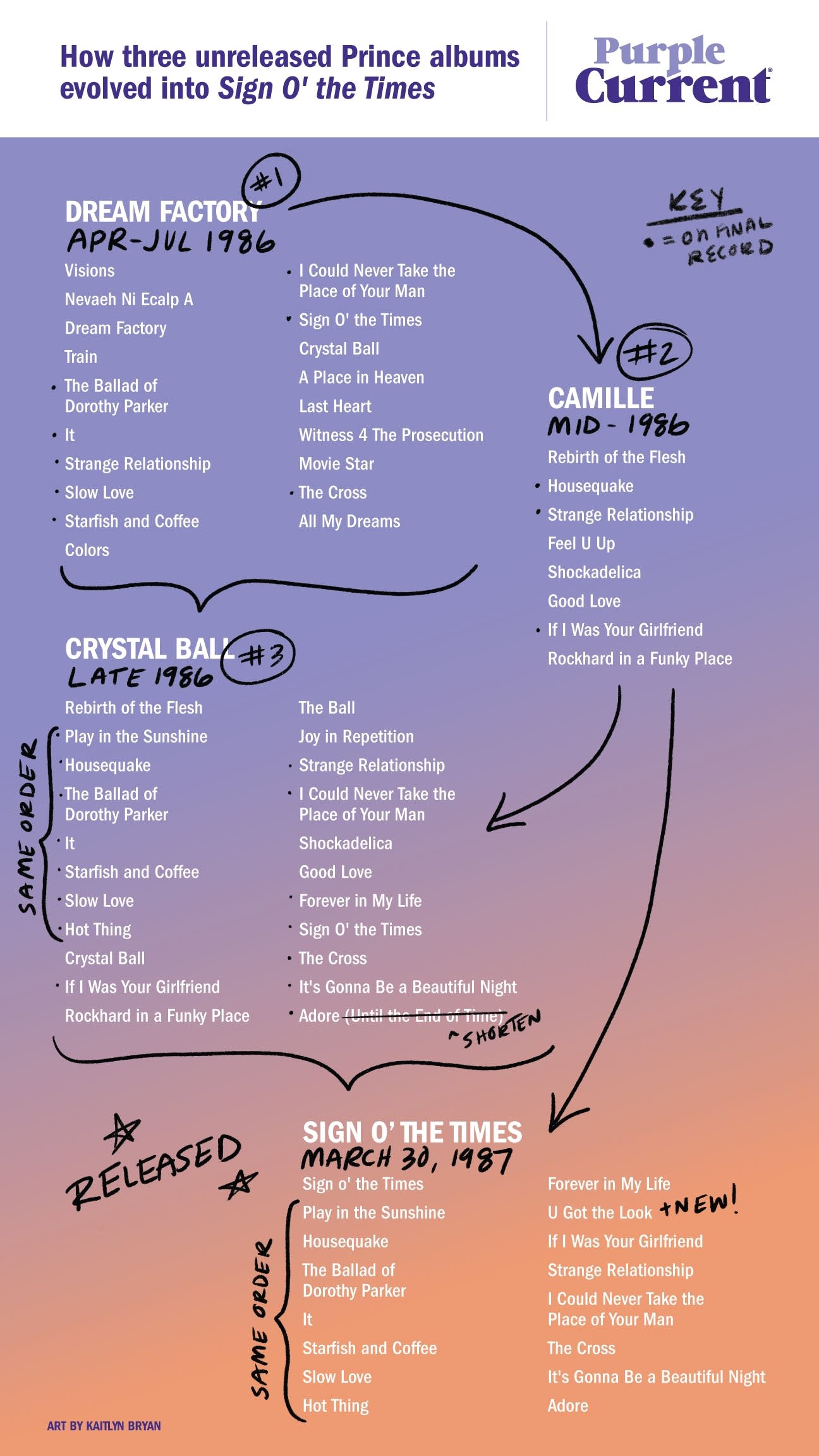 The evolution of 'Sign O' the Times.' (Kaitlyn Bryan for MPR)

Above, see Kaitlyn Bryan’s infographic charting how the album evolved (click here for high-res); and below, listen to playlists that now — with the release of the new Vault material — for the first time ever give us the opportunity to track Prince's progress through this fertile period. For more on how Sign O' The Times came to be, listen to the audio documentary series Prince: The Story of Sign O' the Times, brought to you by The Current in collaboration with the Prince Estate, Paisley Park, and Warner Records.