Frances Forever joins The Current to play a few tracks and talk about balancing their senior year of college with a record label signing, their philosophy of recording cover songs, and which instruments they want to learn next.

JADE: Hey it's Jade joining you for another one of The Current's virtual sessions and today we're joined by Francis Forever. We have been loving playing "Space Girl". It's a song that went viral--it's a huge sensation right now but let's check in with Francis, how are you? How is life?

FRANCES FOREVER: I'm doing good. I'm a senior in college right now so balancing music and school has been interesting. But yeah, it's been fun. It's been a wild ride.

That is kind of wild to try and balance those things. It's so interesting to me, because so many artists, so many musicians that I talk to are dealing with the comedown of being on tour constantly, having that life on the road, and then the pandemic hit and that cut everything off immediately. They went home and suddenly found themselves with a lot more time to spend with family, but also to sit and kind of reflect on their career, and where they want it to go. It almost seems like you can come at it in a different way because you've been in school, but how has the pandemic sort of changed things up for you?

Yeah, this couple months have been a whirlwind. It's been nice to do everything from my apartment, because I imagined it would be traveling a bunch, if I was in non-pandemic world, getting signed to a label and having all this stuff happen. I am a little disappointed that I have to wait a while to go touring, because that's what I'm really looking forward to. But it'll happen eventually. It's been almost nice to have that--being able to finish school while everything's kind of settled down a little bit.

I should say, congratulations, you did get signed to Mom + Pop, which is huge. What a big deal. But there's also that idea of, you were an independent musician releasing music on your own, sort of doing it at your own timeframe and timescale. Now you've got a label, they're gonna be sort of figuring all that stuff out for you. So is that something good? Is that welcome? Or are you more of a control person and you want to be on top of that stuff?

Yeah, I love having deadlines. As someone with ADHD, time management is not my strong suit. It's definitely nice to have somebody pushing me prodding me in the right direction. But with Mom + Pop, they've been really open to me having a lot of the creative control and me having a lot of the timing control. If I do need to spend more time on stuff, then they're willing to not burn me out like bigger labels would. So that's definitely a nice thing of being signed to a smaller indie labels that they really care for their artists individually.

And that's just kind of nice to have somebody looking out for you and taking care of you.

We've got this cover that we're going to listen to a little bit later. I was wondering--so many artists in this past year have recorded covers, and maybe that's just to push yourself out of your normal zone of songwriting and try something completely different? Or maybe it's nostalgia. But do you have a philosophy behind covers?

Yeah, I used to have a cover channel on YouTube. What I sort of figured out was that the best thing to do is to make the cover as different from the original as possible and more like your own style of music. That's what I enjoy the most is taking a song that I love and changing some melodies or changing what the instrument is that I'm playing and making it sound a little different. That's what I like to do. Especially with "Build Me Up Buttercup". I've been playing that for years. I feel like I've definitely made that my own sound on my own version of it. I really love that song.

It's such a good sing along song. Just bring all the people together. Well, I'm looking forward to that. But let's go back to the beginning. Let's get to know you. Do you do you come from a musical family? What's your background?

Yeah, as long as I can remember have been surrounded by music. My parents--my dad actually collects instruments around the world. So when I was little, he'd be like playing bagpipes around the house. He's definitely like a music theory junkie and would teach me a bunch of stuff. I've been taking piano lessons since I was six or seven and was in children's choirs for a really long time. So I've definitely grown up with music all around me, and it's sort of like a language that I've kind of become fluent in. It's definitely a huge comfort in my life.

Yeah, that'd be beautiful. I also just love that your dad's going around places and he's like, "What instrument am I going to get?" What's the weirdest instrument that your dad has collected?

Oh, I don't know if this is the weirdest one. But right now he's playing the oud. I think it's a--

...Turkish instrument, maybe? I don't know, I don't want to get that wrong, but it's kind of like pear shaped a little bit. And then it has the same strings as like, the same number of strings as a guitar, but like, every string is doubled. So it sounds more full, Iand I think it was one of the first stringed instruments ever. But it's really cool. It's a sick instrument.

I love that. So are you just dabbling in all the instruments all the time?

I don't have as many, I have a ukulele guitar. I played drums for a hot second, like for a year. Then I sold my drum set to get an electric guitar. And of course, piano and I actually bought something called a "guitalele" which is like a ukulele but with six strings. So it's a little different. Yeah, I like to find stuff.

That's awesome. So now are you going to keep your dad's legacy going? Just wherever you go, just pick up whatever instrument looks strange and intriguing.

Yeah, I've kind of been wanting to get into like, the saxophone or the trumpet. I feel like that's the sort of class of instruments I haven't touched at all. I think that would be really fun to learn how to do.

I'm a sucker--if there's any horn on any song, I instantly am already in love with it. No pressure, but that's a fantastic move. Is there a band or is there an artist that when you were younger, you know, surrounded by music, but you saw someone and you said, "Oh, that's just that's what I should be doing. That could be me."

Yeah, I've always been really inspired by Taylor Swift. She's on my wall over here. The image is mirrored, so I keep pointing the wrong way. But yeah, she's an incredible songwriter. She was the person to get me into, "Oh, I can also write songs." I think the first time I saw a band live, I think it was one of my first concerts too, where I was just super blown away was Paramore. I was all the way up in the nosebleeds and I still sort of like taken away and I was like, I want to do that. I want to be on the stage. It looks really fun and amazing. Yeah.

Since you're looking forward to that big stage show, have you been practicing? Do you have your like Haley Paramore vibe that you're going to be busting out as soon as we can see you live on stage?

I'm working on it--haven't quite I think, stage presence is something that I definitely have to work on. Before the pandemic, I was just playing basement shows, which are very cramped. Not a lot of room to wiggle and dance around. I would also always be playing the keyboard while I was playing music with my band. But yeah, for tour I definitely want to just take the mic off the stand and run around the stage. Yeah, I have some bangers comin'. I can't wait to play them onstage. It's gonna be really fun.

I'm so desperate for a live show that I am just waiting for everyone to get back on tour so we can all go and you can dance on stage. I can dance in the audience. We can all have a lovely time.

Oh, I have a virtual show actually, on March 25. We're opening for Peach Pit on Bandsintown. So that'll be a fun show. I'm playing with an actual band so it'll be not quite the same.

So we get a tease.

Yeah. Without an audience.

Well, you mentioned that you've got some some bangers on the way and I read in an interview that you like sad songs, but you'd like them to sound happy. Kind of like the sad bangers and--I also enjoy dancing while crying. That's the ultimate if a song can do that. So I was curious what your ultimate sad banger is--what do you put on when you need to cry but you also need to dance it out?

Ooh, that's a good one. I feel like Caroline Polachek, "So Hot You're Hurting My Feelings" is my sad banger because you can dance to it and you can also just be like, [sings] "Cry on the dance floor." Yeah. 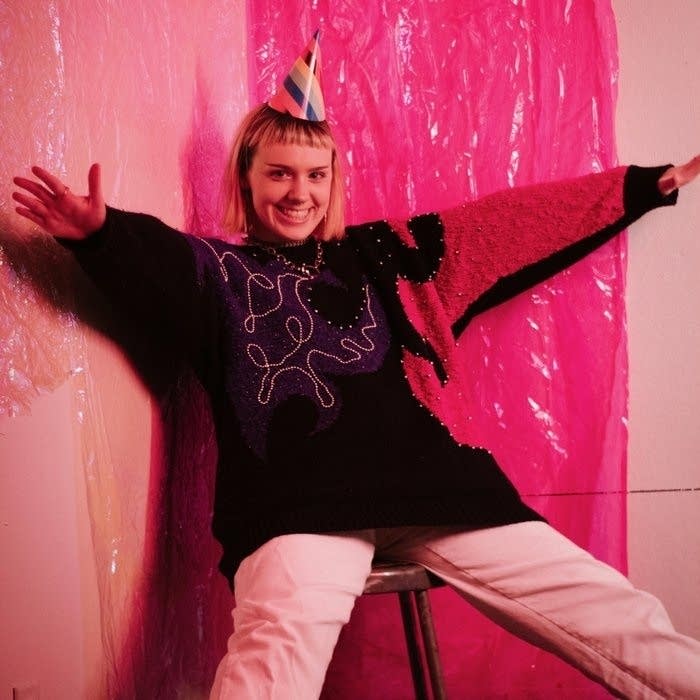 Perfect choice. So we do have some recorded songs that you can enjoy, part of The Current's virtual session. One of those is is your big hit, the virtual--the viral sensation, I should say, "Space Girl". I've been playing it, loving it. But I was talking with a friend the other day because there's lots of talk about space and Mars, and I want to know, if you could have the choice, and somebody offered you the opportunity to go to space, would you?

So space actually terrifies me. I think it's just--yeah, I don't know, just watching movies about space and learning about what happens in space just kind of makes me very scared. But I think--

I feel you, I would be the girl that they would send to try and fix something and I'd be like, "Guys, I'm inexperienced. I don't really know where where the things are." And they'd be like, "Oh, just go out there. It's easy. And then a meteor would come and I'm lost." That's what I picture.

That's why we can have lovely songs about space and intergalactic love.

Well, thank you so much for making some time Francis and for chatting with us. I just wish you the best of luck with the rest of the school year and we look forward to hearing some more new music from you.

Yeah, thank you so much for having me. It's been a pleasure.