"I don't want this book to feel like a chore," writes Billie Eilish at the beginning of her new book. Given the devotion of her millions of fans, Eilish could write Ulysses II and get no complaints about anyone feeling burdened by a chore.

That said, paging through Billie Eilish is certainly anything but a chore. The 344-page photo book is a visual chronicle of the 19-year-old singer-songwriter's 21st century life, which transitions rapidly from Kodak snapshots to cell phone photos and professional portraits.

Except for a handful of selfies, most of the photos are of course not taken by Eilish, but her authorship of the book is nonetheless significant: one of the hallmarks of her meteoric career has been a determination to maintain control over both music and visuals. She directs her own videos, she sets her own style, and you're damn right she's going to pick her own pictures.

Chronologically, the first photo in Billie Eilish has her older brother Finneas smashing his face into their mother's pregnant belly. Family has been another hallmark of Eilish's life; she collaborates with Finneas so closely that they make most of their music at home in his bedroom. (Photos in the book do capture one early visit to a recording studio, and one occasion when they worked on music in an airport departure lounge.) In one photo, Finneas and an infant Billie have fallen asleep holding hands. 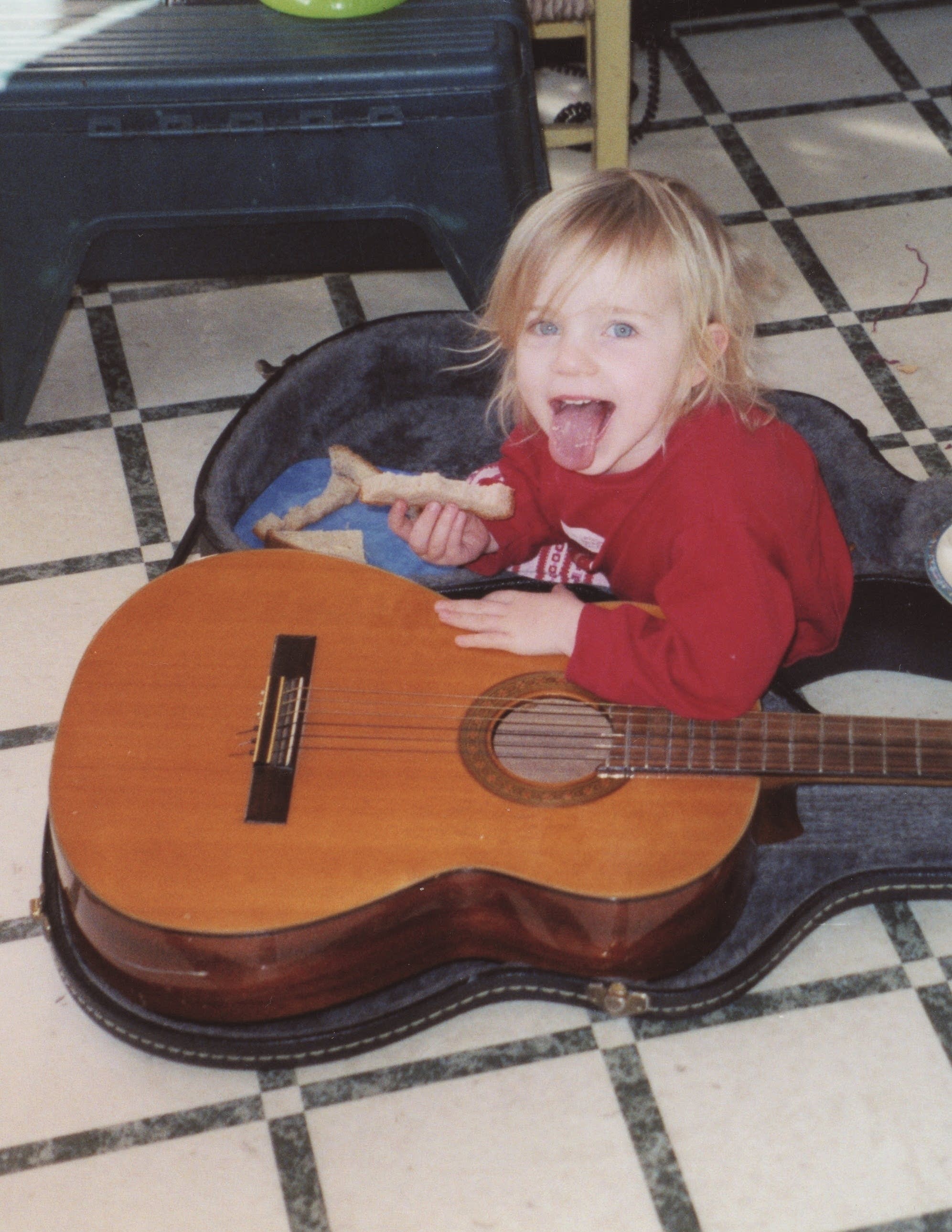 From the outset, Eilish is recognizable by her striking blue eyes and impish sense of humor. She's often playing an instrument or, even more commonly, grasping a microphone; you can see where her parents couldn't have doubted this kid was born to entertain. ("Always reaching for any mic," she writes in one of the book's occasional captions.) Any of these shots could have served as debut album covers. I'm especially partial to a photo of Eilish passed out in her highchair, another where she's looking bored in a Teletubbies sweatshirt and skewed bucket hat, and another where she's sobbing over an elaborate unicorn birthday cake.

By age six, Eilish was onstage. In her first talent show, she performed "Happiness is a Warm Gun" in a pink skirt while her dad accompanied her on keys. Yep, the O'Connells are a bit of an unusual family...but her parents, as depicted in the engrossing documentary The World's a Little Blurry, are gratifyingly grounded. Their affectionate support is documented here as well, along with their tween daughter's Justin Bieber obsession. One of the particular gems is a photoshopped image that seems to have Bieber and Eilish holding hands; the only giveaway that it's a fake (crafted by the future star herself) is the fact that the two are standing in front of completely different backgrounds.

There are just a few glimpses of Eilish's pre-fame teen life — workouts on the silks ("my mama is incredible at it still"), choir performances ("Can you spot the only person not in uniform? Aka an enormous yellow sweatshirt"), a dance rehearsal. Then she's recording her breakout track "Ocean Eyes" and wham bam thank you ma'am it's off on tour with Finneas and their mom ("and sometimes our manager"). She hardly has the opportunity to enjoy her first mosh pit before she's signing a record deal and creating mosh pits of her own. 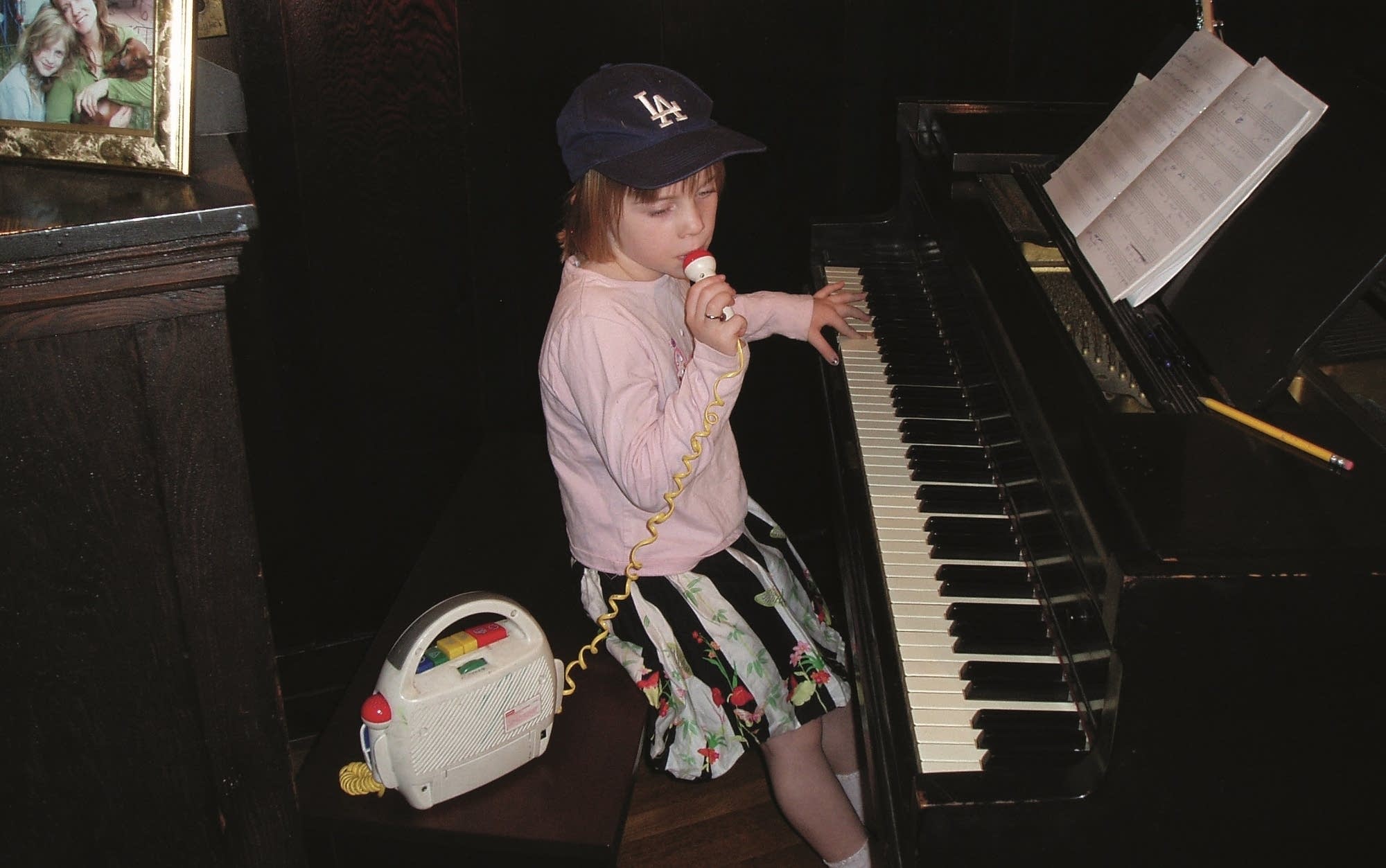 'Always reaching for any mic,' writes Billie Eilish in her self-titled book. (courtesy the family of Billie Eilish via Grand Central Publishing)

From this point on, a number of the photos are studio portraits and professional stage shots; it didn't take long for Eilish to become a huge star. The camera also turns on her fans, including the first fan to ever wait outside a venue ("She was precious," Eilish writes about the girl near her own age) and "some OG fans" who got to support their favorite artist lying in their human pile. Like Eilish, the fans always have their phones out.

Soon, Eilish suffers the first of several painful ankle and leg injuries; her high-energy live shows take a toll on her growing body. Many pages in Billie Eilish show the star on crutches, in a leg brace, standing in buckets of ice water (she made her opener Denzel Curry ice down along with her, but she writes that he bailed after just a couple of minutes), or otherwise being treated for injuries.

Life as a pop star isn't all bad, though. Eilish is also pictured at age 16 collaborating with legendary Japanese artist Takashi Murakami; sobbing over the car she got for her 17th birthday (presented after an 11-hour photo shoot that included her debut album cover); posing with her own billboards (though her parents seemingly enjoyed them more than she did); and kissing puppies (she likes to use her shows to find homes for rescue dogs).

It can't be easy being Billie Eilish, but Billie Eilish sure makes it look like fun: a private birthday party with a dance floor featuring your own personal log pattern, a hug from Hans Zimmer while recording a James Bond theme, and fans holding signs with slogans like WE'RE HERE FOR YOU. Of course, what's not fun is having an epic tour cancelled due to COVID...but that's nothing Eilish dwells on, nor does she share any photos of her quarantined life, which presumably included the recording of her forthcoming sophomore album.

"I adopted a little stinky puppy named shark," she writes. That's all you need to know.

May 20: The World of Bob Dylan, ed. Sean Latham

May 27: Butterflies and Tall Bikes by Jamie Schumacher