A black leather jacket worn by Chris Osgood on tour with his band Suicide Commandos in the '70s has joined the collection of the Smithsonian's National Museum of American History — along with a guitar pick.

John W. Troutman, the museum's curator of American music, said in a statement that the objects "peak evocatively to the establishment of a global aesthetic of punk, established in a synergy of local scenes and community movements, from the Twin Cities to New York City and London." As the museum notes, the jacket joins Prince's yellow Cloud guitar in the Smithsonian archives.

In a statement, Osgood said:

It is thrilling that one of our Commando Punk Rock Perfecto Motorcycle leather jackets is to assume a place in this collection of Americana, somewhere between Minnie Pearl's hat, Patsy Cline's stage outfit and John Wayne's hairpiece. Those jackets became an instant uniform of the Punk Band thing around he time we began touring in earnest after Make a Record was released on Blank Records/Phonogram in January 1978. That particular jacket has been around North America on the Co-Ed Jail Tour with Blank label-mates Pere Ubu and many other Commando forays by ourselves and with other bands. it went around Europe for a few months when I was sleeping on the trains with my post-student Eurail Pass, and was outside of me when I was inside the Pyramid of the Sphinx (Khafre's Pyramid) when I was poking around in North Africa. I am happy that the National Museum of American History can be the jacket's new home. It is seriously groovy to be able to represent the development of Punk Rock, our generation of MN Rock n' Roll musicians; AND the diversity of our own ever-evolving MN Music Scene — in the Smithsonian — Yay!

Shortly after the donation was announced, The Current's Jill Riley spoke with Osgood. Listen to their conversation above, and read an edited transcript below. 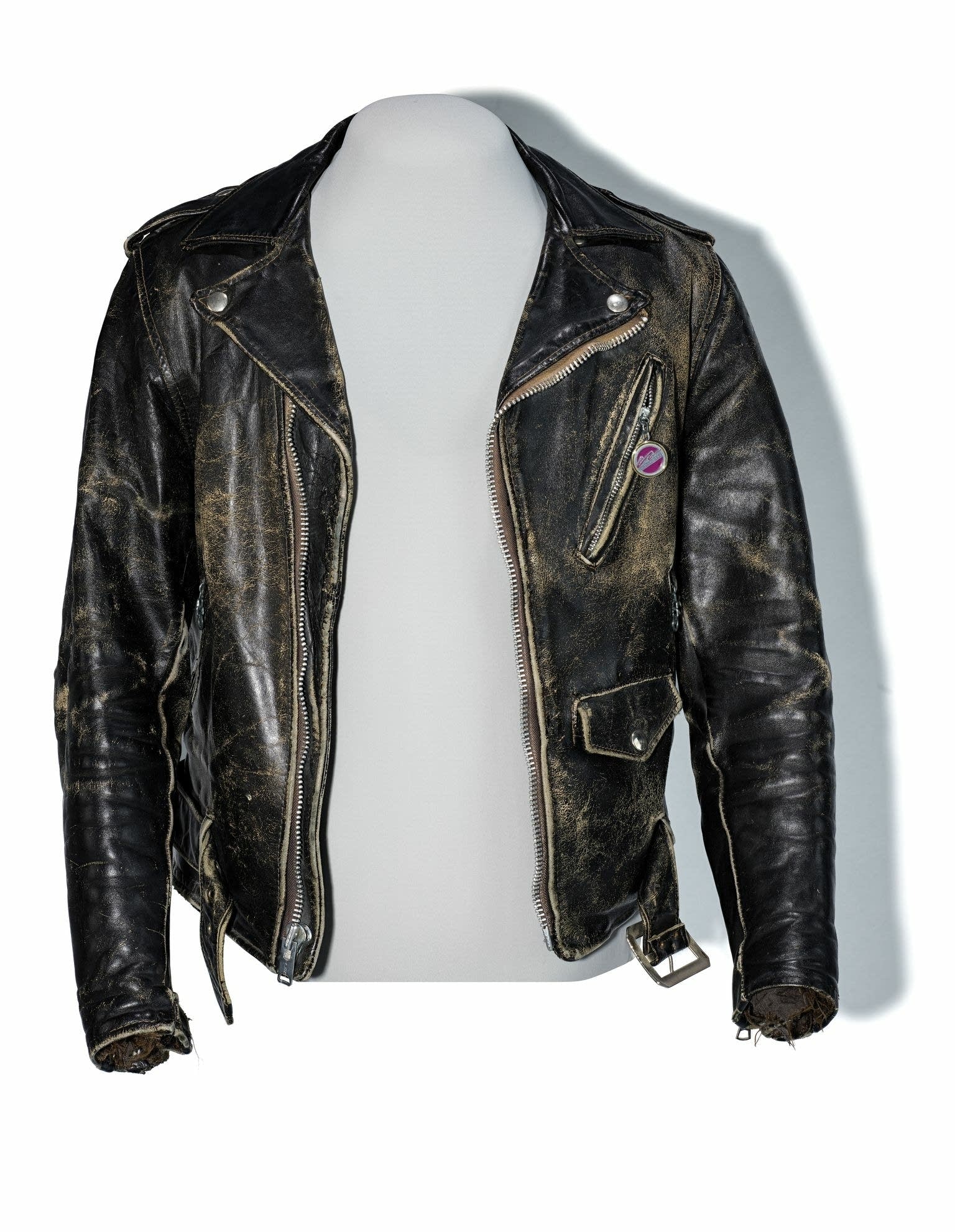 Jill Riley: Take me back to the beginning. How did you get involved with this?

Chris Osgood: Oh, well, let me start by saying that when you donate objects to the Smithsonian, it's not like donating objects to Arc of Hennepin County or Goodwill. There's more to it than that. First of all, they have to ask you! Imagine my surprise. You know, I called them up and I said I had a box of junk I wanted to drop off and they said, nah, it doesn't work that way.

Thanks to a guy named John Woodland who was a guitar tech with Soul Asylum for many years. Woody, he and I have known each other for a long, long time. And I had been doing something with the Smithsonian, having to do with Prince's yellow Cloud guitar. And Woody remembered that I was teaching lessons in the basement of Knut Koupee in '83 when that guitar was made, turned me on to John Troutman, the guy at the Smithsonian who had collected that guitar as a curator.

We started talking about a couple of guitars that I have, that they may have some interest in. One: my '54 Les Paul and the other one, Bruce Allen from the Suburbs' '68 Les Paul. When Bruce died, he bequeathed that guitar to me. And I decided then that those guitars that destroyed the world, as they're called, should probably be in tandem for the rest of their lives. So we were talking about the adventures of the two of them and where they might go.

It turned out that [Troutman] was all guitared up, but was interested in some of the Commando stage gear that we talked about. So I sent those guys some pics of my jacket and my old Commando jackboots and some other stuff. And there, John was nice enough to say, I think we're going to collect your jacket. And I was pretty excited about that and tried to get him to collect all three Commando jackets — you know, in my mind, I sort of pictured that it was going to be like the Beatles, you know, and Madame Tussauds Wax Museum. You know, some diagram of us posing in our leather jackets, but I don't think it's going to shake out that way.

What what kind of stage regalia did you have?

these jackets in our case weren't stage regalia. I mean, we just wore them when we were on tour, and we did that because all the bands of our ilk, whether it was the Ramones or the Dictators or the Dead Boys or ourselves, that's just how we dressed. You know, it was sort of the punk rock uniform. And so everybody had Perfecto motorcycle jackets, and we were just another band in black leather motorcycle jackets. We started a tour in '78 in earnest with Pere Ubu, so all our jackets got around, and I had a lot of fun. But But I have to admit that I didn't wear it on stage that often. That wasn't our deal. The Ramones did that and they were allowed to do that.

This jacket really is a representation of that indie punk rock era, one that Suicide Commando were very foundational in. Is that kind of what they what they want with it?

They wanted to represent that punk was international, and it's spraying up in weird places like the Twin Cities, as well as places like London and New York City. So that's part of it is the historical aspect of the jacket. But the other part of it is that they wanted to bring something else from Minneapolis into the Smithsonian, besides Prince's Cloud guitar, just to represent the diversity of our scene. So that's pretty nice, too, right?

Yeah. And there was a great garage rock scene going on in the Twin Cities in the 1960s. But the story that I love, I only heard it a few years ago because folks started talking about, the Grandstand at the Minnesota State Fair and some of the bands that came through in the 1970s: the fact that the New York Dolls played the Grandstand stage, which I couldn't believe.

Well, they didn't, for starters. They played off in another part of the State Fair, I think it was called Pioneer Village. There was a stage over there, and I'm pretty sure James Gang played one year and some other bands, but the the year the New York Dolls played there, me and Commando Dave and my girlfriend at the time went over and saw the New York Dolls. And, you know, we knew about them already, and just loved them. So we talked our way backstage and made friends with them, and I got all the Dolls to sign my white Levi's jacket, which a couple of years later I subsequently washed. Hubert Humphrey had signed the same jacket too, and all their signatures came out. So my advice to everybody is never wash clothes. You might think you're doing it for hygiene reasons, but you can erase valuable history if you do that.

Anyhow, we became friends with the Dolls and in particular, Sylvain Sylvain and David Johansen were the most talkative and Johnny Thunders was the grumpiest. What impressed me about him is that they could barely play, but they were really great. At the time that had a real profound effect on me, because [at the time, circa 1975], the bands on the radio were all people that could really play but were really boring, right? And here was a band that could barely play and they were the opposite of boring. So I grilled them. I wanted to find out how they got their record deal. And they told me and so we just copied them.

So we talked about the jacket, your motorcycle jackets. [You] also [donated] a guitar pick. Now, was it any old guitar pick? Or was it something that you'd been holding on to?

It's one of those very hard to find "Your Pal Chris Osgood" guitar picks. I had those made by Ernie Ball. Somebody told me how to do it. And I liked white picks because if I dropped them, I could see where they were on stage. And so they're white with black lettering and there was a 20-year-old one of those in the pocket in the front pocket of the motorcycle jacket. I just sent it along with a jacket.

If there's it the one song that I just when I think Suicide Commandos, I think "Burn It Down." Because, I mean, you guys literally burned it down.

Well, we did. We shot the video for that before there were videos. There was a guy named Chuck Statler, and he was back in town. He'd worked with a band that we really liked, called Devo. And they were from Ohio. They were also very funny. And he made this little movie of Booji Boy sticking a fork in a toaster, and he wanted to make a little movie like that with us. Again, MTV hadn't been invented yet. So there was no place to show these videos. But I knew that utopia house where we lived in Minnetonka was going to be burned out. We had lived there for two and a half years with no heat, no running water, because we were out playing a lot. That house got condemned and I knew that they were going to burn it down on a certain day for firemen's exercise. So I wrote that song, and we set up in the driveway of our own house. Well, it burned down.

And you literally said goodbye to what I heard was a pretty epic party house.

Yeah, the parties would start at about four on a Friday afternoon, and they would get over at about noon on Monday. Honest to God. And we got into this deal where people would bring their old cars over and we would smash them up with sledgehammers. That was one of the things that we did for fun.