On Thursday, June 24, The Current is hosting round 10 of Sounds Like Home. Join an incredible lineup of Minnesota musicians as we meet up on the internet for a virtual festival. 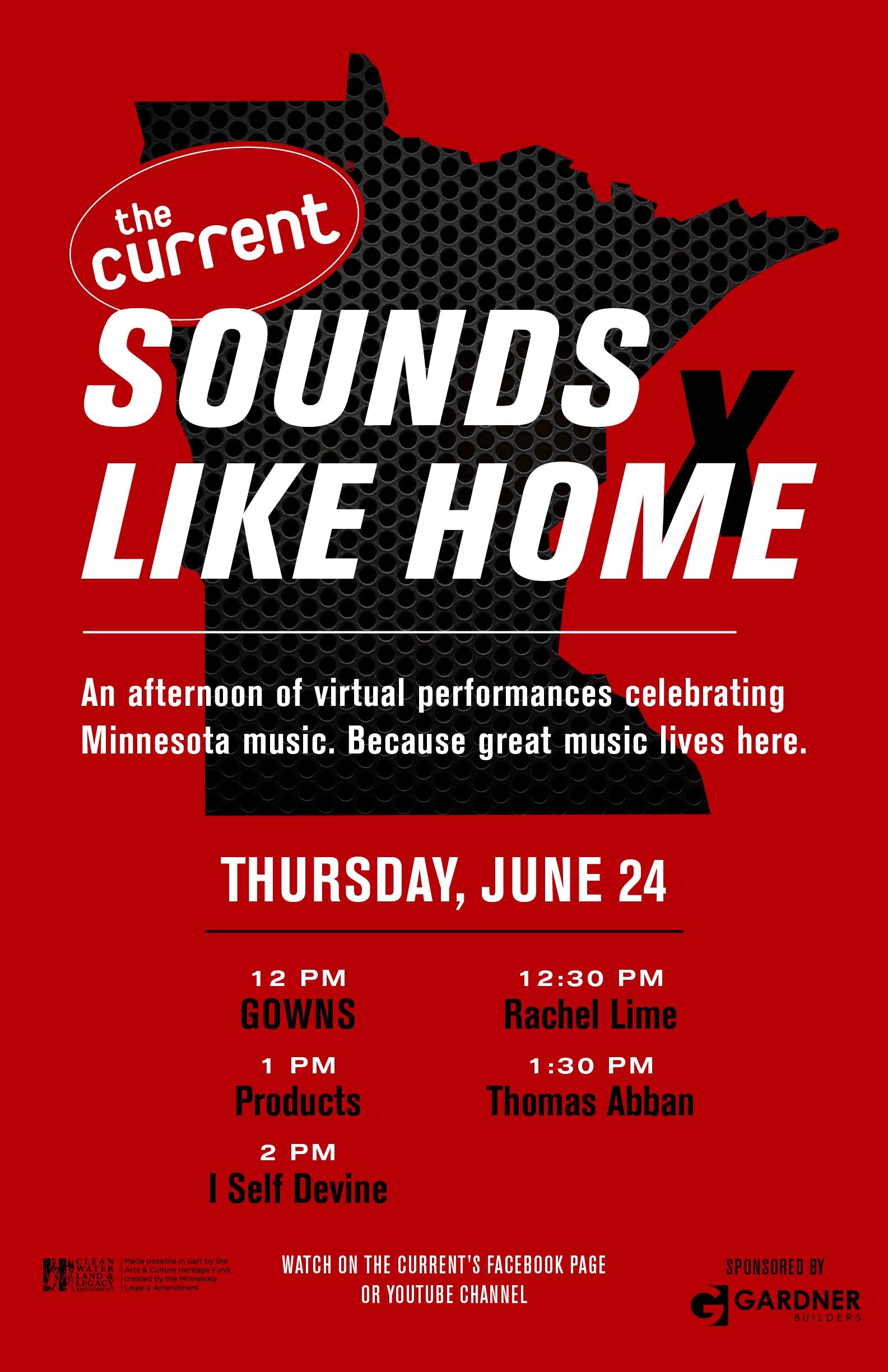 GOWNS Balanced between pop hits and rock-band riffs, GOWNS are an anthemic alt-rock band based out of Minneapolis. John Bair (vocals and keys), Zach Reiff (drums), and Andrew Okland (bass) are transplants from West Virginia and North Dakota, and Evan Willie (guitar) and Bryan Stanley (guitar) are Minnesota natives. Over the last year, GOWNS have taken advantage of the lockdown and found themselves writing and recording new music. With four singles released since October of last year, GOWNS are gearing up for the release of their debut full-length album, set to be available later this summer.

Rachel Lime Rachel Lime is a musician/songwriter/producer based in Minneapolis. She grew up listening to church hymns and folk songs, and the first songs she wrote were settings of poems from fantasy books. Her sound is rooted in queer universes, sentimental and strange, riding that silvery line between the mystical and the Bop(TM). A Korean-American adoptee, she was born in Seoul and raised amidst the cornfields of Minnesota. Her songwriting is accordingly both alienated and sentimental, searching for that elusive place in-between. Her debut album, A.U, came out in June.

Products Products are a band from Minneapolis. They are Alex (he/they), Jack (he/him), Jo (they/them), Konner (he/him). After playing in local groups like Frankie Teardrop, The Florists and Posh Lost, Products got together in early 2018, and have since toured and played with bands like Dehd, Shopping, Bodega, The Mystery Lights, and Tenci. Their debut LP, Pink Puma, was released spring of 2021 and finds the band moving away from no-nonsense fuzz punk into the broader world of left-field rock music -- drawing inspiration from late '70s/early '80s melodic punk/post-punk/art pop as well as modern iterations of this sound.

Thomas Abban Following up on his highly regarded 2018 release, A Sheik's Legacy, the captivating multi-instrumentalist Thomas Abban has returned to the studio. The guitar prodigy has picked up accolades from across the board, and was The Local Show's most requested artist when he made his entrance to the Minnesota music scene. An enchantingly mysterious prescence, his recent release The Cure finds Abban's sound continuing on his timeless trajectory, weaving complex rhythms and experiemental rock into a stadium-worthy anthem.

I Self Devine A Bush Foundation fellowship recipient and Roy Wilkins Center for Human Relations and Social Justice fellow, Chaka Mkali, who goes by I Self Devine, is an emcee, community organizer, strategist, racial justice trainer, graffiti artist, and muralist. Mkali is also the director of organizing and community building at Hope Community, which seeks to create connections that strengthen the power of community members and communities cultivating leaders and building capacity. He resides in Minneapolis.

Thank you to Gardner Builders for its support of Sounds Like Home IX.

At The Current, we are dedicated to bringing you closer to the music, artists, and other music fans. But we can't do it without you. Please support The Current with a gift in any amount. Your contribution ensures artists and music lovers have a place to stay connected.