Last night I wore Crocs to Prince Rogers Nelson's house. I know many of you may be scoffing at such a bold statement, but I gave up caring what people thought about me and my impeccable style at birth. After viewing the new "Beautiful Collection" of shoes at Paisley Park, I feel like Prince did that, too. The man had the most iconic, crop top-tacular, jaw-dropping, ass-out, innovative style, and he owned over 1200 pairs of shoes. Can you name a badder bitch? I think not.

Starting today through at least the end of the year, Paisley Park presents "The Beautiful Collection" to the public, showcasing over 300 pairs of Prince's custom-made shoes. He wore them on some of his most memorable tours, at press conferences, for performances, during his downtime, and in photos. This is the first time a collection of Prince's shoes has been on display in all their glory. We got a sneak peek in 2018: When the Super Bowl came to town, Paisley Park had a pop-up on Nicollet Mall. Also, if you've been on the Paisley Park tour, there's a pair of platform sneakers in his office (next to a cat carrier — and he didn't have a cat? MYSTERIOUS!) on the floor near his desk. 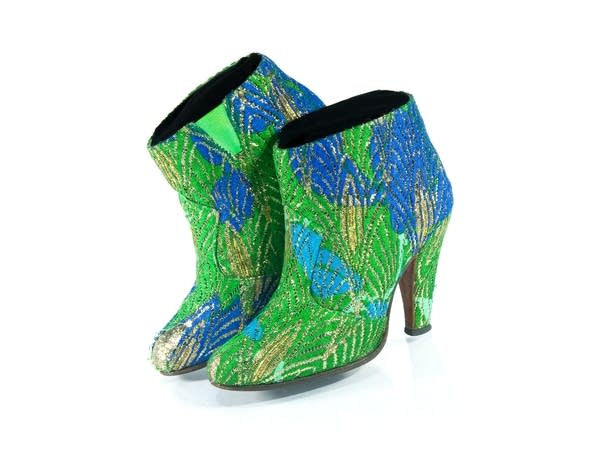 The room holding these beauties is located just next to the Purple Rain/Studio C part of the Paisley Park tour. Custom-made cases cover an entire wall of this room. Literally floor to ceiling, nothing but shoes. And the lighting in the room focuses your attention on the shoes, like they were onstage and lit by their own spotlights.

Some shoes stood out immediately: the hand-painted cloud boots from the "Raspberry Beret" music video, his furry knee-high boots from the Welcome 2 America tour, and the shiny orange heels that matched the orange outfit he wore to the 2015 Grammys, where he delivered one of his most memorable quotes, "Like books and Black lives, albums still matter." 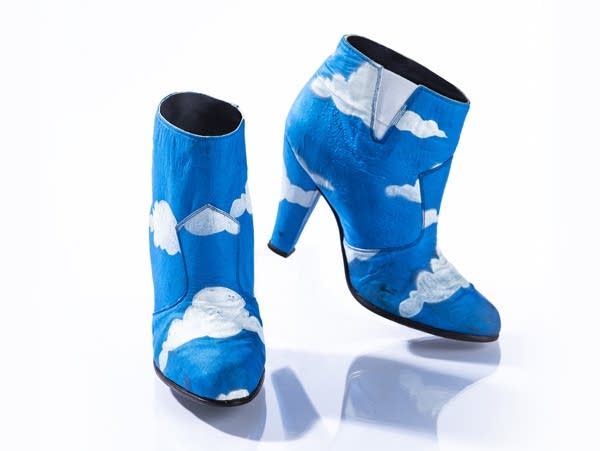 Then there were so many others where I wonder how I missed them. Like, remember the comic-book print from the Sign O' The Times-era denim safety-pin jacket? There were shoes with that print. There were shoes he wore when he wasn't performing, like light-up roller skates for hanging out with friends and custom platform flip-flops he wore as house slippers. (No Rollerblades from the Batman crop top photo, though!)

My favorite part of these shoes were the zipper pulls. I knew the love symbol would be on many of them. But throughout this collection, you also see the original version of the love symbol, peace signs, the Lovesexy heart, and even the Batman symbol as zipper pulls (also tons of Batman imagery on the toes of many shoes). Once again, this man and details. 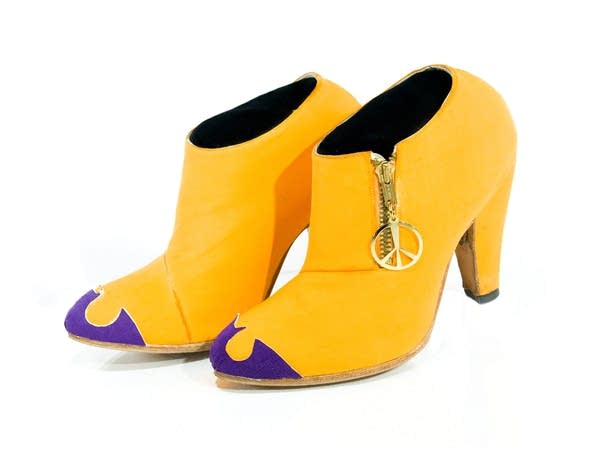 These shoes sport a Batman symbol on the toe and a gold peace sign zipper pull. (Tony Sylvers / Courtesy of the Prince estate)

Shoes can make your outfit, and from the looks of this collection, Prince definitely knew that. He jumped, kicked, split, and twirled in these babies (there is literally a section of the exhibit called "Friction Burns" that shows you how he wore down shoes and broke heels from dancing), so you know they had to be top-notch. He worked closely with designers like Andre No. 1 and Cos Kyriacou to make sure these were more than just shoes — they were part of the Prince experience. A Donatella Versace quote from the exhibit says he was the epitome of the Versace brand. This man's impact on fashion can not be overlooked.

I wouldn't say you can tell everything about a person from their shoes, but you can tell Prince's impeccable attention to details didn't stop at his music. His clothing told a story, and these shoes are a huge part of it. Using shoes as a form of artistic expression isn't new by any means, but I believe he perfected this.

One of my favorite quotes from Prince, featured on a mirror in the room under some lyrics from his song "Style," starts with him talking about a time he and his bandmates entered First Avenue. All these other club kids were staring, because he and the band had signature, singular looks: "Once you got your thing right, you'd stop looking at someone else. You'd be yourself and you'd be comfortable." That honestly is what personal style is all about: doing your own thing and living in that truth. Prince did that, and he empowered so many of us to do that, as well.