In a new Disney+ special, Billie Eilish showcases the entirety of her sophomore album Happier Than Ever. Here's a very subjective list of ten things I liked about the Hollywood Bowl concert, which I'll be discussing with Jill Riley on The Current this Friday, Sept. 10 at 8:30 a.m.

I had to Google "Hollywood Bowl onstage pool" to get the story behind this; it turns out there was an onstage pool for decades, until it was drained in 1972. Way to bring it back, Billie! Spoiler alert: Happier Than Ever may set a Hollywood record for most time spent onstage near a pool without anyone ever falling in. 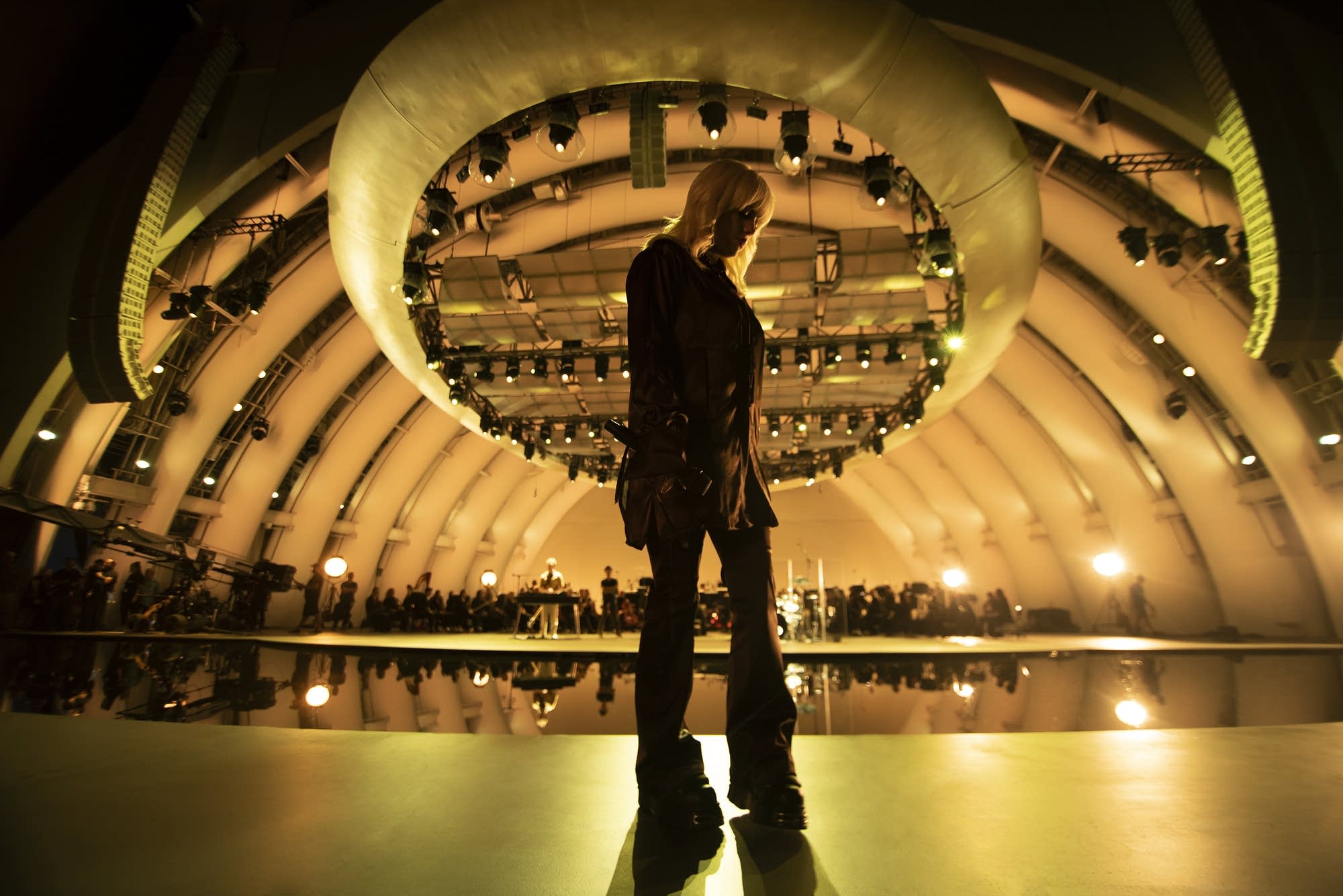 Billie Eilish in 'Happier Than Ever: A Love Letter to Los Angeles.' (Disney/Mason Poole)

"To me, the ideal audience-to-artist relationship is [a] one-to-zero relationship." That's a quote from the pianist Glenn Gould, a famously eccentric recluse who was among the first classical artists to embrace the recording studio as a uniquely intimate means of performance. The fact that Billie Eilish is performing to a sea of empty seats (*cough*, Covid) makes Happier Than Ever a show delivered very specifically to the streaming viewer. She banters as though a crowd were present...because, of course, she's actually playing for potentially millions of viewers.

The famed Brazilian guitarist joins Eilish for her song "Billie Bossa Nova," and assuredly, he keeps his phone locked for the duration.

It's on Disney+, lol

Disney+ is still trying to woo an audience beyond the Star Wars stans, Marvelheads, and Disney die-hards. Even Hamilton, Taylor Swift, and Billie Eilish might not be enough to convince people to drop their Netflix subscriptions, but there's something particularly apt about booking Billie — who wasn't a Mouseketeer, but would have definitely been a fan favorite if she was.

Homecoming runs 137 minutes and could have easily gone on for another two hours...but even Billie Eilish is no Beyoncé, because who is? Concert films can get, let's be honest, a little long. At a trim 65 minutes, Happier Than Ever contains Eilish's entire new album and nothing more — nor does it need to. How will the artist transform her past material for her platinum blonde era? You'll just have to pick up a concert ticket to see...whoops, they're all sold out. Maybe we could use another concert special (after an intermission).

Billie's brother and musical collaborator Finneas gets the power position of last name in the special's opening credits, like Wells the bartender in Bachelor in Paradise. While the star looks resplendent in a black pantsuit, Finneas just about steals the show with a pair of polished white loafers that would make even Pat Boone jealous.

One complication with having an orchestra in your show is that they all need to shuffle offstage when they're not needed — or sit patiently in their seats, subtly loosening their collars and kicking off their pumps. Solution: make it a televised concert, where the entire Los Angeles Philharmonic (and their celebrity maestro Gustavo Dudamel) can magically appear and disappear. In one of the show's most memorable moments, day suddenly breaks as Billie's not-for-swimming pool is surrounded by members of the youth choir she grew up singing in.

This spoken-word piece was introduced to fans as a short film that was part of Eilish's short-lived 2020 tour, with the star rising out of an inky pool to share her frustration at having her body continually be such a central point of conversation. In the new concert film, "Not My Responsibility" is dramatized with striking two-tone animation.

Tuba player Douglas Tornquist gets a brief but glorious moment in the sun playing the poignant bleats that accent "Therefore I Am." Wah-wahhhhhhhh.

The film is subtitled A Love Letter to Los Angeles, and Eilish embraces the city's iconography as her animated avatar cruises moodily around the City of Angels between songs, ultimately dodging the paparazzi to take a front-row seat at her own show. Although there's a lot of Los Angeles we don't see from the front seat of a convertible cruising down the Sunset Strip after dark, it's moving to hear Eilish pay tribute to the city where she grew up. Better Than Ever certainly isn't a love letter to the target(s) of its thorny lyrics; by opening the concert up to the city, Eilish and her collaborators add a welcome dash of warmth.