It's impossible to know what Prince would have made of the book just published under his byline, and it's probably best not to speculate...but you have to imagine he'd be happy to feel the weight of it. Both literally and figuratively, it's a heavy book, its 280 pages printed on substantial stock and bound between purple covers with a gold dust jacket.

The Beautiful Ones is one of the signal publishing events of 2019, and it's also one of the most poignant. In the last months, indeed the very last days, of his too-short life Prince was actively working on a book project that was, even by the iconic musician's own high standards, ambitious.

"Can we write a book that solves racism?" he asked his collaborator Dan Piepenbring.

Of course Prince didn't actually think he was about to solve racism with a single book — he didn't even wait for Piepenbring to venture an answer before peppering him with another question — but he was certainly thinking about his memoir as an opportunity to advance high-level conversations around race, music, and creativity.

For all its author's vast vision, The Beautiful Ones is most crucial in the way it brings Prince down to earth. Although he was often spoken of in the loftiest of terms, and didn't always mind labels like "genius," he told Piepenbring he didn't like being called magical. "Funk is the opposite of magic," he said in one of their conferences. "Funk is about rules."

Prince learned the rules so he could decide for himself when to follow them and when to break them, in every realm of his life. The same was true of his memoir. He knew he wanted a collaborator from the literary world, but he was specifically drawn to Piepenbring in part because the relatively young writer-editor had never actually written a book. Prince wasn't looking for either a biographer or a ghostwriter, but someone who could help bridge the gap between his personal expression and the publishing world, not to mention between himself and his readers.

Piepenbring tells this story in a long introduction, much of which was published last month as a feature in The New Yorker. Piepenbring came into the project in January 2016, less than three months before Prince's tragic accidental death on April 21 of that year. His introduction recounts a series of conversations the two men had over the succeeding weeks, which turned out, for Prince, to be an unprecedented period of active public engagement with his past.

The Prince known to fans for decades was always looking forward, rarely looking back. "I don't know why people need to do that," he told The Current's Andrea Swensson in 2014 after we published some of Bobby Z's reminisces about the music of Purple Rain. When he briefly acknowledged the film's 30th anniversary at a Paisley Park show later that summer, it felt like a shocker.

You might call that acknowledgement the tip of an iceberg, except that the memories flowing forth from Prince himself over the next couple of years were anything but icy. Fans who attended his Piano & a Microphone solo shows, particularly the very first such show at Paisley Park, heard him speaking so generously and candidly about his family and formative years that video recordings of the show (still unreleased, though screened occasionally at Paisley Park events) are quoted in the new book as crucial testaments.

Prince also left the first material for the book itself: about 30 handwritten pages. In The Beautiful Ones those pages are reproduced as written, and also transcribed for easier reading: "Prince's handwriting was beautiful," notes Piepenbring, "but it also verged on illegible." 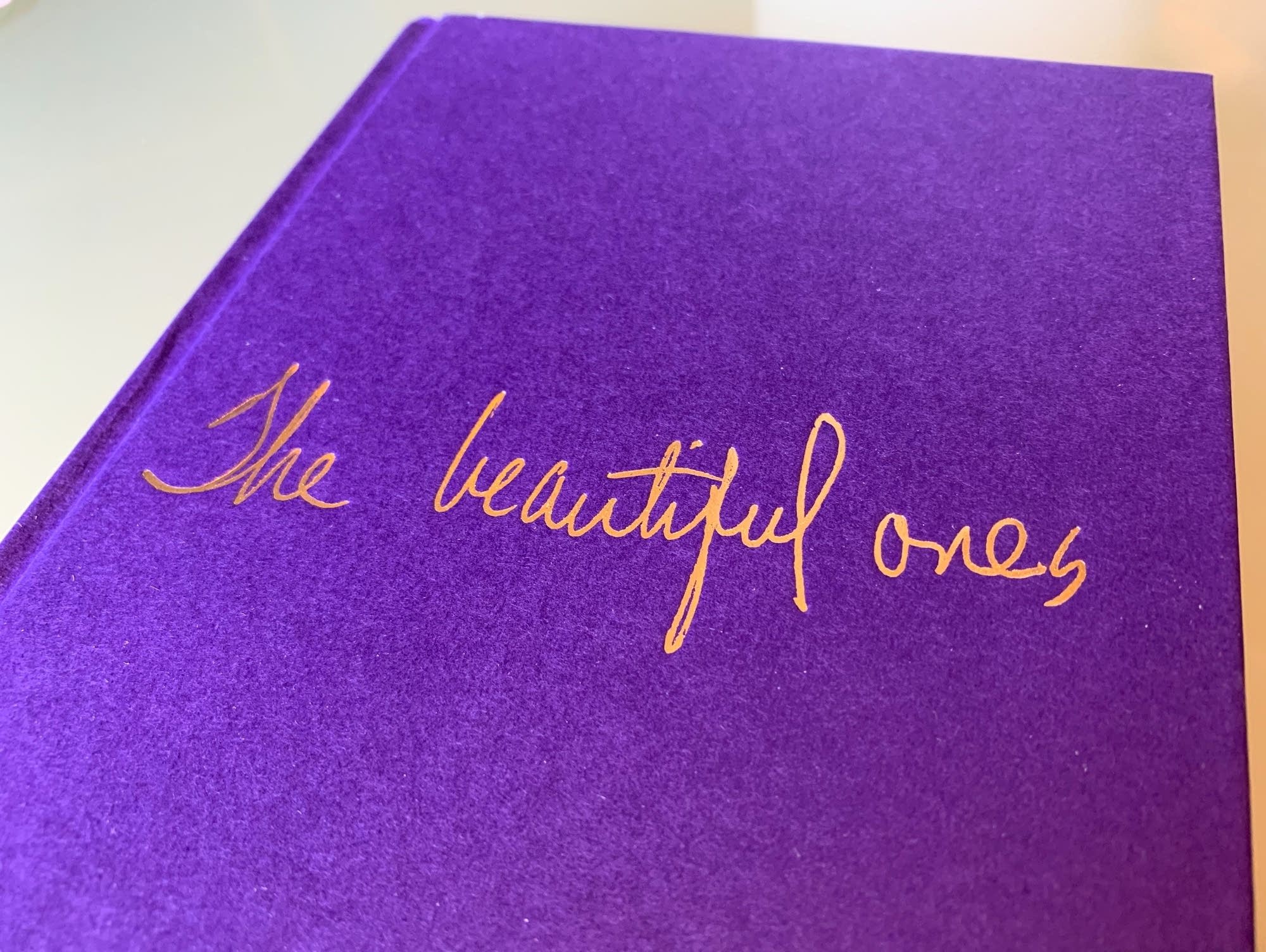 Those pages, of course, are the heart of the book, and although they don't discuss Purple Rain (aside from the words "When Doves Cry" written in the margin of a page about his parents' divorce), they may be the first 30 pages many of Prince's truest fans would have wanted to read even if he had finished the entire manuscript.

The artist, who was rarely forthcoming about his Minneapolis childhood, here writes about his parents — starting with the opening paragraph about looking into his mother's eyes, his earliest memory — and about his sister Tyka, who "told me eye was good at everything and eye believed her." He writes about his early epileptic seizures, and about his given name: his father's stage name, which encapsulated the elder Nelson's hopes and also the tension between his parents.

The Beautiful Ones additionally includes an early handwritten treatment for the semi-autobiographical film Purple Rain, which might sound like a sort of stocking stuffer used to fill out the book, but in fact it's a perfect complement to the memoir pages. Reading it alongside that tender document illustrates how Prince built his mystique on the foundation of the actual tension that gave form to his inner life.

Prince is 19 years old and has spent one half of his life playing music and the other half trying to figure out who he really is. Is he his mother — drinking and swearing and coming on to another human like it's the only chance he'll get? Or is he his father, conducting life as though God were watching every breath — chauvinistic, stubborn, and quick to explode?

The treatment, like the finished film, has the Prince character born of a biracial union. Though in reality both of Prince's parents were black, he grew up listening to the local rock station and started a high school band that could play anything from deep funk to Grand Funk Railroad. In the treatment, Morris Day lives in the "predominantly black" downtown, Vanity lives in the wealthy suburbs, but Prince lives in the diverse, middle-class, liberal "Uptown."

You could write a book on this book, and doubtless someone will. The Beautiful Ones, though, largely leaves the analysis of Prince to Prince. The fourth major component of the book is a stunningly intimate selection of images, notes, and lyrics that Prince kept close to him at Paisley Park. Some of this material was in the Vault, some of it was in storage elsewhere, and one photo — of Prince and his '80s bodyguard "Big Chick" standing in front of the purple house on Kiowa Trail — was framed in his Paisley Park dressing room.

That latter piece of information is found in the detailed notes collected in the back of the book. Saving the captions for their own section helps readers encounter Prince on his own terms, whether sitting contemplatively among keyboards at Sound 80, posing with Morris Day in character as his alter ego "Jamie Starr," or sitting for a sweet grade school photo. Even if the book had only this photo collection, it would be a major event: previously unseen pictures include early images of Prince with his parents, and an alternate version of a Grand Central band photo in which the band members are holding letters spelling out the name of the band.

The book's title was selected by Prince, and the handwritten lyrics of the epic Purple Rain ballad are reprinted near the end of the book. What might be most telling about the title is that it's plural. Prince could have followed in the footsteps of other music memoirists and called the book Me, or I Am Prince, or Purple Rain.

Who are "the beautiful ones"? It could be very literal, the beautiful people. It could be about his parents, or his family more generally. It could encompass creative visionaries, or the African-American community, or everyone Prince was making music for, that is to say the whole human race. The most likely answer might be: yes, all of the above.

If you read all the way to the bottom of the lyrics as Prince first wrote them, you see a couplet that didn't make it into the finished song, but that fits perfectly here at the end of this essential, inspiring, touching book. "The beautiful ones, sometimes u lose," he wrote in 1983. "But lemme tell you sometime, sometime u win."

Tune in to The Current at 8:30 a.m. (Central) every Wednesday morning to hear Jay Gabler and Jill Riley talk about a new book. Also, find Jay's reviews online.

Nov. 6: Jack and the Ghost by Chan Poling, illustrated by Lucy Michell

Nov. 13: Wham!, George Michael and Me by Andrew Ridgeley

Nov. 20: Janis: Her Life and Music by Holly George-Warren