Middle Kids join The Current to play songs from their latest record, 'Today We're the Greatest'. Frontwoman Hannah Joy catches up with Maddie about the themes of reflection and space on the record, writing on the road in America, and recording in a studio for the first time.

HANNAH JOY: Greetings, we are Middle Kids. Welcome to our studio. We're in Sydney, we wish we were in Twin Cities for The Current but happy to be playing some songs for you. This is called "Stacking Chairs".

MADDIE: That was just Middle Kids here for another one of The Current's virtual sessions. I'm Maddie and today I have the pleasure of sitting down with Hannah Joy of Middle Kids and talking a little bit about their new album Today We're the Greatest but before we get into chatting we're gonna listen to a couple more songs.

Well hello, Hannah joy. It is so good to be sitting down with you. How are you doing today?

Hey! Good, great to be with you. It's very fresh here in Australia but very happy to see you.

I know your new album came out on March 19. How's it felt having it out in the world?

It's been awesome. We made it over a year ago so it's kind of been haunting us. But now it feels really good. It's brought a lot of energy around it for us again. So it's been a very special time for the band.

Do you feel like your feelings around the album have shifted from the time that you initially recorded it a little over a year ago?

Yeah, I almost forgot what it was. So it's been really nice hearing it again and revisiting it. After all this time it just feels like a cool representation of us and expresses us still in this time, which is really nice as an artist to still feel connected and like the songs even.

Yeah. This is your second album, you released another one back in 2018. How did it feel, or what was the differences between recording Today We're the Greatest compared to your first release.

This one was pretty different. We went into a studio for the first time, which is kind of big for us, because usually we never leave the house to make music. We tried the studio before, but it was scared us. So for this, we took the step and we did it. We had a really awesome time, we did it with Lars Stalfors in LA. Even just having someone else's voice, creative voice in that process was very different. But very wonderful for us, too, it was cool. I think Lost Friendsi>, our first record was made--a lot of that was actually, I wrote in America while we were touring so much and really influenced by kind of the live show-ology, and this is a little bit more reflective and has a bit more space. It does have a different vibe. We were really wanting to go into new territory, and kind of express another side of our sound. So that's why we tried to make it quite differently.

Yeah, it's kind of interesting thinking about the timing of that, you guys wrote this introspective record with all this space before any of us entered lockdown. Now it feels like it's a little bit of a mood that a lot of us have been in.

Yeah, it's true. A lot of people have asked, like, "When did you write this?" Or some of the things really relate to pandemic times, which I don't know, maybe we just felt like, isolated. Yeah, it's funny.

You mentioned that when you were writing "Lost Friends," there was a lot of time pressure, because you were on the road constantly. But I understand that there's kind of a different time pressure when you were recording Today We're the Greatest based off the fact that you had your child on the way! How was working within those time constraints?

That was so wild, but I'm really glad in some ways, because yeah, we didn't obviously know what was gonna be, like the year following. But yeah, I was seven months pregnant and we had a big national tour in Australia, when I was eight months pregnant, so we had this tiny little window to make this record. I wasn't sure how it was gonna go because at that time, I was pretty huge and the baby's like sitting right on my lungs. But it worked well and I could actually sing two notes lower than I can now, which is a bit of a--because there's actually a song on the record, where there's one note, I like, can't sing that. So I guess I'll just have to get pregnant again.

Yeah, by the time live shows come back, you're going to need to hit that low note.

Yeah, there you go. Expand your vocal range in an unconventional way. With Middle Kids being such a live band, a band that's toured so much, how has your perspective on the project changed over the past year?

That's a cool question. It's been so weird for us, because the existence of Middle Kids has been one of such touring, but it's been a really special time for us to just take a beat, and then be a lot more thoughtful about where we want to go because when you can get in that touring rhythm, you're just kind of moving all the time, and you're very present, which is awesome. But it's hard to then also be like, where do we want to go even creatively? So it's been cool to have more space to kind of sit in the stillness of this season and even find the music in there and just gear up again. Now we feel even more excited to get out there. It's been hard, but in some ways, I think it's been really good for us.

Yeah, it looks like you have a couple shows on the calendar for the next few months. How does it feel getting ready for shows for the first time in a year or so?

Yeah, it's pretty wild. We're very lucky in Australia, in terms of just where we're at with the COVID stuff. It's cool that we get to play the shows. We feel with this record it will change the live show a bit too, because it's not just--I can't just get on stage, like, just rock out and be like, "Yeah!" And then get out of there. There are a lot more songs that--a bit more vulnerable and quiet. I'm like, how am I gonna do this? This is new for me. But it's really good and important as an artist to kind of stretch. We actually feel really excited to have this kind of new energy in our live show. 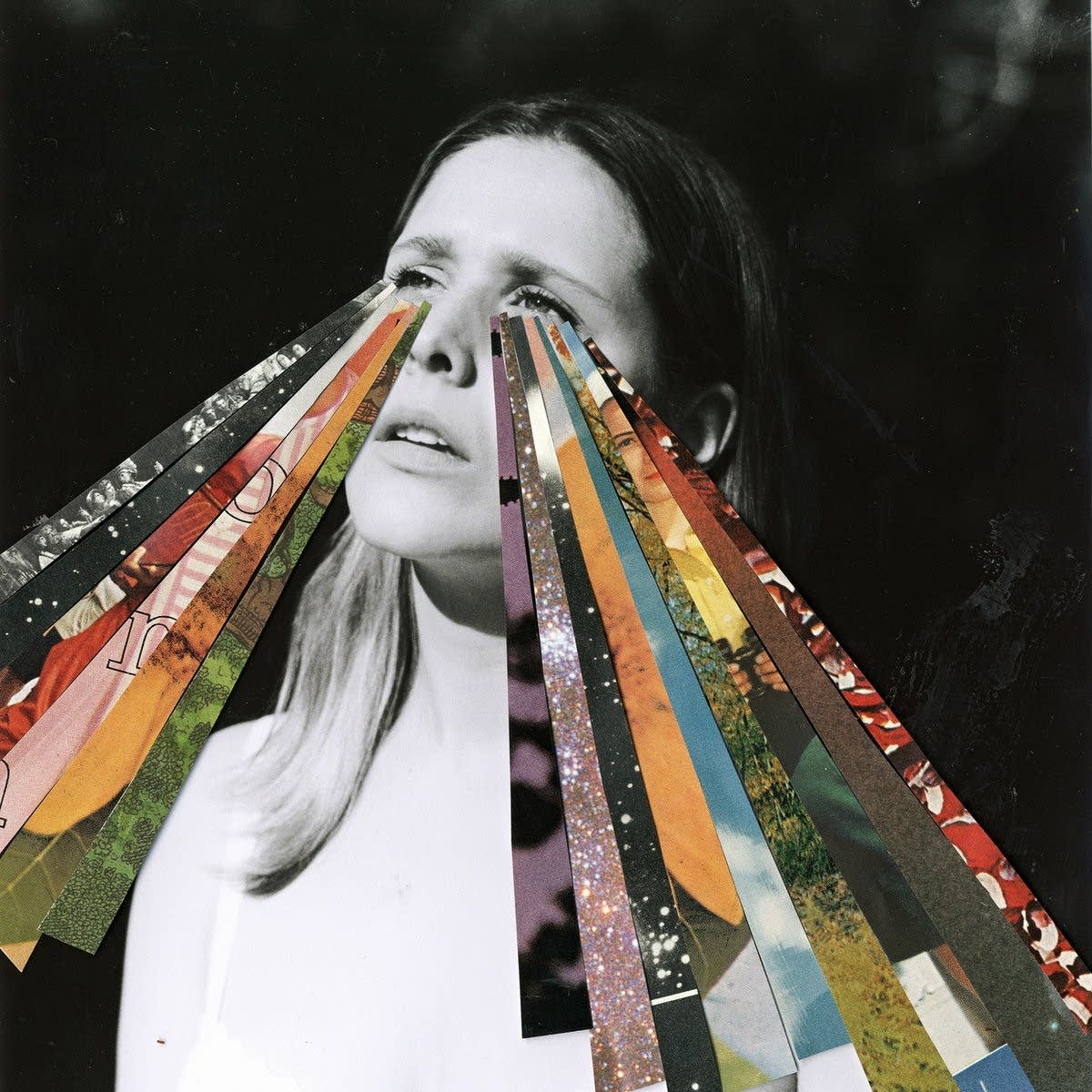 You mentioned that there's so many lyrics on this album that are so vulnerable and so personal. Is that something that comes naturally to you in songwriting? Or is it a challenge to put yourself out there with your music?

It is a challenge. In some ways, when I write music a lot of it is quite subconscious, or just is whatever flows out. Probably a lot of that was due to being pregnant and writing and being in a certain place, feeling quite reflective like, "What is life? I'm about to have a child, I need to figure it out." I'm generally striving to be more vulnerable as a person, and that always infiltrates your art. I think there is a beautiful relationship with your own personal journey, and then how that comes out. I think that's been probably a natural flow from there. Yeah, absolutely.

The title of this album is Today We're the Greatest and that's that last track, which is a pretty big number--very emotional track on the album, how did you decide on that as the title for the album? What does that represent for you?

Well, we liked that as a cool proclamation, especially because the record finishes with that. I think that song really embodies a lot of what we sing about and what we try to explore as a band. Mainly being, like, how can we live well, and in this song, a lot of it's about living our small little lives and showing up and being present, and doing the boring everyday things, but also, like, you get the magical, beautiful things. Then there's also the lonely grief-ridden things. And that's life, that's all of that. A great life is when you can be present and live all of that. It was cool to kind of shape the record around that.

Celebrating those everyday things and not missing out on that is certainly present throughout a lot of lyrical themes here. I had read that you and Tim wrote the song "R U 4 Me?" which we just heard earlier today, from scratch, and that was kind of a different songwriting approach to you. Can you talk about that a little bit?

Yeah, that was a really cool thing, because we're married, and we don't really write together. I will usually write a song, and then I'll give it to him to tinker with it. We were in LA, and I was doing a bunch of writing over there and we decided that we would do like a session together. He would be the producer and I would be the others and we'd meet at a studio and write a song, kind of my roleplay but for work. It was just really cool. We did that and carved that space out. The song just kind of came and there was a really exciting energy and we just loved making it together. It was very cool experience and I think probably quite significant in terms of showing us that is something we can do together. It was really fun.

That's awesome. To explore both the personal and the musical sides of that relationship is really really cool. I think you definitely hear it on that track as well--it feels like you have both of those things meshing.

Yeah, well, thank you so much, Hannah Joy, for sitting down with me today. This has been another session with The Current. You can check out Middle Kids newest record, Today We're the Greatest. I want to give thanks to Veronica Rodriguez, the producer or the engineer for today's session, as well as producers Jesse Wiza and Derek Stevens. Also thanks to the members of Minnesota Public Radio for making it all possible.