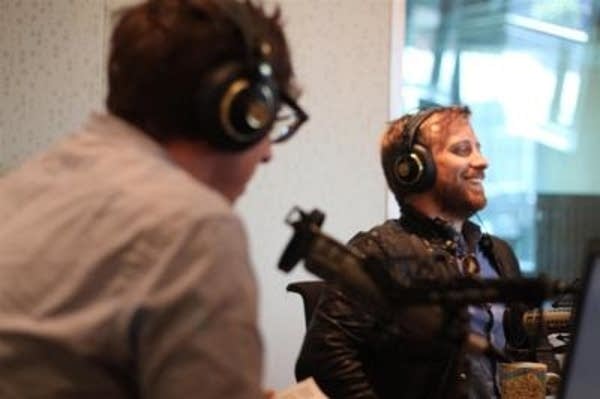 The popular line is that the Grammys™ are permanently out of touch - either rewarding established veterans or teenybopper flavors of the week. But over recent years, we've seen a gradual shift towards an embrace of the "alternative" side of the music industry, as evidenced by Arcade Fire winning Album of the Year and Bon Iver winning multiple awards, including Best New Artist. This year's Grammys (the nominations of which were announced Wednesday night) have the greatest overlap with the Current's everyday playlist than any other year in our history, which is both interesting, and really exciting.

Album of the Year


In the Album of the Year, traditionally regarded as the most prestigious Grammy category, all five records have made an impact in the Current playlist over the last year. Four of the albums featured multiple hits, and the fifth featured a gigantic, global hit. The nominees include Frank Ocean, for his Channel Orange, which is being heralded as a landmark of contemporary R&B; Mumford and Sons, for their sophomore smash Babel (the band is no stranger to the Grammys, picking up a handful of nominations last year for "The Cave"); Jack White, for his solo debut Blunderbuss (although he's been nominated in this category before, for the White Stripes' Elephant back in 2003); the Black Keys, for the raucous El Camino; lastly, FUN.'s debut Some Nights slipped into the Album of the Year category, bolstered by the international smash "We Are Young." (FUN., in fact, are in a position to pull off something that only Christopher Cross and Norah Jones have done before: a full sweep of the top four categories: Album of the Year, Record of the Year, Song of the Year, and Best New Artist.)

Record of the Year


Record of the Year also sees plenty of familiar names. In addition to FUN.'s "We Are Young," Frank Ocean's "Thinkin Bout You," and the Black Keys' "Lonely Boy," our friends Gotye and Kimbra are nominated for their terse "Somebody That I Used to Know." Our program director Jim McGuinn said last February that it was likely that Gotye and FUN. would be nominated for Grammys this upcoming year, and I sort of laughed it off, thinking the songs' effect would dissipate by this winter. I was wrong, and that's why Jim is the boss and I am not. The Record of the Year category is rounded out by Kelly Clarkson's "Stronger" and Taylor Swift's "We Are Never Ever Getting Back Together," whose title is really a pain to type.

Gotye: "Somebody That I Used to Know"


The Best New Artist category will also be exciting for regular Current listeners. Frank Ocean and FUN. (who could join forces as Frank and FUN. and terrorize the neighboring villages) are joined by Alabama Shakes and the Lumineers, each of whom have had multiple popular songs on the Current this year. With their crossover to contemporary top 40 radio, the Lumineers' nomination doesn't come as a major surprise, but I have to hand it to Alabama Shakes for their hard-earned success. Alabama Shakes are also up in the Best Rock Performance category, alongside the Black Keys, Coldplay, Bruce Springsteen, and somewhat puzzlingly, Mumford and Sons.


The Best Rock Album category also poses an intriguing battle between Jack White and the Black Keys, as well as longtime stalwarts Bruce Springsteen and Coldplay, with Muse (who are no commercial slouches themselves) rounding out the category. The Black Keys' Dan Auerbach will be a nervous gentleman on Grammy night, as he's also nominated for Producer of the Year, for his work on the Keys' El Camino, Dr. John's Locked Down, and Hacienda's debut album.


We may sometimes think of The Current as an "alternative" station, although that definition has become nebulous over the years. Artists on the Current's playlist appear in multiple categories ranging from rock, rap, Americana, dance, and, yes, alternative. With so many of the high-profile artists in the higher-profile categories, this means the Best Alternative Music Album category shapes up with some interesting contrasts. Tom Waits won this award in 1993 for Bone Machine, and he's back in contention this year for Bad as Me, and Bjork earns her sixth (!) nomination in this category for Medulla; maybe this will be the year she takes home her first Grammy. Gotye toes the line between pop and alternative, but evidently the more bizarre stuff on Making Mirrors was enough to slip it into this category. Fiona Apple, who was nominated here in 2001, returns for her The Idler Wheel effort, and M83 breaks through with a nomination for the epic double album Hurry Up, We're Dreaming. My inclination is that voters will recognize an established name like Bjork, Tom Waits, or Fiona Apple, although Gotye could ride a wave of success to victory in this category, kind of like Gnarls Barkley did in 2006 on the heels of "Crazy."


Lastly, I'm sure Bill DeVille is proud of the nominees in the Best Americana Album category: the Lumineers' self-titled debut, the Avett Brothers' The Carpenter, John Fullbright's From the Ground Up, Bonnie Raitt's Slipstream, and Mumford and Sons' Babel (hey, I thought they were in the Rock category...never mind). Dr. John picked up a nomination in the Best Blues Album category for his Locked Down, and Minnesota natives the Okee Dokee Boys are nominated for Best Children's Album.

More than ever before, there are myriad "The Current" artists that are in contention for Grammy prizes this winter, which should warrant your attention come Feb. 10, 2013.

Theft of the Dial: Mumford & Sons

Theft of the Dial


Theft of the Dial

Theft of the Dial


Bad As Me Review

I and Love and You Review